The long read: From the Anthropocene to the Urbanocene: Understanding Asia’s rural out-migration and global climate change 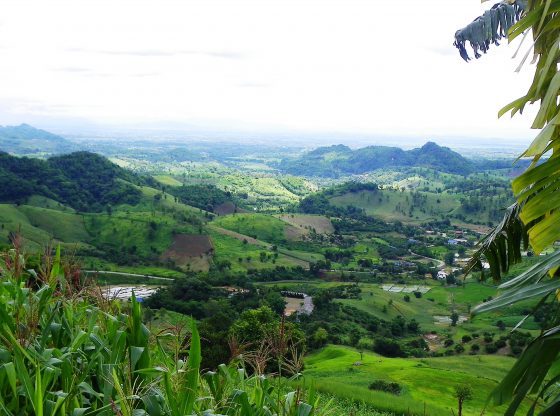 In addition to natural cycles of change, global climate change is driven by individual behaviours of consumption and life-style dynamics, which are intensified at the local level. Local-global dynamics of the drivers of climate change cannot be condensed into a simple 1.5°C or 2°C warmer-than-pre-industrial-level-planet problem, nor left to the authors of the Intergovernmental Panel on Climate Change (IPCC) reports to define. Global climate change is directly defined by and tied to what we ourselves do in living our daily lives, including during our hours of rest and sleep.

The rural out-migration to urban areas or the urbanisation of lifestyles is happening at record speed and on a scale the world has never experienced before.

I am typing this piece in the comfort of a 68°F temperature room, controlled by a thermostat in my house, which is located in the town of Northfield, Minnesota, USA, where the outside temperature is currently 25°F. As you are reading my article online, you will be using a computer/tablet/phone with an internet connection, (hopefully) sitting in a comfortable room or space, connected to a chain of computers and servers linked in to the World Wide Web, all the way to where this article is stored at Asia Dialogue. Both my writing and your reading, which might be considered productive activities, have a direct impact on climate change through chains of events, commodities, energy, and the actions of entities and individuals.

The changes in individual consumption behaviours and life-styles from the rural to urban are driving the local/global extraction of materials from the planet. Such that, because 59.89 per cent (4.46 billion) of the world’s population (total 7.2 billion) live in Asia, the continent plays a critical role in both climate change and the socio-ecological changes occurring on the planet. This population is slightly higher than the total combined population of the top ten most populated countries (4.35 billion) in the world. In other words, three quarters of the world’s population live in Asia. Three of the top five most populated countries (China, India and Indonesia) in the world are located in East, South and Southeast Asia, respectively.

At the same time, in a majority of Asian countries, rural out-migration to urban areas alongside the urbanisation of lifestyles is happening at record speed and on a scale the world has never previously experienced.  Therefore, one single issue that is critical to addressing global climate change in Asia is the transformation of the population from rural to urban, through rural out-migration to urban areas. It is this transformation, from the Anthropocene to the Urbanocene in Asia, that is the focus of this article. The world’s largest internal migration of rural people to urban areas has been happening on a remarkable scale in Asian countries ever since a majority of these countries became members of the World Trade Organisation (WTO) in 1995. The World Bank’s population database shows that 66.38 per cent of the world’s population lived in rural areas in 1960, whereas by 2017 this had reduced to slightly more than 45.17 per cent. In addition, the transformation from Anthropocene to Urbanocene is increasing at a rapid rate, with a clear upward trajectory by 2018.

Between 1990 and 2017 China was the leading rural out-migrating society in the world in terms of both temporary and permanent migration, followed by the countries of Southeast Asia. Thailand has also experienced a sharp decline in its rural population, which represented 80 per cent of the total population in 1960, falling to around 48.46 per cent in 2016. The steepest decline of rural population in Thailand occurred between 2000 and 2010, from 68.61 to 55.92 per cent. The steepest declines in rural population in China (falling from 73.56 to 42.04 per cent of the total population), Indonesia (from 69.42 to 45.34 per cent) and Malaysia (halving from 50.21 to 24.55 per cent) occurred between 1990 and 2017 (see Figure 1).

The rise in urban population in these four countries directly corresponds to the rise in their CO2 emissions during the same period (see Figures 1 and 2). One can readily hypothesise that a change in lifestyle from rural to urban demands higher resource extraction and increased levels of waste and pollution. However, the causal link between the rise in urban lifestyles and CO2 emissions is harder to confirm scientifically due to several other factors, including the increase in efficiency of urban infrastructure and the ecological economies of scale that urban settings may provide. If we look at Figures 2 and 3, we see that highly urbanised areas in the world maintained a stable trend of per capita CO2 emissions or significantly reduced per capita CO2 emissions between 1960 and 2016, regardless of the size of the country. I posit three propositions to link the theoretical and policy dimensions which emerge out of the transformation from the Anthropocene to the Urbanocence in Asia.

The first of these is that neither social scientists nor natural scientists have any clear-cut evidence or generalisable definitive data confirming a positive correlation – let alone a causal link – between the rise of urban lifestyles and the rise of CO2 and other Green House Gas (GHG) emissions over time (Figures 1, 2 and 3). The causal linkage can be inferred by the intensity of individual consumption and affluence, the uses/abuses of diverse and innovative energy sources, the efficiency of energy and resource uses due to technological innovation, and the level of environmental education among citizens. However, other factors might equally include how spatially efficient the public transportation and energy infrastructural systems are in urban areas, and to what extent urban design and the number of public spaces, such as parks and bike routes, induce a reduction in personal automobile-dependent culture.

China, Indonesia, Malaysia and Thailand have each experienced a similar trend towards urbanisation (Figure 1). However, Thailand’s per capita CO2 emissions are lower than China’s and Malaysia’s even though the population in Thailand is significantly lower than the former and higher than the latter. At the same time, Indonesia’s per capita CO2 emissions are considerably lower than Thailand’s (Figure 2).

In Figure 3, Luxembourg and the US show a reduced per capita CO2 emission level alongside the rise in urbanisation. Since people live spatially closer in the densely populated area of an urban setting, the spatial dimension might be helping to increase the efficiency of service provision and production, such as roads, public transportation infrastructure, access to hospitals and education, and further opportunities for social mobilisation.

This theoretical conjecture suggests that improved urban governance, alongside an efficient public transportation system, waste management system, provision of green public spaces, and diversification of energy sources, could lead to a reduction of environmental degradation in the Urbanocene, as well as reduced CO2 and other GHG emissions. The political ecology and economies of scale in large urban areas might therefore help to increase the efficiency of resource use and waste management, if proper public policy and governance structures are envisaged and implemented. As a second proposition, two immediate consequences can be identified once an individual decides to out-migrate from the rural to urban area: (1) there is an immediate loss of labour at the rural base; and (2) there are changes to the individual’s own life-style. These two immediate societal changes have an enormous ripple effect on the political economy and ecology of the society from which this individual comes. As the level of urbanisation rises, rural labour out-migration – especially of younger people – increases, as urban areas demand more labour with higher paying jobs. This labour loss in rural areas might then lead to an increase in the efficiency of agricultural practices assisted by better access to agricultural technologies, machines, fertilisers and pesticides. This could in turn increase the number of smallholder farms, as was experienced in Thailand between 1995 and 2017.

The rise of smallholder farms, along with selective industrial agricultural industries in countries such as Thailand, signals that urbanised rural populations might find their way to urbanising some component of their lifestyles, while continuing to live and participate in the rural agricultural practices associated with coffee, fruit and pineapple plantations. Thailand and Vietnam both seem to be managing this transformation to their economic benefit.

Similarly, Myanmar, having experienced recent economic changes, is showing signs of this transition in its rural settings. The majority of Myanmar’s rural youth are fleeing to seek jobs in urban areas in Thailand, Singapore, Malaysia, South Korea and other Asian markets with a high demand for labour. As a result, the restructuring of rural agricultural practices is occurring throughout Southeast Asia, which is experiencing a rise in smallholder farms. Thailand is a leader in this case, as Jonathan Rigg noted in a previous Asia Dialogue article.

This repositioning by rural farmers can be understood as the socio-ecological approach they need to take in diversifying their livelihoods, in order to guard against the possible risks involved in relying only on the newly emerging factory or urban work. At the macro national level, this presents an excellent opportunity for improved land and forest management practices, which can be enhanced to increase the production of smallholder farmers left with less land and lower labour input across the region.

The third and final proposition is that as smallholder farms increase their efficiency and agricultural output per hectare of land, conditioned by the rural out-migration of youth, other labour-intensive landscapes and land areas in rural Asia will experience re-vegetation, leading to the eventual reforestation of the landscape. Such a transformation will require rural farmers to adopt labour-saving agricultural techniques and technologies that will continue to influence social change and changes in lifestyle, even if the smallholder farms persist in rural settings.

The emergence of small and medium-sized food-producing smallholder farms might suggest that they are less of a threat for wholesale land clearance. Indeed, recent studies on deforestation in Southeast Asia have found that increased agricultural efficiency is positively correlated with the reforestation experienced in Thailand, Vietnam and the Philippines since the 1990s. This is a welcome change from the usual public policy perspective which posits that these countries do not need to adopt industrial agriculture, since this could stifle the food sovereignty of the local population and cause farmers to be dependent on conglomerate agricultural industries from abroad.

While urbanisation provides a solution, to some extent, for the diversification of livelihoods and securitisation against risks in a traditional moral economy, it is critical for communities and countries in East and Southeast Asia to balance this transformation from the Anthropocene to the Urbanocene, so that socio-ecological diversity and sustainability can be maintained throughout the region. Maintaining socio-ecological diversity and sustainability at the local level across the globe should ultimately help to address the climate change problem worldwide.

The rise of the Urbanocene in Asia highlights the evolution of the lifestyle of Homo sapiens from hunter gatherer and sedentary settler to urbanite. Ultimately, it is the consequences of this social evolution on nature and for the future of life on the planet that we are dealing with when we speak of climate change problems or the sustainability problem of the socio-ecological system. Using this historical perspective, we can recognise and address the consequences of individual decisions at the local level in terms of the transformation from the Anthropocene to the Urbanocene.

Tun Myint is an Associate Professor of Political Science at Carleton College, Northfield, Minnesota. His research examines the role of individuals and groups in the dynamic relationship between social changes and global environmental changes, with a focus on democracy, development, globalisation and sustainability. He is the author of Governing International Rivers: Polycentric Politics in the Mekong and the Rhine. Image Credit: Tun Myint.

Trash politics: Grassroots objection and the incineration boom in China
A view from somewhere: An alternative to globalised forms of climate knowledge