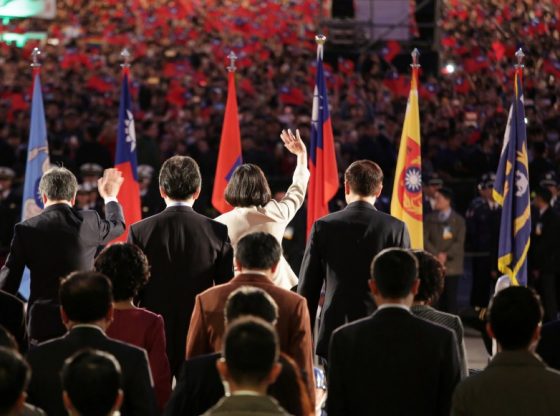 Identity Politics in the International Context

The global thesis is that industrial democracies have since around 1970 moved from a politics of social class, of trade unions versus private enterprise, to a politics of identity in which gender, ethnicity, local community and youth culture figure largely, perhaps to the point of erasing much of the salience of earlier capitalist industrial forms. This may be some function of the rise of the service sectors, employing far more educated youth, at the expense of manufacturing, it may result from impacts of social media, or it may arise from cultural convergence of democracies. But whatever its source or sources, Taiwan has not escaped the trend. Indeed, the confusions of democratic transition, slower growth with rising youth unemployment, and the fact that the major element in domestic politics since the 1980s has been that of the cross-strait relationship and the reaction of the mainland to democratic urges in Taiwan, may mean that it is ultra-sensitive to them. It can be argued that the results reflected the perceived failure, in particular, of President Tsai’s Chinese policy, a perception resulting from a retreating sense of ‘Taiwan’s national identity’ that has been misjudged by politicians and media alike.

Hitherto analysts have persisted in the thesis of a growing sense of national identity as central to personal identities in Taiwan, marked especially by annual and many informal surveys of opinion centring on whether citizens feel more ‘Taiwanese than Chinese’. In most cases definitions for these terms are not given and true national coverage has not really been attempted. What is the evidence in these elections? How may such evidence be argued as strongly influential in a result where the China-resistant DPP has lost huge ground to the more China-positive KMT?

Referendum 13 gives us a national poll of sorts. It asked: “Do you agree that Taiwan should apply to participate in all international sporting events and the 2020 Olympic Games in Tokyo, using the name ‘Taiwan?’  The figures from the Central Election Committee now show that of 10,537,642 valid votes for referendum 13, a total of 5,774,556 valid votes were dissenting, and this vetoed the referendum proposition. This result certainly challenges any simple notion that Taiwanese political and cultural identities have shifted towards being more confidently Taiwanese, and less and less Chinese. The dissenting majority was of course marginal, but so too were most results at a regional level in all referendums, though there were spectacular variations in areas and townships around this norm.

Statistical analysis from Academia Sinica has indeed already argued that the move from vocal and active China-resistance was flagging before this.  In 2013 public opinion in Taiwan reached a peak of around 65% in citizens feeling ‘as or more’ Taiwanese than Chinese on broadly political grounds, with this declining to around 58% by 2018. The period of most sudden drop was between 2013 and 2014, especially associated with the youthful Sunflower movement and then by the great victory of the DPP in 2016.

This leads to our second query, the extent of the influence of this major ‘national identity’ issue exerts itself over Taiwanese politics more broadly. What is the evidence so far in these elections and referendums as indicated at this early stage? If we cross-reference mayoral victories with voting on referendum 13 in different regions, then we do find some association of KMT mayoral victory with dissent from the proposition of referendum 13 (e.g., New Taipei, Taichung, and Kaohsiung); and in line with this, an association of DPP mayoral victory with assent to the referendum 13 proposition (e.g., Tainan and Chiayi). There are notable outliers, such as Taoyuan where a DPP victory was associated with an overall dissenting win for referendum 13, but there may be special local factors at work in quite a few cases, given the rise of both independent and new-party candidates throughout Taiwan in recent years.

At this stage then, a very tentative conclusion might be that the identity politics trend as illustrated indirectly in referendum 13, is not as pundits have generally thought, and that there might be an accelerated decline in the proportion of Taiwanese citizens who are moving towards a demand for greater national identity and autonomy from China. Whether this is because of some natural cultural drift, because of genuine and deep feelings of essential Chinese-ness in Taiwan, especially linked with family ties and employment in China, or because Chinese so-called ‘sharp power’ activities have in recent years been very effective, is particularly difficult to decipher at this time.

Whether such international settings are relevant, and Taiwan either reflects present or indicates future global trends in democracies are moot points. As always, the principal loadstone to generalisation is the immediate China context refracted by US policy changes. The present main feature here is of course China’s trade war with the US. For internal US political reasons, Trump is obviously playing the Taiwan card – military exercises around Taiwan, the visit of high-ranking officials to Taipei, protesting against countries which have broken relations with Taiwan – to anger China. This might well be leading to China’s need to cool down Taipei’s rhetoric. China surely won’t go for any risk of actual war and it may be that the only way to check on Taiwan is through Washington DC. Beijing is very happy with the result of the election last weekend. The Taiwan Affairs Office immediately announced that they would broaden the exchange with the Taiwan counties and cities which agree with the 92 Consensus. It is worthwhile noting that the Office used the term 92 Consensus instead of One China Policy. The former one still sounds softer. China believes that their softer approach – often felt as pretty sharp within Taiwan – works. Before the election, Chairman of AIT, James F. Moriarty told the press that Taiwanese should be careful of the internet fake news manipulated by China. It is a rare move by Americans to intervene in quite that manner in Taiwan’s election. So, a scenario might emerge that Washington DC will also be playing the Beijing threat card. The result of the election has seemingly disappointed the Trump administration, and the US might well shift their focus to elsewhere and continue their competition with China.

All such conjecture does mean that the recent results may well have been caused by factors directly stemming from China, but may also have implications of direct concern to both China and the US. Of more interest here, such external forces might well render Taiwan’s electoral and referendum experience as ultimately of little relevance to what is happening elsewhere.

Ian Inkster is an FRHS,  a  Professorial Research Associate Centre of Taiwan Studies, SOAS, London; a Senior Fellow at the Taiwan Studies Programme and editor of History of Technology (London) since 2001. Mark Wenyi Lai is an Associate Professor, Department of International Affairs, Wenzao Ursuline University of Languages, Taiwan. Victoria Hsin-hsin Chang is a graduate of foreign languages in Taiwan, and of sociology and international politics in the UK. Image credit: CC by the Office of the President, Republic of China (Taiwan)/Flickr.

Some Early Thoughts on the Taiwan 2018 Elections and Referendums in an International Context- Part One
China’s emergence as a peacebuilding actor: From ‘peaceful development’ to ‘developmental peace’?