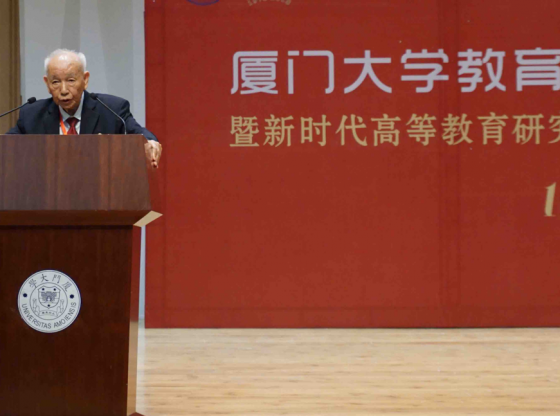 It was striking to find myself the only non-Chinese scholar at a conference celebrating the fortieth anniversary of the establishment of the Graduate School of Education at Xiamen University – the leading institution for higher education research in China – from 17 to 18 May 2018. The conference attracted around 500 higher education leaders, scholars and graduate students from all parts of China. At the centre of all the activities was Professor Pan Maoyuan, the 98-year-old scholar who established Higher Education as a discipline and field of study in the 1950s, and inspired the formation of the Graduate School in 1978, the year of China’s reform and opening up after the end of the Cultural Revolution in 1976.

Higher Education only emerged as a graduate programme in Education Schools of the Western world in the 1950s and 1960s, so this is one area where developments in China have paralleled those in the West. Professor Pan and his colleagues have nurtured a large number of doctoral graduates in higher education since the early 1980s and they can be found in leadership positions as either scholars or administrators in many universities throughout the country.

A key focus of higher education research has been on governance, with a major reform document giving universities greater autonomy and a mandate for research as well as teaching in 1985, and a higher education law passed in 1998 that gave universities the status of legal persons for the first time. Subsequent reforms involved the establishment of academic governing boards and university charters that clarify the mission and governing structure of each institution. A number of the papers presented at this conference involved research on the degree to which these reforms have been implemented and have proved effective in the governance of universities around the country.

Other themes related to China’s rapid and dramatic move to mass higher education, with enrolment growth from 3 million to around 30 million between 1999 and 2007, and most recently an age cohort participation of 48 per cent in higher education, close to Trow’s definition of 50 per cent participation for universal higher education. Issues of equity and access in terms of the rural/urban divide as well as geographical representation have also gained attention.

Another strong area of focus has been on the various international ranking systems, and the progress made by a number of top Chinese universities to higher positions within these systems. A number of papers addressed the question of what it means to be ‘world class’, and whether there were certain dimensions of China’s culture and tradition that might lead to a Chinese model of the university emerging on the global stage, as well as a School of Higher Education Research with definable Chinese characteristics.

My keynote lecture was entitled ‘Highlights in the Transformation of China’s Universities: An Eyewitness account of Critical Turning points from Isolation to Globalisation’.  I shared photos and reflections from three periods where I had observed dramatic change. The first was 1980 to 1982 when I taught for two years at Fudan University, just as China was opening up to the world and there was a tremendous sense of excitement and energy.

The second period was 1989 to 1991 when I served as First Secretary for Culture and Education in the Canadian Embassy at a time when diplomatic relations between China and most countries of the Western world were at an all-time low after the Tiananmen tragedy. It was not clear at that time whether China would return to isolation or reaffirm its open-door policy. The Canadian government’s support for enhanced cultural and educational activities even while political relations were at a standstill was greatly appreciated, as most other Western countries shut down their programmes of educational exchange.

The third period was from 1999 to 2007, when China’s universities moved to mass higher education and we had a Social Sciences and Humanities Research Council (SSHRCC) project to study this process. Our book Portraits of 21st Century Chinese Universities: In the Move to Mass Higher Education profiled the experience of 12 case study universities in different regions of China. It was published in English in 2011 and in Chinese translation in 2015.

One of the focuses of our study was the student experience in terms of equity and access, but also in terms of the growth and development of civil society and democratic participation. A second concern was to identify characteristics of Chinese universities that were rooted in China’s unique civilisation and might exert some influence on global higher education alongside China’s rising economic importance.

My presentation ended with the question raised by Kishore Mahbubani, Singapore’s ambassador to the United Nations and a former president of the UN Security Council in a lecture at Harvard’s Kennedy School a few years ago: ‘When China becomes Number One, what will it bring to the world?’  Mahbubani’s answer presents a direct challenge to Chinese universities: ‘China is not committed to promoting its political system or its socialist market economy as global models; rather, it sees its civilisation as a treasure to share with the world.’

We  see some of the leading scholars in the field wrestling with this challenge as they seek to define an emerging Chinese model, while still tending to measure excellence in terms of the dominant model of the global research university which informs the various ranking systems, including that of Shanghai Jiaotong University.

Ruth Hayhoe is a Professor at the Department of Leadership, Higher and Adult Education at the Centre for the Study of Canadian and International Higher Education, University of Toronto. This article was originally posted on the CIHE Blog and is included here with the kind permission of the author.  Image provided by the author.

Creating common ground in the teaching of Chinese
Plus ça change: Reflections 40 years after the fall of the Khmer Rouge