The long read: Accounting for and accounting in the Cambodian genocide 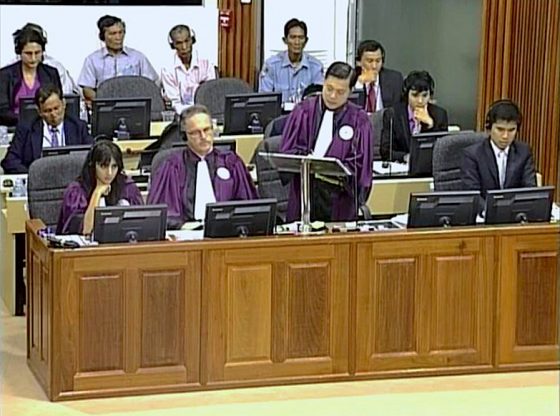 Written by James A. Tyner.

In the wake of the Khmer Rouge Tribunal (KRT), much discussion has centred on questions of justice, with an emphasis on whom to hold accountable for the mass violence that transpired during the Cambodian genocide. My concern is that, too often, attention has been deflected away from the function of accounting in the genocide; that is, the day-to-day operationalisation of mass murder and, by extension, whom we hold accountable for that.

In this brief commentary I will try to explain what I see as a fundamental paradox of the KRT. Namely, that in the long-delayed effort to document and prosecute crimes committed by the Khmer Rouge, there is a danger that we will lose sight of the broader narrative of the violence that transpired.

If a tribunal is so severely limited in its scale and scope, then the history determined by the verdicts is equally limited.

For many commentators, the KRT promised much more than it could ever deliver: a legal mechanism to obtain retributive justice whilst promoting understanding, healing and reconciliation. That the Tribunal failed to deliver to anyone’s satisfaction even a modicum of these objectives is hardly surprising. Indeed, it is doubtful whether any single tribunal could ever have reasonably achieved them.

That the pursuit of justice in Cambodia fails to match expectations is beyond doubt. After four decades, three aged men received convictions for their participation in a range of horrific crimes, including genocide and myriad crimes against humanity. By comparison, prosecutors at the Nuremberg trials convicted approximately 5,000 Nazis for their crimes following the Second World War.

And the arrest of former Nazis continues. Six days after the conviction of Nuon Chea and Khieu Samphan was announced by the KRT, German prosecutors charged a 95-year-old man with being an accessory to the deaths of tens of thousands of men, women and children at Mauthausen, a Nazi death camp that operated from mid-1944 to early 1945. Known only as ‘Hans H.’, the defendant is one of many former Nazi guards to face trial for crimes committed, decades after the act. The contrast between the prosecution of Nuon Chea and Khieu Samphan and that of Hans H. could not be more striking; and this provides the context for my brief comments.

During the short period when the Communist Party of Kampuchea (CPK), better known as the Khmer Rouge, held power in Cambodia, an estimated two million men, women and children died: approximately one quarter of the country’s pre-1975 population. Many of these deaths resulted from starvation, disease and exhaustion; many people were tortured and executed; and others were simply murdered with impunity.

Assigning accountability for these crimes has taken over 40 years, with justice delayed through a combination of domestic and international intransigence, resistance and malfeasance. Years of political manoeuvring and subterfuge seemingly came to an end when, in 2003, the Extraordinary Chambers in the Courts of Cambodia (ECCC), better known as the KRT, came into being.

In the years since then, as the Tribunal has lumbered on, the proceedings have received considerable attention and justifiable criticism. In large part, the ECCC has been widely criticised because of the restrictive jurisdictional bounds established. Following intense negotiations between the Cambodian government and the United Nations, all parties agreed to focus on a limited scope of defendants; consequently, the KRT’s personal jurisdiction severely limited the pool of people who could potentially be held accountable, with only ‘senior leaders’ and those considered ‘most responsible’ to be tried for their crimes.

By the time the ECCC was formed, most senior Khmer Rouge leaders were dead and disagreement raged over who comprised those most responsible. Several prosecutors associated with the Tribunal recommended charging upwards of 30 former high-ranking Khmer Rouge cadres; the Cambodian government opposed this, arguing that only four or five people should be held accountable.

The ECCC’s first trial, Case 001, convened on 31 July 2007 when Kaing Guek Eav (alias ‘Duch’) – the commandant of an infamous security centre known as S-21 – was formally charged with crimes against humanity and grave breaches of the Geneva Conventions of 12 August 1949. The initial hearing against Duch began on 17 February 2009 and a final verdict was delivered on 26 July 2010, finding Duch guilty of crimes against humanity, including extermination, enslavement, imprisonment, torture, rape and other inhumane acts. The court also found Duch guilty of grave breaches of the 1949 Geneva Conventions, including the wilful causing of great suffering or serious injury to body or health, wilfully depriving a prisoner of war or a civilian of fair trial rights, and the unlawful confinement of civilians. Following an appeal, the court sentenced Duch to life imprisonment for his crimes.

The following year, the Trial Chamber divided the charges in Case 002 into a series of smaller trials. The first of these, Case 002/01, commenced on 21 November 2011. For many observers, the advanced age of the defendants was of great concern. Both Nuon Chea and Ieng Sary were 85 years old, Khieu Samphan was 80, and Ieng Thirith was 79. Critics of the Tribunal noted that even if convicted, the accused were unlikely to serve a significant portion of any prison sentence handed down to them. These fears only added to a more pervasive sense that the Tribunal was, ultimately, too little too late. Indeed, prior to the commencement of the trial, in August 2011, the court declared Ieng Thirith, who was suffering from dementia, incompetent to stand trial. She would die in 2015. Ieng Sary also died prior to the completion of the trial.

On 7 August 2014, judges found both Nuon Chea and Khieu Samphan guilty of crimes against humanity and sentenced both to life imprisonment. In reaching its verdict, the Trial Chamber determined that both men were guilty of participation in a ‘joint criminal enterprise’, the purpose of which was to implement rapid socialist revolution. The Trial Chamber also concluded that certain policies formulated by the Khmer Rouge involved the commission of crimes as the means to bring the common plan to fruition, and that these included a policy to forcibly remove people from urban and into rural areas and a policy to target officials of the former Khmer Republic. Case 002/02 commenced on 17 October 2014, the presentation of evidence began on 8 January 2015, and a verdict was rendered on 16 November 2018.

Immediate reaction to this most recent verdict, both within Cambodia and throughout the international community, reflects widespread support for the trial process, in that the rulings mark the first verdict on genocide by the Tribunal. In time, however, I believe that this initial enthusiasm for the verdict will be tempered, for the actual convictions are somewhat mixed.

Broadly, the rulings find both Nuon Chea and Khieu Samphan guilty of genocide against Cambodia’s ethnic Vietnamese, although neither is found to have had ‘genocidal intent’ against the Muslim Cham community. The rulings find Nuon Chea guilty of genocide against the Cham on the principle of ‘superior responsibility’, but Khieu Samphan is cleared of these charges. Finally, the rulings find both men guilty of myriad crimes against humanity, including forced marriage, rape, persecution on religion and racial grounds, enforced disappearances, and extermination.

The KRT has declared that genocide was committed, but it is a highly circumscribed genocide. Notably, the deaths of hundreds of thousands of Khmer people, according to the rulings, were not part of the genocide and the issue of individual intent remains unclear. Beyond these specifics, the Tribunal collectively raises concerns with respect to the day-to-day operationalisation of mass murder. Crucially, people may confuse the legal decisions rendered through the Tribunal as a historiographic decision; that is, that the court has determined history. However, if a tribunal is so severely limited in its scale and scope, then the history determined by the verdicts is equally limited. This is a fundamental problem with the KRT and returns us to the prosecution of alleged Nazi guard Hans H.

Many misunderstandings surround the Khmer Rouge, and many journalists and commentators reproduce these misunderstandings to audiences equally uninformed about the complex history of the Khmer Rouge. Early accounts, for example, held that the Khmer Rouge were anti-intellectual in ideology and thus shunned documentation. The Khmer Rouge, supposedly, constituted a disorganised, highly irrational body politic hell-bent on returning Cambodia to a primitive past modelled after the former Angkorian Empire. However, as revealed by the Herculean efforts of the Documentation Center of Cambodia (DC-Cam), the Khmer Rouge were anything but opposed to administrative practices in their efforts to push forward a modern society with a radically innovative form of governance.

My concern with the Tribunal, which is not the same as a truth commission, has less to do with the legal implications than with the broader narratives and counter-narratives offered. What is required is an accurate account of the day-to-day operations that made violence possible. The judgements against Duch, Nuon Chea and Khieu Samphan take us only so far.

Throughout Nazi-occupied Europe, myriad bureaucrats and other lower-level functionaries made mass murder possible. As many commentators have documented, someone kept the trains running on time to Auschwitz, Treblinka, Sobibor and Mauthausen. Someone ordered in the Zyklon-B gas used to exterminate millions; someone catalogued and stocked the gas; and someone administered the gas. Others stood guard, witness to the process of herding men, women and children into the gas chambers and their subsequent incineration in the ovens.

What of Cambodia? Who requisitioned rice as people were starving? Who ordered – and who carried out – the mass purges of people deemed untrustworthy or traitorous? Who arranged for the transport and relocation of forced labourers following the purges? Who catalogued and interrogated the tens of thousands of men, women and children arrested and detained in upwards of 200 security centres throughout Cambodia? Who stood guard and who carried out the executions?

Put simply, an elaborate bureaucracy made possible the commission of genocide and crimes against humanity in Cambodia. Starvation, disease, torture and execution were the result of bureaucratic procedures: a complex interplay of a highly centralised system of governance that administered food requisitions, organised a system of forced labour, oversaw the inadequate distribution or withholding of medical supplies, and enacted myriad surveillance practices that led to mass incarceration and execution. The conviction of Nuon Chea and Khieu Samphan is a painful reminder that all the bureaucrats and functionaries who made genocide and the commission of crimes against humanity possible will escape justice.

James A. Tyner is a Professor of Geography at Kent State University and a Fellow of the American Association of Geographers. His research interests include the political economy of genocide and mass violence in Cambodia. Professor Tyner’s most recent book is The Politics of Lists: Bureaucracy and Genocide under the Khmer Rouge (West Virginia University Press, 2018). Image Credit: CC Wikimedia Commons.

Plus ça change: Reflections 40 years after the fall of the Khmer Rouge
Winning and losing under Hun Sen’s win-win policy