Emotion and ambiguity in the Tuol Sleng Genocide Museum 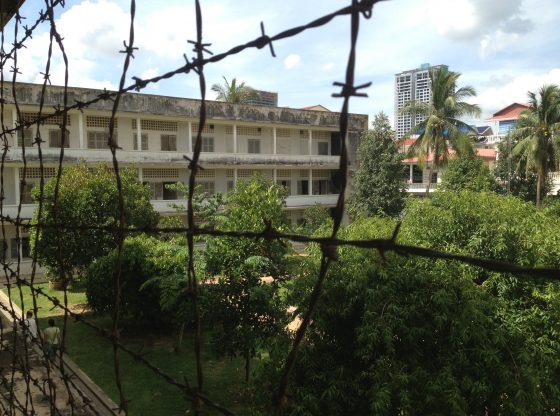 Phnom Penh is home to one of the world’s most emotionally powerful museums, the Tuol Sleng Genocide Museum. Yet the museum offers an ambiguous and incomplete political narrative of the horrors of the Khmer Rouge years.

While many contemporary visitors to S-21 understand it to be an anti-Communist site, it was in fact established by the Vietnamese Communist Party.

After years of brutal civil war in Cambodia and devastating bombings by the Americans, the Khmer Rouge seized the capital city on 17 April 1975 and immediately turned an urban high school into an infamous prison. Run by Santebal, the party’s security police, and known as S-21, the site was shrouded in secrecy. Classrooms became torture chambers or were divided into scores of tiny cells where shackled prisoners awaited their fate. Elsewhere, the small S-21 staff compiled thousands of dossiers on each prisoner, including mug shots, autobiographical confessions, and interrogation notes.

Party veteran Comrade Duch oversaw the imprisonment, torture and interrogation of 14,000 men, women and children who were then murdered. Only seven inmates survived. Initially, there were executions at Tuol Sleng, but after a year the condemned were taken to neighbouring villages where they were beaten to death and thrown into the shallow graves today known as the ‘killing fields’.

Pol Pot’s murderous regime collapsed following the invasion of Cambodia by Vietnam in December 1978. By January, the Khmer Rouge had abandoned Phnom Penh and the invaders entered the capital on 7 January 1979. The following day, two Vietnamese photo-journalists were stunned to discover the urban torture centre. Further horrors awaited the troops who later found the suburban execution grounds. Both sites showed evidence of recent violence, including fresh blood on the floors of the former school buildings and a stench that lingered for months.

While legitimately dismayed by the carnage of this revolution gone wrong, the Vietnamese occupiers and their Cambodian allies were quick to politicise and publicise their enemies’ crimes against humanity. The context of the international community’s condemnation of Vietnam’s invasion of its neighbour, in addition to the introduction of punitive American sanctions against war-torn Vietnam, made this policy all the more important. Led by pro-Vietnamese former members of the Khmer Rouge, the People’s Republic of Kampuchea (1979–1989) set up Tuol Sleng as a museum to both document the regime’s horrific violence and to justify the invasion by Vietnam.

While many contemporary visitors to S-21 understand it to be an anti-Communist site, it was in fact established by the Vietnamese Communist Party. Colonel Mai Lam, who had previously worked on Ho Chi Minh City’s Exhibition House for US and Puppet Regime Crimes (now the War Remnants Museum), oversaw the project. Working with East German advisors and visiting Holocaust museums and memorials in France, the USSR and Soviet Bloc countries, Mai Lam gave the museum a specific style. As loyal party members, the museum organisers did not want to tarnish the image of Marxism. Gerhard Scheumann, a propaganda film-maker from the German Democratic Republic, was saddened that the violence was ‘carried out under the hammer and sickle’ and held that the Khmer Rouge had ‘dragged the Communist Party into the dirt’, as recounted by Peter Maguire in his book Facing Death in Cambodia.

The result was a series of aesthetic choices that linked S-21 to Nazi concentration camps. For example, the Marxist or socialist realist iconography, so typical of revolutionary regimes, is absent. Nor are there political slogans printed on banners. Rather, the museum contains a series of bare rooms with shackles on the floor and a framed photograph of how the room was found on 8 January 1979. The stark concrete is reminiscent of Auschwitz, the ultimate site of fascist violence.

The few displays, such as piles of victims’ clothing and a map of Cambodia made of human skulls and bones, with rivers painted blood red, similarly resonate with images of the Nazi death camps. While the map has since been taken down, a large photograph of it adorns the wall of one room and several display cases contain fractured skulls. Even the decision to include the contested term ‘genocide’ in the museum’s name is a political act designed to invoke fascist rather than Marxist acts of mass violence. The museum took about a year to establish and as early as March 1979 the new Democratic Republic of Kampuchea organised tours for foreigners. Tens of thousands of Cambodians flocked to the prison in the first few weeks, and hundreds of thousands by year’s end. During the subsequent civil war, occupation by the United Nations, and the re-establishment of an effective and independent government, the site became an internationally recognised symbol of the unfathomable violence of revolutionary excess.

For years, Tuol Sleng had relatively little in the way of documentation or displays. The museum is perhaps most famous for its collection of photographs. Using colonial-era French police techniques and equipment, the Khmer Rouge took thousands of mug shots of prisoners, often moments before certain torture and death. These photographs were part of the party’s surprisingly elaborate system of intelligence files found by the Vietnamese. Several rooms at Tuol Sleng are filled with hundreds of these haunting images. In contrast to its spartan beginnings, today’s museum is much more robust. Perhaps the greatest innovation is the audio tour. Since 2015 visitors can hire a set of headphones with dozens of two- to six-minute audio clips that guide one through the site. A series of posters presents a very brief history of the Khmer Rouge era, while a collection of paintings by Vann Nath, one of the seven survivors, depicts the various torture and execution practices. A gift shop offers a variety of books, T-shirts and souvenirs as well as cold beverages.

On the upper floors of three of the four buildings there are newer and more nuanced presentations. Visitors have the opportunity to meet S-21 survivors Bou Meng and Chhum Mey, both of whom sit at tables with books for sale and will pose for photographs with visitors. There is now an air-conditioned room where twice a day two short videos are screened and Norng Chan Phal, a child survivor of S-21, tells his story. However, when I spoke with him in March 2018, he told me he needed to write a book in order to make ‘real money’. While undeniably powerful, the museum can sow confusion. Ambiguous and contradictory informational panels blame the undefined ‘Pol Pot clique’ without properly contextualising the revolutionary violence. Most significantly, the museum presents the 14,000 inmates as innocent victims, without explaining that the vast majority of those sent to S-21 were high-value prisoners, including high-ranking and veteran members of the Khmer Rouge whom the leadership suspected of disloyalty.

In the mugshot displays there are also numerous images of women, with some photographs reappearing in several rooms, giving the impression that as many women went through S-21 as men, when in reality less than 8 per cent of S-21’s inmates were female. The over-representation of women and children solicits a greater emotional response, however, and allows the museum to gloss over some of the more troubling questions. In this way, the Tuol Sleng Genocide Museum resonates with the frustratingly insufficient trial of four elderly leaders of the Khmer Rouge conducted by the Extraordinary Chambers in the Courts of Cambodia (ECCC).

Michael G. Vann is a Professor of History at Sacramento State University, specialising in imperialism, the Cold War, and genocide in Southeast Asia. He is the author of The Great Hanoi Rat Hunt: Empire, Disease, and Modernity in French Colonial Vietnam (Oxford UP, 2018). Professor Vann is currently a Fulbright Senior Scholar in Cambodia where he is writing a comparative study of Phnom Penh’s Tuol Sleng Genocide Museum, Ho Chi Minh City’s War Remnants Museum, and Jakarta’s Museum of the Treachery of the Indonesian Community Party. Image Credits: Michael G. Vann.