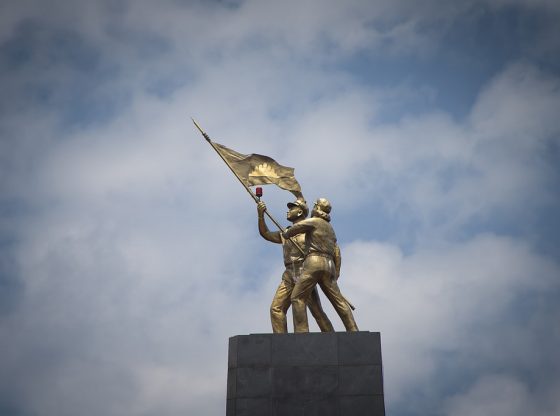 On 29 December 2018, the Cambodian government officially inaugurated a new monument and museum dedicated to the win-win policy of Prime Minister Hun Sen, who in the mid- to late-1990s provided former members of the Khmer Rouge (KR) with state resources, government positions, access to natural resources and partial protection from potential prosecution for their crimes during the Democratic Kampuchea (DK) regime between 1975 and 1979.

The government – and Hun Sen in particular – marked the anniversary of the downfall of the KR by taking credit for the ‘successful’ reintegration of KR forces into Cambodian society. The government also praised itself for bringing lasting peace and stability to Cambodia, ending a decade-long conflict after the international community had failed to do so during the United Nations Transitional Authority to Cambodia (UNTAC) period from 1992 to 1993. During the UNTAC period, the KR withdrew in order to resume fighting.

Hun Sen was clearly not the only person who used ‘win-win’ promises to lure the KR to his side. But he now positions himself as the sole mastermind behind the win-win policy and the guarantor of peace and stability.

The politics of memorialisation, which in this case includes a monument with a museum and the publication of two books in praise of Hun Sen’s win-win policy by high-ranking generals, usually involves the exclusion of former adversaries and competitors. In this instance,  Norodom Ranariddh, son of the former king, who initially won the elections during the UNTAC peace mission in 1993.

Although Ranariddh and his party, the Front uni national pour un Cambodge indépendant, neutre, pacifique et coopératif (FUNCINPEC; in English: the National United Front for an Independent, Neutral, Peaceful and Cooperative Cambodia), won the elections in 1993, neither the former ruling party nor the military or its administrative apparatus were willing to cede control to the son of King Norodom Sihanouk. Ranariddh was therefore forced into a co-premiership with Hun Sen, leader of the losing party, the Cambodian People’s Party (CPP), in large part because of the short-term secession of several provinces that had pledged allegiance to the CPP.

Initially, Hun Sen seemed to prefer taking a hard line against the Khmer Rouge, while Ranariddh – and especially his father, the re-installed King Sihanouk – had begun talks with certain wings of the KR. Although those talks broke down after the start of the co-premiership, Sihanouk continued to call for unification under his own political leadership. His son Ranariddh, however, eventually stood against his father and agreed with Hun Sen to outlaw the KR and weaken it by military means. For a short period after being outlawed, former KR members were offered a pardon if they confessed that they had been misled by the Communists. The KR lost many of its forces during this period, but desertions were largely limited to the lower and middle ranks.

That all changed in 1995, when Keo Pong in the Aoral district became the first higher-ranking commander to defect to Hun Sen. After this first defection from the upper ranks, Hun Sen tried to integrate other KR officers into his (para)military. However, so too did Ranariddh, who tried to bring top Khmer Rouge commanders into his own fold – a fact that tends to be left out of Hun Sen’s win-win narrative and forgotten by many observers.

Both leaders were able to mobilise old connections. While Hun Sen had been a mid-ranking Khmer Rouge commander, Ranariddh had a more complicated history: the Khmer Rouge had killed many of his family members, but it shared his anti-Vietnamese sentiments and had also fought with him against Hun Sen’s central government for a decade.

In 1996, both sides sent negotiators to the KR stronghold of Pailin, where the former DK foreign minister and ‘brother number 3’ Ieng Sary declared his willingness to make a deal. In the end, as one KR commander pointed out at the time, Hun Sen simply had more to offer ‘because the development promises made in August [by Hun Sen] were good. FUNCINPEC cannot provide schools, etc., because its party is poor, and FUNCINPEC will lose the elections [scheduled for 1998], so it’s better to be with CPP. CPP will give us power, not FUNCINPEC’.

The upcoming elections in 1998 put additional pressure on Ranariddh. In order to counter Hun Sen’s success, Ranariddh sent negotiators to the last remaining KR stronghold of Anlong Veng, where Ranariddh eventually made a deal with Khieu Samphan and others to join him for the elections and to send Ta Mok, Son Sen and Pol Pot into exile. The deal not only angered Pol Pot (who killed Son Sen in retaliation before being arrested by Ta Mok and put on trial), but also led Hun Sen to move against the new coalition, which looked like a revitalisation of the old insurgent movement.

In March 1997, a hand grenade exploded during a rally of the Sam Rainsy Party (also part of the new coalition), and following the announcement of the deal with the Anlong Veng faction in June, Hun Sen accused FUNCINPEC of secretly mobilising KR units and buying weapons illegally. On 5 and 6 July Hun Sen commanded his troops in the capital to attack FUNCINPEC bases and to go after FUNCINPEC politicians and loyalists, resulting in several dozen deaths.

While some units of FUNCINPEC retreated to the Thai-Cambodian border in an attempt to revive the insurgency and unite with the remaining KR under Ta Mok, it was clear that this revival stood no chance without foreign support. After the 1998 election – widely believed to be fraudulent – the remaining KR and FUNCINPEC forces were made to surrender. Pol Pot died in April 1998, the last KR surrendered (rather than defecting) on 26 December 1998, and Ta Mok was captured on 6 March 1999.

Hun Sen was clearly not the only person who used ‘win-win’ promises to lure the KR to his side. But he now positions himself as the sole mastermind behind the win-win policy and the guarantor of peace and stability. Ranariddh and FUNCINPEC experienced a steady decline over the course of the two decades since 1998, leading to their being almost entirely excluded from the official space of memorialisation. And ultimately, not every KR profited to the same degree from the policy. Different members of the KR received greater or fewer resources, political positions and legal protection depending on the circumstances (deal or surrender) and timing of their desertion.

Daniel Bultmann is an Assistant Professor at the Institute of Asian and African Studies, Humboldt University of Berlin, and a Research Fellow in the Department of Social Sciences, University of Siegen. His research focuses on the sociology of armed groups and the military, peace and conflict studies, and post-conflict transformations, as well as Southeast Asian politics and societies, in particular Cambodia. Among his most recent publications is The Social Order of Postconflict Transformation in Cambodia: Insurgent Pathways to Peace (Lexington Books, 2018). This work highlights the importance of the social background of soldiers and commanders and also the differences in the network structures of rebel groups, which result in different ‘pathways to peace’ during post-conflict transitions. Image Credit: CC PhotAsia/Flickr.

The long read: Accounting for and accounting in the Cambodian genocide
Emotion and ambiguity in the Tuol Sleng Genocide Museum