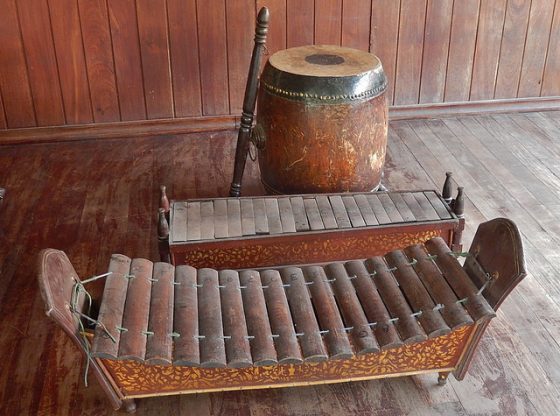 At the moment of their victory, the Khmer Rouge enjoyed little public support. Accordingly, their ‘Four-Year Plan’ outlined two primary goals: to ‘abolish, uproot and disperse’ all remnants of the previous regimes, and ‘to strengthen and expand the building of a revolutionary culture’, in particular, ‘the strengthening and expanding of songs and poems that reflect good models … in the period of socialist revolution and the building of socialism’. In keeping with the first objective, some 90 per cent of traditional musicians and dancers, particularly those associated with the court of King Norodom Sihanouk (1953–1970), were put to death. Those who remained were assigned to the second objective.

‘It was the ugliest music I had ever heard. … Cymbals and gongs banged away. I asked myself, “Is this music?” ’

What is interesting about socialist music, whether from the USSR, Democratic Kampuchea or, more recently, North Korea, is the tensions that it embraces. While the lyrics are aspirational, the beatific vision of society that they describe is profoundly at odds with the suffering of the country’s citizens. Furthermore, while the lyrics communicate new revolutionary ideas, the music itself is generally simple and conventional. The corpus of Khmer Rouge songs, preserved in a digital archive maintained by the Documentation Center of Cambodia (DC-Cam), exhibits these tensions and represents an interesting case study of an – albeit unsuccessful – attempt to create social identity through music.

The first tension, between aspiration and reality, has been amply discussed elsewhere (see for example Kiernan, Marston and Ngor). The second tension, however, between progressive lyrics and conservative musical forms, remains largely unexplored. Many Cambodians seem to have regarded the new songs as strikingly different from their traditional music. However, out of necessity, Khmer Rouge songs share several broad musical characteristics with the older style. It would have been counterproductive to seek broad appeal with an alien musical style, and furthermore, the few remaining traditional musicians who performed the songs simply adapted the techniques with which they were familiar. Thus, Khmer Rouge songs feature conventional ensembles of traditional instruments, simple structures, heterophonic texture, improvised ornamentation, and pentatonic pitch organisation.

Aesthetically, Cambodians’ responses to the new songs varied. That of Haing Ngor was particularly visceral: ‘It was the ugliest music I had ever heard. … Cymbals and gongs banged away. I asked myself, “Is this music?” ’

The archive contains a variety of song styles, and some, like US Imperialist is the Leader of Thieves have the ‘cymbal-and-gong flourishes finishing out the phrases’ that Ngor describes. The melody of this song also exhibits a limited pitch palette and frequent repetition, which may characterise what he found to be ‘stylised and Chinese’. US Imperialist is the Leader of Thieves. Transcribed by the author.

Interestingly, Sophiline Cheam Shapiro, who was younger than Ngor at the time, remembers ‘pretty songs, with beautiful melodies and poetic lyrics’.

The archive also includes several songs such as Harvest the Rice that feature goal-directed melodies in balanced phrases, unpunctuated by ‘cymbals and gongs’. These songs seem to retain more characteristics from traditional music, and may have been more aligned with Shapiro’s aesthetic expectations.

Harvest the Rice. Transcribed by the author.

As with most of the songs in the archive, Harvest the Rice was clearly recorded from the radio and begins with a brief spoken introduction. The accompanying instruments seem to have been drawn from the traditional mohori ensemble, including the krapeu (zither), khĕum (a hammered dulcimer), tro (spike fiddle), chhing (finger cymbals), and thaun-rumanea (a pair of drums).

The song begins with a short instrumental introduction derived from the second phrase of the strophe. The strophes then follow, arranged into cycles of three featuring a female vocalist followed by a male vocalist and then a duet. The vocalists embellish the melody freely with each strophe, both for variety and also to accommodate the changing lyrics. After the second cycle, the ensemble performs the strophe instrumentally. This is followed by a strophe featuring the female vocalist that breaks off abruptly (perhaps the beginning of a third cycle).

The texture is heterophonic: all the instrumentalists play essentially the same melody, adding liberal ornamentation idiomatic to their specific instruments. The pitch organisation is almost purely pentatonic. The melody describes a graceful arc, featuring an introductory rise from G to C, followed by a tension-building ascent to G at the end of the first phrase. This is balanced in the second phrase by an introductory rise to G followed by a tension-releasing descent back to C. The passing tone D in the final cadences of the introduction and the strophe is the only pitch outside the collection, and it serves to strengthen the resolution to C.

In spite of these similarities, Harvest the Rice is not traditional: its folk-song simplicity and single instrumental interlude clash significantly with standard expectations of music from the mohori ensemble. In order to appreciate the nuances of this ‘revisionist’ style, and particularly its effectiveness, more work remains to be done in analysing and cataloguing the corpus of Khmer Rouge songs.

Sociomusicologist Simon Frith has argued that social groups can only form their identities through the shared experience of cultural activity. Under the Khmer Rouge, this ‘cultural activity’ consisted mainly of privation, forced labour and terror, but the new songs certainly played a significant role in shaping revolutionary culture.

Ben Kiernan reports that citizens frequently mocked the songs, singing them with parodied lyrics as a protest. However, even Ngor, who despised the songs, later admitted that when he ‘listened to that marching music, with its strong and vigorous beat … I found myself believing, for at least a few moments at a time, that the Khmer Rouge had done it. They had succeeded in remaking the country to their bold plan’.

Shapiro also felt she was formed by these songs, explaining that ‘they reflect an experience unique to my generation of Cambodians … The Khmer Rouge hoped to obliterate our history, and in doing so, their songs have forged a significant place in it. It is for this reason that I will never forget the songs my enemies taught me’.

J.W. Turner is an Assistant Professor of Music at High Point University. He has a background in cello performance and music theory and currently teaches music in liberal studies. Turner’s research has been published in the Virginia Review of Asian Studies, Education About Asia, The Indiana Theory Review, and Music Theory Online. Image Credit: CC Michael Coghlan/Flickr.

Emotion and ambiguity in the Tuol Sleng Genocide Museum
The Royal Ballet of Cambodia: From ritual to a national identity