A new history for old crimes: Sexual violence during the Khmer Rouge regime 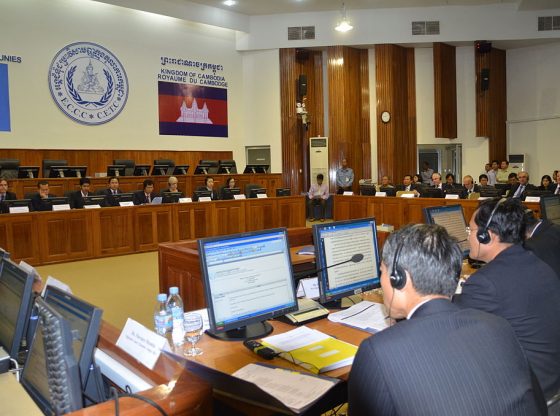 Forty years after the fall of the notorious Khmer Rouge regime, which controlled Cambodia between 1975 and 1979, a sliver of justice has finally been served.

On 16 November 2018, the Khmer Rouge Tribunal (officially known as the Extraordinary Chambers in the Courts of Cambodia, or ECCC) reached its most far-reaching verdict yet, sentencing to life in prison the two most senior surviving Khmer Rouge leaders, Nuon Chea and Khieu Samphan.

The Trial Chamber’s recent verdict inextricably links gender and genocide in the case of the Vietnamese victims.

During their tenure, the Khmer Rouge’s leaders were responsible for the deaths of around two million people – a quarter of the country’s total population – through starvation, slave labour, inhumane living conditions, arbitrary detention, execution and torture. No family was spared the consequences of their rule.

Only a summary verdict was read aloud in November 2018 (the full version, some 2,000 pages long, has been delayed to allow for translation and is expected to be released in late January 2019). The recitation by the President of the Trial Chamber, Judge Non Nil, took two-and-a-half hours in front of a courthouse packed with students, monks, diplomats, academics, media representatives, government officials, survivors and their families.

The large crowd reinforced the historical significance of the verdict. Although the Tribunal has been underway since 2006, costing US$300 million to date, this is its first conviction for genocide (carried out against the Cham and the Vietnamese ethnic minorities). Indeed it’s no wonder the verdict has been hailed as ‘Cambodia’s Nuremberg Moment’, for on its opening day this particular case (Case 002/02) was referred to as ‘the most important trial in the world’. Along with a host of other crimes, including war crimes and crimes against humanity, this conviction finally and legally establishes the Khmer Rouge leadership as one of genocidaires.

Many followed the lead of renowned Southeast Asian scholar Michael Vickery, arguing that women were never safer from sexual abuse than during the Khmer Rouge years in light of that group’s prudish ideology. In its early stages, the ECCC also adopted this thesis and proved reluctant to include crimes of sexual violence into its prosecutorial strategy. Only in recent years has there been a corrective turn in the prosecutorial approach.

That turn proved fruitful, as the Trial Chamber’s recent verdict inextricably links gender and genocide in the case of the Vietnamese victims. The Chamber found that families were targeted for killing based on matrilineal descent in order to destroy the bloodline. In light of the verdict, one researcher has already characterised the violence against the Vietnamese people in Cambodia as an example of ‘genocide gendered’. (Other documented testimony by researchers, suggesting that Cham Muslim women may have been at higher risk of rape due to their ethnic and religious identities, was not included in the summary judgement.)

Widely experienced during the mass atrocity was the crime of forced marriage, which was almost excluded entirely from the proceedings of the court. Indeed, it was only as a consequence of the advocacy of civil parties (victims who become parties to the proceedings) and their lawyers, that this crime was included as one of the five principle policies used by the regime to support its criminal enterprise.

Under the Khmer Rouge, mass forced marriages were widespread throughout the country. Group weddings of up to 100 couples were held, often between complete strangers, bereft of traditional rituals and against ancient cultural norms that require parental and ancestral involvement. Following the formal procedure, couples were escorted to prepared houses, where they were expected to consummate the marriage under the surveillance of Khmer Rouge spies. To resist any of the steps of the union could lead to punishment, death and, for some, rape by cadres or assigned spouses. Many marriages led to pregnancies and children, and overall forced marriage resulted in a multiplicity of gendered responses and consequences.

Reading out its decision in relation to this crime, the Trial Chamber stressed its reproductive aims, and the gendered sexual violation of both women and men:

The Chamber finds that there existed a nationwide policy to regulate family-building and marriage, which was implemented by Party cadres at all administrative and military levels. The CPK [Communist Party of Kampuchea] designed this policy, replacing the role of parents in the selection of a suitable spouse, forcing couples to marry and forcing the production of children, for the purpose of increasing the country’s population within 10 to 15 years… Both men and women felt forced to have sexual intercourse with their new spouse, and thus did so against their will.

As only a summary verdict has so far been released, we will need to wait for the full version to understand how and why the Chamber came to its conclusions regarding the role of gender-based and sexual violence as part of the general atrocity and genocide. However, the case is already under appeal and with both accused being so elderly and fragile, there is concern that they will not survive the process, thus avoiding the verdict and the consequences of four years of deliberations.

When it comes to gender-based violent crimes, the ECCC has much unfinished business. Indeed, it is only in the last planned trial, the so-called Case 004, where the issue of rape outside of forced marriage is being investigated. However, it is extremely doubtful that this or any of the other scheduled trials of the ECCC will go forward due to donor fatigue and government impatience.

For victims of gender-based sexual violence during the Khmer Rouge period then, there may only be a sliver of justice, and that justice may ultimately lie outside the courtroom –especially in terms of changing social attitudes around the gravity of sexual violation in conflict scenarios and beyond.

In the meantime, the Cambodian women and men who bravely came forward to share their experiences of forced marriages and the rapes within those marriages have greatly expanded our understanding of mass atrocity and ‘genocide beyond killing’, as well as the critical role played by everyday gendered experiences. That contribution has radically changed the established history of the Khmer Rouge regime, forty years after its fall from power.

Theresa de Langis is an Associate Professor in Global Affairs and the Director of the Center for Southeast Asian Studies at the American University of Phnom Penh. Her research focuses on sexual violence in conflict settings, with a particular focus on sexual violence during the genocidal Khmer Rouge regime in Cambodia. Image Credit: CC Wikimedia Commons.