Human trafficking and the use of social media: Keeping up with the criminals 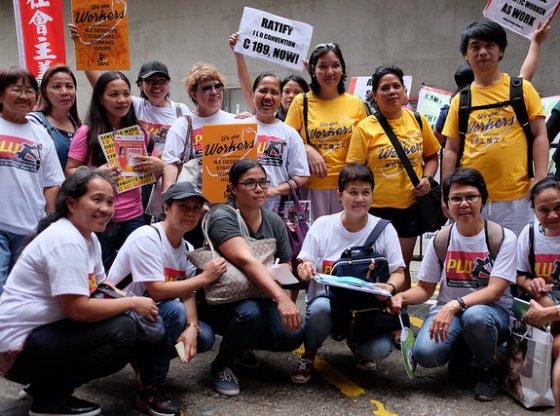 Photographs of Erwiana Sulistyaningsih, an abused Indonesian domestic worker who was undernourished, badly bruised and hardly able to walk, were taken by another domestic worker inside the Hong Kong International Airport while both were waiting for flights home to Indonesia. Sulistyaningsih was wearing an adult diaper, several layers of clothing and heavy make-up to disguise her battered body.

We still know too little about the way network technologies affect the modus operandi of traffickers, or how we can minimise the risks associated with these technologies.

Photographs of her injuries went viral on social media platforms and galvanised a campaign to combat human trafficking and improve the working conditions of domestic migrant workers in Hong Kong. Facebook pages like ‘Justice for Erwiana and all Migrant Domestic Workers’ and ‘Justice to Erwiana! No to Modern Slavery! End Social Exclusion of Migrant Workers in Hong Kong’ sprang up and rallied workers and the public to protest against the mistreatment of domestic workers. Her case was also reported in the Straits Times in Singapore, The South China Morning Post, The Guardian and on CNN. In 2015, Sulistyaningsih’s abusive employer was sentenced to a six-year jail term.

Sulistyaningsih’s case shows that few things in modern life escape the digital lens. Network technologies like mobile phones, social media platforms and the internet have not only changed how information travels and the way people communicate, but they also offer an immense store of resources for combatting crimes like human trafficking.

A 2018 Global Digital report states that Southeast Asia has 380 million internet users, of which 95 per cent were active social media users at the start of 2018. The region has 920 million mobile subscriptions; that is, 141 per cent as a share of the population in the region. 531 million or 81 per cent of Southeast Asians are connected to mobile broadband.

That the region’s internet and social media penetration rates stand at only 58 per cent and 55 per cent, respectively, indicates that there is much room for virtual connectivity to grow. Therefore, understanding how network technologies and their complex web of virtual connections can facilitate human trafficking and how they can in turn be incorporated into strategies to fight against trafficking is both logical and necessary. Nonetheless, we still know too little about the way network technologies affect the modus operandi of traffickers, or how we can minimise the risks associated with these technologies.

One reason for this knowledge gap is that the approach to anti-trafficking laws and enforcement in Southeast Asia still frames trafficking as a traditional security issue that focuses on the state and its borders as the main objects for protection. The ASEAN Convention against Trafficking in Persons Especially Women and Children (ACTIP), for instance, privileges border controls as a remedy to human trafficking. State obligations prescribed within the ACTIP stress the importance of immigration law enforcement, travel documents and the criminalisation of irregular migration. As such, tools such as fingerprint scans, biometric passports and complex visa regimes designed to secure state borders are more likely to be deployed as a way to address trafficking.

Given the number of actors involved, the different levels of operation – both vertically and laterally – and the fact that movements transcend national borders, this means that law enforcement remains a few steps behind the criminal networks that move people forcefully or illegally across borders, because the threat is still conceived of conservatively. Non-traditional security challenges like human trafficking require equally innovative measures to counter them, because of their defining characteristics, as outlined above.

Indeed, the fact that Sulistyaningsih was wheeled through the immigration gates at the airports in Hong Kong and Indonesia with a baggage trolley, her injuries either unnoticed or ignored, points to the impotence of border control regimes as the dominant anti-trafficking approach. Much of the trafficking in Southeast Asia happens in the shadow of the law and under the noses of law enforcers. Traffickers who are familiar with local systems, power networks, social structures and the use of technology are able to mask trafficking with the appearance of routine transactions in an imperfect market and navigate state borders.

Such realities on the ground can only be ascertained by starting important conversations at the grassroots level. This is something that those responsible for law enforcement may have overlooked, given their preoccupation with the operational aspects of fighting human trafficking. Yet another stratagem is for law enforcement to harness technology to its fullest and take the ‘fight’ into cyberspace, meeting criminal rings where they operate best.

Stepping up the action

Non-governmental organisations (NGOs) and the private sector have begun to leverage the potential of network technologies to understand trafficking trends better and design anti-trafficking solutions. An array of mobile phone applications have emerged to educate users about human trafficking and its prevention, to help trace the supply chains of consumer products and their links to forced labour, and to identify and report incidents of human trafficking. All of these apps are available free of charge at the tap of a finger on a smartphone. Online databases are also being built and hosted on clouds so that different organisations have a platform for knowledge sharing and case management and can build collaborative networks. These efforts help to close the knowledge gap, but they are not likely to combat successfully the kind of challenges which network technologies present to law enforcement teams, legal networks or victim protection systems.

Effective anti-trafficking policies should not be universally focused but instead need to address the unique circumstances of each country. This includes reassessing current legislative mechanisms to consider how best to investigate trafficking crimes facilitated by technology and committed online, in addition to gathering evidence and protecting potential victims from the risks of trafficking.

We are now looking at a new ‘space’ of governance and our potential entry into it. But this move must be carefully measured to prevent abuse or over-regulation. A starting point for crafting these policies is, simply, to know more about the links between network technologies and trafficking. This is where current research needs to be focussed. And, as with any non-traditional security challenge, collaboration between governments, civil society, the private sector and academia is vital.

Yen Ne Foo is a writer and researcher based in Kuala Lumpur, Malaysia. Her research focusses on migration and human trafficking in Southeast Asia. Her areas of expertise include humanitarian aid and disaster relief, collaborative governance, and the international politics of communication and migration. Tamara Nair is a Research Fellow at a Think Tank in Singapore. Her research interests include migration and human trafficking and the women peace and security agenda and development, all in the Asia-Pacific region. Image Credit: CC IDWF/Flickr.

Pampering London with Pinoy care
A fraught and frightening future? Southeast Asia under the shadow of Trump’s America and Xi’s China