Chinese and American dreaming: The Road or The Wall?

Home /Asian Century, Belt and Road Initiative, China/Chinese and American dreaming: The Road or The Wall? 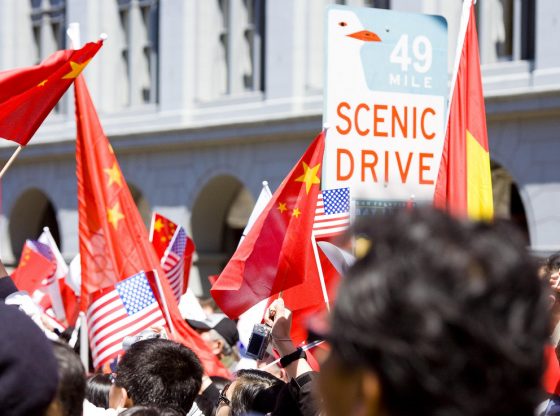 Written by Michael A. Peters.

Richard Rorty, the American pragmatist, suggested that Walt Whitman and John Dewey provided a narrative re-crafting of the American Dream by shaping the secular dream of America based on the notion of exceptionalism without reference to the divine – a society where all Americans would become mobilised as political agents in the cause of democracy.

Rorty’s success as a philosopher is related to his ability to tell a new story about America and the American Dream, to re-describe the past using a different vocabulary, and to highlight how a new philosophical history can make us feel differently about who we are and who we might become. Rorty offers us a ‘philosophy of hope’, a philosophy based on the narrative of cultural invention, self-discovery and national self-creation.

Obama consistently made reference to the American Dream – both during his campaigning for the Presidency and after – often focusing on his own remarkable story as being emblematic of the possible. He also carefully used the intellectual resources of the American Dream to unify Americans and to provide the vision for the society he wants others to dream of. The question for Obama was, in a time of decline, how serviceable is this dream? Can it be restored and is it possible for its core ideals to be refashioned?

James Truslow Adams was the historian who first coined the term the ‘American Dream’ in The Epic of America, which was published in 1931 – significantly, at a time when America was suffering the early years of the Great Depression. He chose his title well. The term ‘epic’ refers to a long, narrative poem detailing the heroic deeds and events significant to a culture, tribe or nation. To describe America as an epic is to make an appeal to noble sentiments, and Adams was aware of this. Specifically, in the context of the 1930s, he wanted to highlight and romanticise the ethic of equality – in particular, equality of opportunity and equality before the law.

By comparison, Donald Trump bases his version of the American Dream on the slogan ‘Make America Great Again!’ that draws on and furnishes the rise of national authoritarian populism and alt-right sentiments. ‘Make America Great Again’ (MAGA) was Trump’s 2016 campaign slogan – a phrase used also by Ronald Reagan in his 1980 campaign. MAGA is dominant in Trump’s thinking as he tries to undo all of Obama’s policies: in health care, taxation, trade and foreign policy, and capped recently by a stubborn defence of his withdrawal from the Paris climate accord at the 2016 G20 meeting.

MAGA is a different narrative of the American Dream from liberal internationalism, one that is based on a mixed or blended discourse derived from ‘America First’: withdrawal from international agreements in trade and climate change, a resentful attitude to traditional allies, and a strong alignment with far-right ideas – both within the closed circle of Trump’s advisers and in allegiances to deindustrialised voting constituencies in the Rust Belt, which suffered from economic globalisation when jobs moved to the Far East.

Trump’s narrative of the American Dream is directed against all outsiders – Mexicans, undocumented folk, the black community, women, Muslims – and functions by casting aspersions and tapping into existing prejudices and disaffection. Trump stated in his inaugural address: ‘Rusted out factories are scattered like tombstones across the landscape of our nation. The wealth of our middle class has been ripped from our homes and redistributed all across the world’. But if the narrative is essentially directed inward, it also signifies ‘America closed’ as against ‘America open’ – an attitude which is refracted in the hasty recoil from global moral leadership and from being ‘leader of the free world’.

In China, meanwhile, Xi Jinping Thought on Socialism with Chinese Characteristics for a New Era (2017) was added to the Communist Party of China’s (CPC) Constitution during its 19th Congress, and it sets the tone and direction not just for the next five years but – importantly – for the fifteen-year period following the establishment of ‘Xiaokang’.

Originally a Confucian term, Xiaokang – which means ‘moderately prosperous society’ – was first used by Hu Jintao (General Secretary of the CPC from 2002 to 2012) to refer to economic policies designed to create a more equal distribution of wealth within China. The Belt and Road Initiative is an ambitious infrastructural development plan aimed at boosting trade, stimulating economic growth and connecting cultures across Euro-Asia and beyond which has huge implications for the internationalisation of the renminbi (RMB) and for Chinese statecraft in the design of an open Chinese ‘liberal’ international order.

Yet Xi has also centralised power to an unprecedented extent in modern times, creating the Central National Security Commission that coordinates the police, army and national security agencies as well as the Central Military Commission. Xi’s The Governance of China (2014) helps to clarify the principles of governance of the CPC, China’s development path and the new concept of the Chinese Dream (中国梦), which he first introduced into Chinese politics in 2012.

Xi’s book was published in response to rising international interest and to enhance the rest of the world’s understanding of the Chinese government’s philosophy and its domestic and foreign policies. Above all, it was intended to provide a statement about China’s peaceful development in order to alleviate Western fears about China’s rise to superpower status and the attendant implications for global stability and the international order. The Governance of China contains a firm commitment to ‘opening up’ internationally, with an emphasis on competitive globalisation, market-based interest and exchange rates, and greater market access with the protection of foreign investors’ interests and rights –  although the ‘trade wars’ will alter this.

Other topic areas include the enhancement of law-based governance with an emphasis on compliance with the constitution, anti-corruption measures, and a commitment to ecological management and the protection of natural ecosystems. Significantly, the plan includes a vision of global leadership through Chinese diplomacy and globalisation of the Chinese socialist model.

Trump’s Wall and Xi’s Road are powerful metaphors that signal alternative narratives and readings of national dreams. One is open, international and aimed at building new global alliances and connections; the other is deeply xenophobic, closed and protectionist based on an ethos of national division. In terms of the ethics of the other, the Chinese moral vision provides an alternative to Trump’s America which has jettisoned its internationalist values.

Michael A. Peters is Distinguished Professor of Education at Beijing Normal University Faculty of Education, PRC, and Emeritus Professor in Educational Policy, Organization, and Leadership at the University of Illinois at Urbana–Champaign. He is the executive editor of the journal Educational Philosophy and Theory, and founding editor of five international journals. He is currently working on a new book entitled The Chinese Dream: A Western Perspective. Image credit: CC by Thomas Hawk/Flickr.

The new triangular relationship between the US, China and Latin America
Economic Inequality and Low Wages in Taiwan