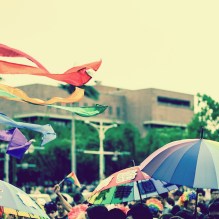 If 2017 saw the rise of marriage equality in Taiwan, then the backlash in 2018 suggests many observers held an overly optimistic view on just how much Taiwanese public opinion had shifted. With the March 2017 Constitutional Court deeming the existing civil code that limited marriage to heterosexual couples as unconstitutional, the expectation was that legislative action would soon follow. Yet, despite the Democratic Progressive Party (DPP) controlling the legislature and holding the presidency, no meaningful effort was made to push legalisation through. Meanwhile, in roughly 18 months, public opinion polls shifted from a majority in Taiwan supporting legalization to a majority opposing it. The results of five referendums in the 2018 local election further indicated a shift in public opinion, suggesting that claims of Taiwan’s broader embrace of liberal ideas were less accurate than previously predicted.

So what happened? After all, the Taiwan Social Change Surveys of 2012 and 2015 found a slight majority of Taiwanese in support of legalization, with marginal differences between supporters of the KMT and the DPP. Most other surveys prior to the Constitutional Court decision found similar results. Yet the results of the five referendums related to LGBT issues in November were unambiguous, with Number 10 the clearest: 72.5% agreed that the Civil Code should remain restricted to heterosexual couples.

One common argument is that conservative groups effectively organized opposition against legalization similar to that seen previously in the United States, which took off shortly before Taiwan’s Constitutional Court decision. However, this explanation undervalues the extent to which voters in Taiwan had fixed positions on issues like same-sex marriage, as many remained indifferent or had weak preferences at best. If positions on same-sex marriage were fixed, either supporting or opposing, then not only would we not have seen such dramatic changes in polling results, but conservative groups would have had to rely primarily on mobilizing turnout.

In other words, the success of conservative opposition was likely due in no small part to many Taiwanese remaining indifferent or, at best, weakly supportive of legalization. Still, these individuals could have been persuaded to support either side. While many DPP supporters of same-sex marriage and LGBT rights more broadly (e.g. legislator Yu Mei-Nu) spoke out in favour of legalization, in large part they lacked a clear message that would appeal to the otherwise indifferent, making the job easier for anti-LGBT groups.

Furthermore, our own experimental survey research conducted by PollcracyLab in March 2018 showed that public opinion on legalization appeared somewhat malleable based on how legalization was framed. In particular, simply mentioning the opposition’s claims that legalization would negatively affect family structure led to a decline in support across the political spectrum, in particular among DPP supporters. Such framing effects should not be a surprise as decades of research in political psychology suggest that frames appealing to potential losses or fears to be a stronger motivator than positive frames.

For these reasons, perhaps it was less important for conservative groups to mobilize turnout than to simply persuade indifferent Taiwanese across the political spectrum of perceived negative outcomes of gay marriage. In addition to frames that undermined the traditional family structure, some anti-LGBT groups claimed that gay marriage in Taiwan would increase the number of those who contracted HIV/AIDS, spread bestiality, and even incentivize children to become gay. One source went so far as to claim that foreigners with AIDS would be more inclined to marry local Taiwanese to gain access to national healthcare.

Though these campaigns focused primarily on gay marriage specifically, they may have also influenced the perception and acceptance of the LGBT community more broadly. While earlier polls showed support for same-sex marriage, few surveys asked about the broader acceptance of the LGBT community. While the World Values Surveys found a general decline in outright hostilities towards homosexuals, consistent with a broader trend in democracies over the past twenty years, other issues regarding acceptance are rare.

Our own web survey conducted through PollcracyLab in November 2018, for example, suggests mixed views on hypothetical support for those who were yet to come out. Whether framed as simply another Taiwanese person, a member of their community, a friend, a sibling, or one’s child, only roughly half of respondents stated that they would support the person coming out. Consistent with the earlier findings that many people are indifferent towards the matter of same-sex marriage, about 40% of the people surveyed gave neutral responses as to whether they would be supportive. For those who claimed they did not personally know a Taiwanese person who was LGBT, support for coming out across the groups fell to less than one third. More startling, a non-negligible percent of respondents expected that the legalization of same-sex marriage would have a negative impact on women having children before marriage (22.1%), crime (25.9%) and STDs (48.1%).

It is interesting to note, however, that despite the lack of support for those who come out as well as opposing same sex marriage, Taiwan still supports LGBT rights in other areas. For example, Taiwan hosts the largest annual pride parade in Asia. Additionally, several local ordinances regarding public housing and same-sex household registration have received widespread support. Also, while respondents in our November survey viewed gay marriage as more negatively impacting tourism within Taiwan, it is actually well regarded as an LGBT travel destination. Finally, only 10% of respondents outright opposed someone coming out, which suggests that most respondents could be persuaded towards more supportive attitudes.

While many within the DPP support rights for the LGBT community and broader inclusion initiatives, some DPP members remain indifferent at best. Cognizant of the lack of cohesive support within her party, President Tsai Ing-wen’s formerly supportive stance became more neutral over time. Simply because the party’s platform included support for same-sex marriage legalization and several key leaders in the party remained vocal backers, this does not overcome divisions among DPP supporters. Perhaps this misunderstanding, which one could view as wishful thinking, led to a miscalculation of durable support within the DPP base regarding support of gay marriage and led to a less developed attempt to woo those within the party who remained persuadable. Moreover, the DPP did little to counteract the emotional resonance of anti-LGBT groups’ rhetoric regarding gay marriage undermining traditional family values. Ultimately, the experiences of 2017 and 2018 teach pro-LGBT Taiwanese that winning over those initially indifferent to LGBT rights, including many that comprise the DPP’s traditional base must not be overlooked.

So, what does this mean for 2019? The backlash to same-sex marriage and the lack of attention to broader acceptance poses challenges for both LGBT organizations and the DPP more broadly. The Tsai administration, already dragging its feet on meeting its campaign pledges in 2016, is unlikely change course now, with concerns of the 2020 election looming. However, LGBT groups may have a stronger chance in pushing the Tsai administration if the political costs of supporting LGBT issues decline. Based on our previous research and the role of framing, LGBT groups may wish to invest time in identifying frames that generate support and counter opposition claims that same sex marriage undermines the traditional family structure.

Timothy S. Rich is an associate professor of political science at Western Kentucky University. His main area of research focuses on the electoral politics in East Asian democracies.