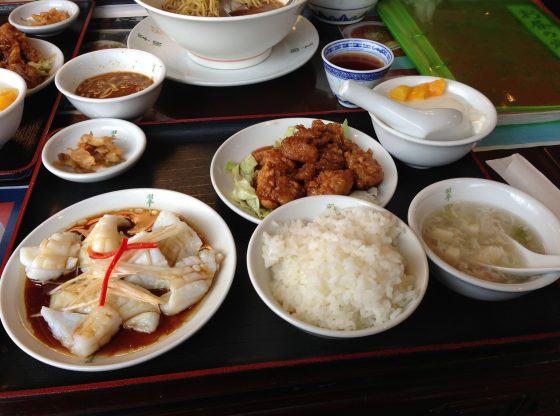 A little more than two hundred years ago, in January 1817, one of the greatest banquets in the history of Europe took place in the Royal Pavilion in Brighton, on the occasion of the visit of the Grand Duke Nicholas of Russia to George, the Prince Regent (later George IV, King of the United Kingdom of Great Britain and Ireland and King of Hanover).

The 120 dishes were not served as was usual in Western Europe up till then à la française, which meant that all the dishes were placed on the table at the same time and people helped themselves from the dishes nearest to them. Instead, for the banquet given by the Regent for the Russian Grand Duke, in order to honour his guest and to make sure that everyone had a chance to taste all the dishes, the serving style was à la russe, meaning that each guest was served a portion of each dish on a separate plate or in a separate bowl, one after the other. The place setting for each guest included a service plate, all the necessary cutlery except those required for dessert, and stemmed glasses for water, wines and champagne.

If that sounds familiar, it is because this is what is nowadays considered to be the ‘normal’ way of eating in Western countries. The spread of this habit across Western Europe – and the British colonies – was supported by the growth of an affluent urban population and the general acceptance of using a knife and fork in the early nineteenth century. The rural population, which had mostly survived on bread and pottage eaten with a wooden spoon from a common pot in Europe over many centuries, followed suit when people started to be able to afford a more varied diet as well as cutlery.

With the growth in Chinese outbound tourism over the last twenty years from less than ten million outbound trips to the 180 million outbound trips forecast by the China Outbound Tourism Research Institute COTRI for 2019, one of the never-ending discussions has been around the question: Do the Chinese always want to eat Chinese food when they travel?

Since 2004, the Hospitality Association of Switzerland has published several editions of a brochure to assist the Swiss hospitality industry to adapt itself to Chinese visitors, in which it states: ‘In fact, it would be unthinkable for the Chinese to enjoy something other than Chinese food when on a trip abroad’.

Food plays a key role in China. The new online training programme ‘Chinese Tourism Training’, produced jointly by COTRI and the Hong Kong Polytechnical University School of Hotel and Tourism Management, dedicates in its hospitality track a lot of attention to this topic: ‘Eating is not only connected with food intake; cooking as well as ordering the right combination of dishes is considered by many to be a science or an art form, and is also an essential part of social interactions’.

When travelling abroad, younger and better educated Chinese tourists are keen to try ‘genuine’ local food as an important part of the experience. Some might just want to taste a little bit of a local dish for lunch or dinner, but prefer Chinese breakfast and food for the rest of the day. Others will insist on ‘going local’ for the whole trip and take pride in bragging and sharing these experiences with their peers back home, who also consider themselves to be chihuos (foodies).

Less experienced travellers, especially those from lower-tier cities in China, are more likely to seek out Chinese restaurants overseas, even though the food is generally inauthentic and of poor quality. But even for them Western fast food and system gastronomy is well known. McDonalds, Pizza Hut, KFC and several Chinese clones of these chains are part of the normal Chinese range of food options. There are already more than 2,000 McDonalds and Pizza Hut outlets, respectively, and more than 5,000 KFCs, with most chains opening a new outlet in China every single day.

But of course eating food is not only about tasting new kinds of food; eating together is an important social act in Chinese culture. It enables the definition of hierarchies, provides opportunities to develop contacts and networks, and offers a forum to show off one’s knowledge and ability in ordering and commenting on – Chinese or non-Chinese  – food.

The experience of an atmosphere where one can share a large number of dishes around a round table in a group is of equal importance to the question of which dishes are consumed. Obviously, such a way of eating provides a much bigger variety of ingredients and flavours – with the problem of reaching dishes on the other side of the table having been solved by the ‘Lazy Susan’, a rotating platter that rests on the table-top, which was made popular by Chinese restaurateurs in the USA about 60 years ago (after previously inventing ‘Chop Suey’ as a way to re-create at least some of the variety of eating à la chinoise on a single plate for non-Chinese guests).

Another important and often overlooked aspect is the use of chopsticks, which, as a kind of extended fingers, do not require special attention when using them. You do not have to stop talking to or looking at your friends around the table while eating with chopsticks, whereas cutting a steak or Schnitzel or a cauliflower floret requires the eater to look at his hands to operate the cutlery in a safe and efficient way, making it more difficult to eat and talk at the same time.

The Chinese word for a jolly atmosphere is rènào, made up of the characters for ‘hot’ and ‘noisy’, the direct opposite of the German and Danish concepts of ‘Gemütlichkeit’ or ‘hygge’. ‘To speak loudly in a restaurant, or burst out laughing’ is still mentioned today in an online list of ‘Bad French Table Manners’, whereas in the above-mentioned hospitality service training, providers are taught that ‘if the food of a restaurant is good and tasty, the place will be crowded and noisy, as a sign of enjoyment. For this reason, the typical Chinese dining atmosphere involves talking loudly and laughing’.

The Chinese taught us how to take Selfies instead of taking photos of sights on their own, as well as the extensive use of mobile messaging services instead of writing emails. They also brought hot-water cookers into hotel rooms all around the planet. Therefore, perhaps under the guise of the ‘sharing economy’ we will learn to go back to eating à la française, with all the dishes placed at the same time in the middle for everybody to choose from and share.