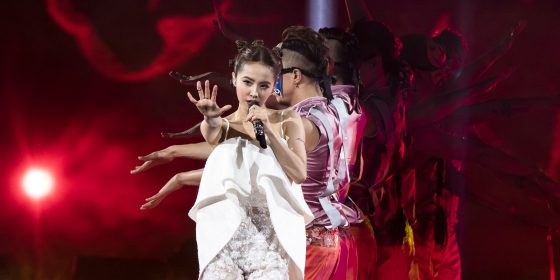 Music, politics and protest in Taiwan are intrinsically linked. From the rumblings of Taiwanese identity in the campus folk music of the 1960s to the emotionally charged Island Sunrise (島嶼天光) written for the 2014 Sunflower Movement and even the long-running environmental conservation efforts instigated on the island, a rich and diverse musical history has always provided support; spreading the story of the underprivileged, and documenting their hopes and struggles. Similarly, there is a wealth of music that has been produced to support LGBT people that for many years has bolstered the island’s image as one that is progressive and supportive of same-sex love. The canon of music representing the Taiwanese LGBT movement is as diverse as those who create it; spanning genre, gender and sexual orientation.

On 24 November 2018 however, Taiwan citizens rallied together to support several referendums spearheaded by conservative Christian groups. Up to 75% of Taiwanese voters not only voted to maintain the traditional definition of marriage, but also expressed desire to roll-back LGBT education in schools.

This article is not a commentary on the referendum results. Instead, we aim to take a look at the diverse collection of Taiwanese music which was created to support the LGBT movement and take a look at how these songs’ meanings are re-framed or deepened in a changing social and political climate.

Where these songs previously felt hopeful, welcoming, and full of love; viewed in the current socio-political climate it can be argued that these songs now take on a message of defiance: a protest against society simply by being brave enough to exist, and a symbol to prove the humanity and worth of the community at large. The fact that these songs may not have been viewed as political before is a testament to the false sense of perceived privilege the LGBT community enjoyed until now.

How can we now understand and situate the LGBT Mandopop cannon, and the artists who created its content? Where these songs previously felt hopeful, welcoming, and full of love; viewed in the current socio-political climate it can be argued that these songs now take on a message of defiance: a protest against society simply by being brave enough to exist, and a symbol to prove the humanity and worth of the community at large. The fact that these songs may not have been viewed as political before is a testament to the false sense of perceived privilege the LGBT community enjoyed until now.

An important aside: by re-framing the way we view these songs, we are also able to see that pop music is something that is constantly evolving and something that can be adapted to new situations. In this context, well-loved Mandarin pop songs in this current political climate are now seen as songs holding a message of resilience and defiance. All too often we lazily label music as protest music without necessarily realising that popular can also be protest; what this proves is that all pop music has the capability to change and adapt – no matter if it was recorded 30 years ago, or a new release hot off the press.

Whilst we can’t analyse every song with LGBT themes, we’re going to provide several examples of songs in Taiwan’s LGBT mandopop canon, understand their original meaning, and then try to understand how we can view them in light of the referendum results.

​In one of the most recent additions to the selection of LGBT Mandopop anthems, Unlimited Love 框不住的愛 (2017), new-gen Malaysian singer-songwriter Evangeline (王艷薇) offers a love is love message and encourages LGBT people to bravely come out of the closet. The darkness that surrounds you is there because you are hiding in the dark, and coming out will allow the light to shine. In a post-referendum reality Unlimited Love takes on a much more poignant message. Unfortunately, the darkness in the closet may still be there when you come out. But reject the darkness and camouflage that others try and cover you with: love is a force that will conquer all. Although now it may rain, if you fight through it, the sun will eventually come out.

​A-Mei (張惠妹) has long championed same-sex equality through her music, for example featuring a gay wedding in her video Love Is Everything (愛是唯一) all the way back in 2004. It is her love letter to the LGBT community Rainbow (彩虹) that we are looking at here. Previously, the song has been considered a declaration of love: A-Mei herself said the lyrics refer to “true love. Where there is love, there will be rainbows.” Love should not be hidden away, certainly not in a closet. It’s also a reminder to cherish everyone around us, no matter who they love.

In the current climate, the symbolism of the rainbow is even more potent. The iconography of a rainbow is powerful; after the heaviest rain a rainbow will appear, and similarly no matter the prejudice faced by the LGBT community, it will always re-appear bright and strong; a spine-tingling sentiment. Her lyrics ‘When the sky is dark / when the temperature is not normal / you have to resist with great strength’ has never felt more powerful than it does today. Hardships against the LGBT community are real, but we must persevere in this fight.

​Jolin Tsai (蔡依林): We Are Different, But the Same (不一樣又怎樣)

Through provocative songs and music videos that promote self-love and understanding personal differences, Jolin Tsai (蔡依林) has become one of the most visible icons for LGBT people not just in Taiwan, but across Asia. An example of this is her 2012 video Fantasy (迷幻), which depicts a flamboyant Garden of Eden overflowing with LGBT characters.

Yet another video of hers, We’re Different, But the Same (不一樣又怎樣) has always packed an emotional punch, and has always been inherently political; the video was even banned in Singapore and China because it depicts same sex marriage. Whilst the video depicts how current legislation discriminates against LGBT couples, the song tells us that regardless of differences, we are all just people.

The political nature of this song and video combination is starker than before; I can’t help but feel that the people of Taiwan prefer the dark side of this video as their reality, thereby rejecting the sentiment of the song. In this new societal context, the video now feels less like playing a sympathy card to elicit a response from the public, and more like making them face the pain they are causing the LGBT community. Likewise, lyrically the song feels less like a plea for acceptance, and more of a statement of fact: We may be different, but we are the same.

Whilst Mayday (五月天) may not be the first group you think of as being advocates for LGBT rights, we can look back at their 2006 smash hit  Endless Summer (盛夏光年)  to see that they too have played a role in vocalizing support for the community. This sing-a-long anthem was the theme song for the 2006 hit movie of the same name, and the song perfectly encapsulated the film’s theme of confused young love, and discovery of how their feelings and identities fit into Taiwanese society. Now, the lyrics of Endless Summer 盛夏光年arguably transcend their original meaning, and instead offer the perspective of wanting to disassemble the ordinary nature of society, and an impatience for such an action to occur (I am proud of the destruction, I hate the ordinary… / Give up the rules, indulge in love)

Antonio Huang (黃宥傑) sent shock-waves through Mandopop when he released Criminal Lover (傷愛罪) in 2014. A frank depiction of self-discovery, it was one of the first songs to frankly address the realities of LGBT people in Taiwan, and the first to explicitly look at the LGBT community in a sexual sense. The song and video focused on the topic of love acceptance, and the video captured the building up of fear and struggle resulting in the eventual loss of inhibition in a private-yet-public space.

How has this song’s meaning changed? Arguably we can now frame Criminal Lover two separate ways; firstly, changing the focus from the individual to the community, and secondly perceiving the lyrics as coming from a place of anger, furious at a society that refuses to view the community on an equal footing, and explicitly stating that these actions are hurtful (How did this beauty become hideous? / Invisible injuries are the most painful / They do not bleed, but they are a torment). The criminal aspect of the song now feels inherently radical, and that gay rights and indeed gay love remains outside the realm of ordinary. The frank video remains as culturally shocking in 2018 as it did in 2014, yet such shock tactics may be more necessary than ever before.

As Taiwan’s LGBT community reels from the result of the referendum, they can find solace in the rich collection of Taiwan’s LGBT music cannon. Those songs that saw the community fight against discrimination, against inequality, and espouse the values of freedom, individuality and defying the status quo have an even more important meaning now than they did before.

Matt Taylor is a graduate of MA Taiwan Studies from SOAS, University of London. He currently works within the Ministry of Culture at the Taipei Representative Office in the UK. Matt is also a contributor for Asian Pop Weekly – a website dedicated to analysis and understanding of Mandarin pop music. Photo Credit: Flickr/ Gene Wang. This article was adapted from Matt’s article on Asian Pop Weekly.

Women as Workers, Women as Agents: Studying Labor and Gender in Industrial and Postindustrial Taiwan
Career expectations of Chinese international students and returned graduates after hospitality and tourism study abroad