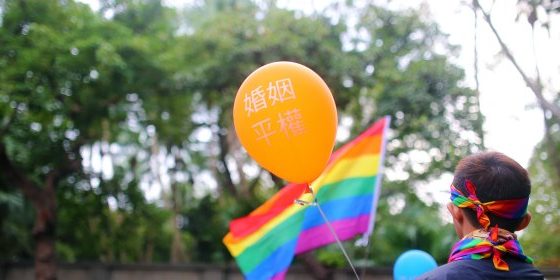 In part one of this two-article feature, where we are trying to understand the impact of the November 2018 same-sex marriage referendum results on how we can perceive and consume LGBT-friendly Mandopop from a Taiwanese perspective, we attempted to re-frame songs already situated in Taiwan’s LGBT Mandopop canon, and how their messages of love and understanding can now be perceived as messages of resilience and defiance.

In this second article, we will focus on how the referendum results may impact the future of Mandopop production (both by queer artists and allies of the community), its reception from an LGBT perspective, and consider this in relation to the influence popular music has on society.

In terms of music yet-to-be created, there is a very real possibility that maybe now, we might see an increasing overt and direct politicisation of Taiwan’s queer music and its artists. There is an argument to be made that animosity and disapproval are a great catalyst for non-conforming art. Indeed, it can be incredibly satisfying to gain power from something that has fought with all its might to make you feel negligible, and LGBT songs can now be sung even louder to subvert the attitudes of Taiwan’s society.

It’s also important to consider how we can frame the musicians who have used their platform to voice support for gay rights. Whilst pop stars have often stayed out of politics, the messages of love and equality that were being preached before take on a new sense of radicalism, and we can argue that musicians inadvertently take on a leading role in social activism, and as a result, should embrace the inherent political core these songs now have.

Furthermore, do we need to expect greater tangible actions by Taiwanese musicians? Have we reached the point where sharing a post on social media is not enough? It’s all well and good to sing about love and acceptance, but perhaps we now need musicians to lead more by example – collaborate and donate time & resources to one of Taiwan’s many LGBT support organisations for example, or include more LGBT themes in their songs and videos. In terms of social media, why not be even more outspoken?

The 2016 ‘Love Is King, It Makes Us All Equal’ concert in Taipei, (愛最大演唱會 十星開唱挺平權), which saw numerous high profile pop stars perform to promote marriage equality was a powerful statement – not only should we see more concerts on this level, but indie musicians could also get involved on a smaller scale, thereby having an even greater reach to the community.

We Are One (Feat. Tanya, aMei, Sandy, Naying, Rainie, Elva, Alin and S)

Indeed, in the months following the referendum we have already seen several musicians inspired to address the result in their music. In January A-Lin (黃麗玲) released Rainbow After the Rain (雨後彩虹), which she recorded to inspire her LGBT fans to continue fighting despite the setback. R-Chord (謝和弦) also chose to make the subject of his music video for Spare Tyre 備胎: a love story between two women. Not only does this MV frame a typical love story in an LGBT perspective, it’s particularly interesting given his devout Christian faith – perhaps evidencing that Taiwan’s many Christian communities are not only fragmented on the issue, but are now willing to vocalize their opposition against groups with an anti-LGBT agenda.

Music is perhaps the most powerful tool to ensure that the LGBT community are unavoidable and unapologetic in the face of adversity, and the music must not only represent this defiance, but must be sung louder than ever before. Pop music itself cannot change the law, but it can certainly work to mobilise and unite a community under a single message from which the influence of society and legislation is possible. A-Mei got it right when she said in 2016 that “Love is a right. Your love requires more courage than others. I will accompany you on this long and arduous path. One day, we will celebrate the victory of true love in a rainbow Utopia.”

As Taiwan’s LGBT community reels from the result of the referendum, they can find solace in the rich collection of Taiwan’s LGBT music cannon. Those songs that saw the community fight against discrimination, against inequality, and espouse the values of freedom, individuality and defying the status quo have an even more important meaning now than they did before.

To bring the article to a close, it feels appropriate to end with a song by Li Te-yun (李德筠) titled The World is not Lonely(我的世界沒有孤寂), where she asks: why does our happiness require the agreement of others? / why can others decide whether I love you or not?

It doesn’t, and they can’t.  What we previously took as a voice of acceptance is now a rallying cry of resistance – the LGBT community of Taiwan is not going away, nor will it stop fighting for its goal of equality.

Matt Taylor is a graduate of MA Taiwan Studies from SOAS, University of London. He currently works within the Ministry of Culture at the Taipei Representative Office in the UK. Matt is also a contributor for Asian Pop Weekly – a website dedicated to analysis and understanding of Mandarin pop music.  Photo Credit: Flickr/ Toomore Chiang. This article was adapted from Matt’s article on Asian Pop Weekly.

Lawfare by proxy: Huawei touts “independent” legal advice by a CCP member
The lamb goes quietly to the slaughter