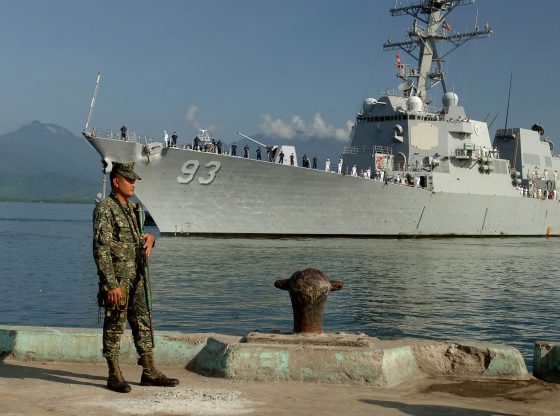 My continuing research interest in the Philippines’ first ever publication of a National Security Strategy (NSS) in 2018 is driven by at least two reasons. The first is that the NSS contains the strategic choices of President Rodrigo R. Duterte, who set aside the Philippines’ 2016 victory in the International Arbitration ruling against China’s territorial claims in the South China Sea (SCS) and undermined the Philippines’ alliance with the United States in favour of diplomatic and economic benefits from China. The second is that Duterte’s foreign policy behaviour directs us towards insightful research puzzles concerning small states’ national security policies.

The government’s self-appraisal of having a weak military and a corrupt bureaucracy renders the Philippines small and vulnerable in the face of huge internal and external threats.

Traditional research on small states in International Relations (IR) explains that size correlates to a country’s limited capacity and narrow range of policy manoeuvre to protect its national interests. Using quantitative methodology, size is measured in terms of territory, population, economy, and military. States that are classified as small are contrasted with large states, the latter having the strength and resources to overpower the former. While being large is correlated to power, being small is perceived as a handicap in regard to state action and survival. This theory argues that in identifying the common structural characteristics of small countries, one is able to understand their inherent vulnerabilities and insecurities and also to make generalisations about their behavioural tendencies and policy responses.

In a 2017 study ‘Revisiting the Definition of Small State Through the Use of Relational and Quantitative Criteria’, Croatian researchers came up with a list of 124 small states from around the world. The list includes, among others: small states, microstates, and Western Balkan states in Europe; newly independent states from the former Soviet Union and other small states in Central Asia; small states in the Arabian Peninsula, South Asia, and Southeast Asia; Caribbean states and other small countries in Central and South America; small states in Africa; and the Melanesian, Micronesian, and Polynesian states in Oceania. Notably, the inventory does not include the Philippines in Southeast Asia, only Brunei, Cambodia, Laos, Singapore, and Timor-Leste.

The conspicuous exclusion of the Philippines in the list of small states is a conceptual issue that needs to be resolved if the small states category is to have any analytical value in understanding the unique case of an outlier. The puzzle is particularly significant in studies of power disparity and the national security of weak states. This leads us then to ask the following questions: Is the Philippines – an archipelago made up of 7,640 islands, with a population of 107 million and Gross Domestic Product (GDP) of US$354 billion growing at an average annual rate of 6.5% – a small state or not in the region’s security landscape? How do the country’s security mentality and policy, as articulated in its NSS, reveal its political size and perceptual weight in the strategic domain? And how does the small state security syndrome manifest itself in the policy choices and strategic approaches of the Philippines in relation to national security?

What smallness means in the strategic setting

A review of postmodern qualitative studies of small state phenomena shows that there are no rigid criteria or consensus on how these countries are defined and analysed. In fact, what determines state size is a key conceptual debate in IR. As Maass argued in a 2009 journal article, the rigid definition of small state is elusive and even rejected, since size cannot sufficiently be defined by quantitative data. Other dimensions of size also need to be studied – aside from population, GDP, and land area – to explain what smallness means to states in the strategic setting.

In the classical realist interpretation, when nations conferred to institutionalise sovereign states and fought wars to secure their interests, small states were those that had no voice, defence capabilities, or significant contribution to offer the international order. They were those that had no choice but to suffer defeat and ‘obey the rules of the game, because they were too weak to be taken seriously when rules were negotiated’. This is how Wivel et al. described the scene set for small states in international security.

From a realist perspective, smallness thus connotes weakness and powerlessness to influence outcomes at the systemic level. In a field where great powers rule, vulnerable states are seen as small, marginal, and even insignificant. However, whether this holds true in the twenty-first-century liberal order remains to be seen from the perspective of individual country experiences of asymmetric relations.

Why the Philippines is small in its NSS

In deconstructing the 2018 Philippine NSS, I would argue that the Philippines is a small state, despite its large economy and manpower and abundant inlands and waters. Its political size and perceptual weight are related to a spatio-temporal security context as well as to a socially constructed milieu, which make the state small, weak, and insecure. This is apparent from a reading of the geo-political relations, threat perceptions, policy orientation, military capability, and national ambition as outlined in the Philippine NSS.

The country’s external security environment is described in the NSS as highly uncertain and unpredictable because of ‘rising tensions’ in the ‘bitterly contested’ SCS to the west of the Philippine territory, and because of great power competition and militarisation in the region. According to the NSS, this condition prompted the Philippines ‘to give the same attention to territorial defense as it does to internal security threats’.

Nonetheless, given the magnitude of domestic problems, addressing armed insurgency, rebellion, and terrorism remains the top security concern in the NSS. Fighting criminality and illegal drugs, along with curtailing corruption in the criminal justice system, are also very high in the list of strategic priorities. With public safety and governance seen as the topmost national interest, the NSS underscores the urgency to modernise the Armed Forces of the Philippines (AFP) and ‘synergise’ it with the Philippine National Police (PNP).

One of the instruments of national power in the NSS is termed ‘military and law enforcement’. This is defined as ‘the use of well-equipped, trained, disciplined, and motivated armed forces to maintain law and order at the homefront, and to safeguard and defend the country’s sovereignty and territorial integrity from any threat of foreign armed aggression’. However, the NSS also recognises that the multiple functions being performed by the AFP have already strained its limited equipment and resources. It mentions, among others, that ‘[c]urrently, the Philippines has difficulty patrolling its vast expanse of water due to lack of equipment and resources stemming mainly from meager border security and defense funding’.

In scanning the strategic environment, the NSS notes that the AFP is ‘one of the weakest in Asia’ and admits that this puts in doubt the country’s ability to defend and protect itself. In an apparent move to compensate for this weakness, the NSS cites plans to ‘strengthen cooperation and peaceful approach with countries sharing common maritime borders and interests’, enhance ‘alliances’, develop new security agreements, and expand engagements with regional and international institutions.

Notably, the defence and foreign policies in the 2018 NSS are geared towards realising the government’s vision for the Philippines to become by 2022 ‘a secure and prosperous nation wherein the people’s welfare, well-being, way of life and core values; government and institutions; territorial integrity and sovereignty are protected and enhanced and confident of its place in the community of nations’. This modest and short-term aspiration in the NSS tells a lot about state size and status. The government’s self-appraisal of having a weak military and a corrupt bureaucracy renders the Philippines small and vulnerable in the face of major internal and external threats.

Ananda Devi Domingo-Almase, DPA is a Professor III at the National Defense College of the Philippines (NDCP) and the Course Director for National Security Policy and Strategy in the Master in National Security Administration (MNSA) course of the NDCP. The views expressed in this article are hers alone and do not reflect the opinion and position of the NDCP nor the Department of National Defense that supervises the College. Image Credit: CC Wikimedia Commons.