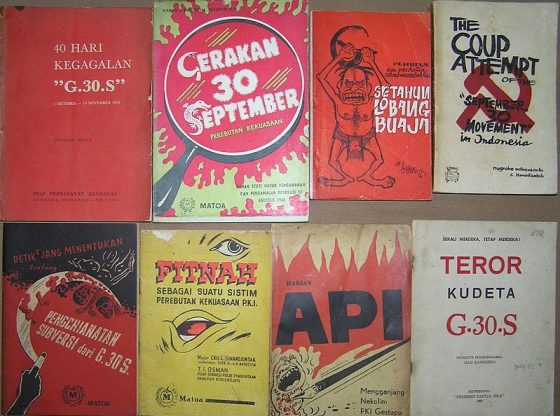 On 26 December 2018, an Indonesian National Army (TNI) unit raided a book vendor in Kediri, East Java. They seized a handful of titles – all history books – about the nation’s turbulent politics in the 1960s. The army claimed the books were illegal as they promoted Marxism. Similar events in Padang, West Sumatra, and Tarakan, North Kalimantan (Borneo) followed.

These raids raised many concerns around the archipelago, especially as Indonesia is headed towards a presidential election this spring. It is clear that Red-baiting and paranoia over the legacy of the Indonesian Communist Party (PKI) and its bloody destruction will remain potent factors in national politics.

The PKI was the subject of a massive politicide from 1965 to 1966. After failed revolts in 1926 and 1948, the party adopted a successful parliamentary path to power in the 1950s. Forging alliances with unions and other progressive social forces such as the LEKRA arts group and the GERWANI women’s movement, as well as promoting a peasants’ league and an ethnic Chinese organisation, the PKI was at the head of a wide-ranging social movement, arguably embracing what we would now call ‘intersectionality’.

However, after a failed military coup was linked to a few PKI leaders, the TNI suddenly and violently eliminated the PKI. Under General Suharto’s leadership, the military, religious mass organisations, militias, and organised criminal networks systematically slaughtered hundreds of thousands of party members and their allies. A larger number were arrested and held in brutal conditions for over a decade. Even after release, they bore the social and political stigma of being EKS-TAPOL, former political prisoners. The violence of the 1960s should be understood not just as an attack on the PKI as a party, but as part of a larger cultural war in which far right forces violently crushed their progressive opponents and ruthlessly oppressed them for well over a generation.

A rabid strain of anti-Communism underlined three decades of military rule by the self-titled New Order from 1966 to 1998. The Suharto regime so vilified the PKI that the term Communist became an insult. One of the new regime’s earliest moves was the Provisional People’s Consultative Assembly Decree (TAP MPRS) Number XXV/MPRS/1966, which prohibited the dissemination of Marxist, Leninist and Communist teaching.

Anti-Communist indoctrination was so pervasive and so successful that even after the fall of Suharto the Reformasi government (1998-present) reaffirmed the ban with Law Number 27/1999. As recently as 2016, civilian President Joko ‘Jokowi’ Widodo pledged his support for prohibiting alleged Communist propaganda.

Sometimes measures to enforce the law can be comical, such as the seizure of toys, but it has also led to the arrest of activists and even tourists for wearing the wrong T-shirt. Anti-Communist hysteria can also turn violent, as seen in the September 2017 riot at the Jakarta Legal Aid Institute. Spurred on by social media rumours of a PKI event that would include the singing of the banned leftist folk song ‘Genjer-Genjer’ as well as ‘fake news’ stories, a mob attacked this NGO, leading to injuries and arrests.

Blending into current Islamist identity politics and Sinophobia, anti-Communism remains a potent force at the intersection of contemporary Indonesia’s culture wars and national politics. Some hold that an underground PKI exists, posing a latent threat to the nation.

In the summer of 2018, a frustrated Jokowi denied rumours of his secret membership in an alleged clandestine PKI organisation. With exasperation, he noted that he was born in 1961 and the PKI was destroyed in 1965. He sarcastically asked if there was a PKI toddlers division. Yet on 3 December 2018 a large banner linking Jokowi to the PKI – and supporting his far right opponent Prabowo –­ was displayed on a busy Jakarta street and promoted on Twitter. The appearance of the banner was followed by the raids on booksellers.

While some observers were relatively philosophical about the raids and noted their absurdity, others were much more concerned. An editorial in a leading paper condemned the threat to freedom of speech. On 15 January 2019, I spoke with my friend Bonnie Triyana, editor of Historia and author of one of the seized books. He noted that his magazine had withstood repeated criticism for discussing the history of the PKI in an objective manner. The following night he took to national television to debate with an outspoken proponent of the raids.

Things became more menacing in late January as the Attorney General and the Minister for Defence endorsed the actions and suggested a wider campaign. Both men cited the fear of clandestine PKI members seeking revenge. Meanwhile, book vendors criticised the raids, arguing that the books were legally published and could easily be copied. Wahyu Wagiman, the Executive Director of the Institute for Public Research and Advocacy (ELSAM), expressed dismay at the threat to free speech and maintained the raids were in violation of personal property rights.

Seen in the context of Indonesia’s five-decade history of using Red scares for political purposes, anti-Communism will remain a powerful and dangerous force as we approach the 17 April presidential election. Clearly social media and identity politics will fan the flames. Expect more trouble and attacks on history in the coming weeks.

Continuing strains in Sino-Australian relations
A politics of hope: The new generation of Thai politicians