The state of the states: The crucial regional parties and the upcoming parliamentary elections in India. Part I

Home /Elections, India/The state of the states: The crucial regional parties and the upcoming parliamentary elections in India. Part I 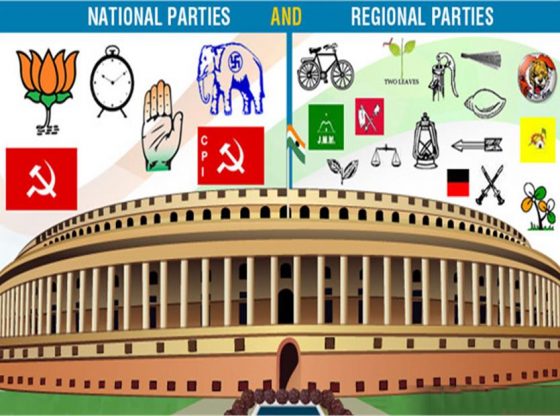 Who will win the upcoming parliamentary elections in India? I will not risk placing bets, although the incumbent Bharatiya Janata Party (BJP) still looks as having more chances than its rivals. But while its leader and the current Prime Minister, Narendra Modi, rode on the white horse of a carefully constructed image towards the electoral success of 2014, his stallion and armour are now bruised from recent setbacks. He may still win, but he may also need allies more than ever before – including the neutral powers that do not form the auxiliary forces of his huge army right now.

Last time, in the 2014 national elections the BJP achieved its best electoral result ever. It was the first time that this Hindu nationalist party reached a majority on its own. Moreover, it was the first time in 30 years that a single Indian party won a majority of seats in the central government. This could have been just an exception to the rule, however. It is expected that Modi’s party will get fewer seats this time.

The BJP is a part of a broad coalition – the National Democratic Alliance (NDA) – but one possible scenario is that even the joint forces of the NDA may not be enough this time.

In an article I wrote for The Diplomat, I tried to consider which of India’s 29 states may be crucial for the election’s outcome, and in which of these states the large regional parties may emerge as crucial powers – crucial in the event that there is no decisive winner. These fence-sitters will not enter formal alliances now, but they may enter seat-sharing agreements or at least avoid damaging their prospective partners. The six key battles that involve regional parties will be fought in Uttar Pradesh, Bihar, Maharashtra, Andhra Pradesh, Tamil Nadu and West Bengal.

I will not outline the general situation in those states here, however, as I have already done so in the above-mentioned article for The Diplomat. My plan for Asia Dialogue is to try to follow the developments in these six states on a monthly basis, in the form of a monitor. To be sure, I am not saying this will allow me to predict the outcome. As always, there are a host of factors and trends to be taken into consideration here, and every constituency matters.

These six cases are my weather stations. By restricting myself to them, I may not forecast the weather correctly, but I may assess the general course of the storm (especially if, to repeat, there is no clear winner). This first piece follows developments in Maharashtra, Bihar and Tamil Nadu. The second piece will cover Uttar Pradesh, West Bengal and Andhra Pradesh.

The state will witness a contest between two duos, a combination which it already very well-known. The incumbent BJP will be aided by its long-time-but-difficult ally Shiv Sena against a party pair of Congress and the Nationalist Congress Party. The BJP and Shiv Sena have now entered a seat-sharing agreement, splitting the constituencies which they are to contest in half: 25 seats for each party. This suggests that the BJP feels a bit weaker now towards its partner, but only a little; last time the BJP took 26 seats and Shiv Sena 24 in a similar agreement.

An interesting side-effect of this agreement is that the BJP reportedly had to fulfil some of Shiv Sena’s demands to seal the deal (and this indicates even more BJP’s weakening position in the state). One of these demands, according to media claims, was to shift the location of a planned refinery due to protests by local farmers. The refinery is to be a huge Saudi investment in Maharashtra, and the decision was taken just before Crown Prince Mohammad bin Salman’s visit to India – a small example that in very particular circumstances and on rare occasions the dynamics of India’s state-level politics may affect its international relations to some degree.

Here the stage looks set and no twist in the tale is expected at this point. One side of the battlefield is already occupied by an alliance of the BJP and Janata Dal (United), and the other by the Congress and the Rashtriya Janata Dal (RJD, National People’s Party), with smaller allies getting ready in the rear. Contrary to the alliance discussed above, this one has not signed its internal seat-sharing agreement yet and it is reported that Congress is finding it hard to finalise this deal with the RJD. These differences will surely be hammered out eventually.

The two biggest regional parties in the southern state are the All India Anna Dravidian Progressive Party (AIADMK) and the Dravidian Progressive Conference (DMK). The DMK is already in alliance with Congress, so it mainly boils down to the AIADMK’s result and whether it will support the BJP after the elections.

A seat-sharing agreement was finalised on 19 February between the BJP and the AIADMK along with a smaller party, Paattali Makkal Katchi (PMK). The BJP eventually received only 5 seats as a result of this deal, but that is not unexpected. The rigid Hindu nationalists that stand behind the BJP never really felt at one with the identity specifics of the Dravidian South and the BJP is pretty much a non-entity in Tamil Nadu. Last time it won just one seat in the state, so the award of five constituencies to its candidates may still be overestimating its chances.

The biggest question mark is over AIADMK’s performance. It is the incumbent party and it went through a very bitter internal battle for its leadership recently, a struggle that might have left it weakened. The BJP is left in the role of observer in the state, and must keep its fingers crossed not only that AIADMK will achieve its best possible result, but also that it will support the BJP afterwards. Tamil Nadu will also be having some by-elections before the national vote in April/May, and the results of these may be interpreted as a sign of things to come.

Krzysztof Iwanek is Head of the Asia Research Centre at the War Studies University in Warsaw, Poland, a regular contributor to The Diplomat and an irregular contributor to Lowy Institute’s The Interpreter. He also teaches the history of India at the University of Warsaw and used to teach Hindi at Hankuk University of Foreign Studies, Republic of Korea. His main fields of interest are contemporary Indian history and politics.  Image Credit: CC Times of Election.