Programming Languages and Rails Girls: On refactoring the social norm 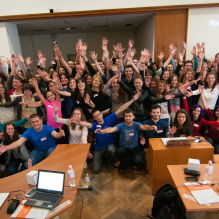 During the first half of the 20th century people working for women’s rights achieved many legal victories, bringing equality in voting rights, of education, of individual economy, and of marriage and divorce to many people around the world.

However, this equality in law does not readily translate to equality in practice. As Simone de Beauvoir observed in 1949, many societies make women feel inferior not by law, but through the act of Othering in languages and in actions. Men are presumed as the default subject, and women are constantly reminded that they are the collective Other by the way they are treated; as a group they are different from the default.

For example, a particular society may confine women into one of two primary roles: either as a Girl — an adorable object of desire, harmless, and of inferior status; or as a Mother — a caretaker, provider of emotional support, and a reproductive agent.

What’s missing in this picture is, of course, the various destinies that each of us wish upon ourselves. We encounter social pressure whenever we happen to contradict one of the expected roles.

We can fix this problem by adopting the vision:

Biology should not determine Destiny.

In practical terms, it is helpful to re-introduce the concepts of scripts and programs, this time from the field of social studies.

Larry Wall said this in his 2007 talk on scripting languages:

Here we see social scripts are actions expected of people to act according to their roles. In contrast, a social program informs participants what to expect from the norm, but does not dictate people’s behavior the way scripts do.

As a concrete example, when I began my IT career as the webmaster of a small publishing house “The Informationist” in 1994, I worked both online via a BBS and in the office. Many of our staff were openly LGBTQ and LGBTQ-supporting; it was a safe space to explore my gender expressions.

The press turned into a software company in 1995, when I became its Chief Technology Officer, and started participating in the global Free Software community.

While Taiwan’s software sector at that time was generally gender-balanced, it shocked me to find that male-dominant scripts were prevalent in online Free Software communities.

After a while, I learned that many women on forums and chatrooms used male-sounding nicknames, not because it was their preferred gender expression, but as a protection against harassment. This was obviously a problem.

In 1998, the Open Source movement started and I helped run a few startups in Silicon Valley, China, and Taiwan. As I started attending conferences and giving talks, I couldn’t help but notice the lack of variety in gender expressions and in ethnic distribution.

After I returned to Taiwan to work on local open culture communities, I started consciously using the feminine pronoun in all my Chinese online writings, in an attempt to turn around the language’s othering aspect.

When we started organizing our own conferences in 2003, I also made efforts to invite only the most socially compassionate speakers from abroad, who helped establish a more relaxed atmosphere where people can enjoy a safe space.

However, as Open Source gained commercial popularity, sexualized practices of IT industry trade shows started to affect our conferences as well. One of these practices is hiring promotional models to generate interest at a vendor’s booth; another is offensive imagery in conference content, including from prominent speakers in both Free Software and Open Source communities.

In 2009, Skud, a long-time fellow hacker in the Perl community, started to speak widely at conferences on this subject. She created Geek Feminism, a wiki-and-blog platform to list the issues and work together to improve them.

After a year’s work, participants in the wiki created a Code of Conduct template, a social program that sets the expected norms. Valerie Aurora and Mary Gardiner, two Geek Feminism contributors from the Linux community, formed the Ada Initiative in 2011 to support women in open technology and culture.

Between 2011 and 2015, with help from many contributors, the Ada Initiative worked with over 100 conference organizers to adopt the code of conduct program. I’m very glad to see the upcoming Rails Girls Summer of Code event among the list of adopters.

There are three main elements of such a program:

Together, they ensure a space where people can be aware of their own social scripts and their effects on each other — and refactor them into a more sustainable community with openness and variety as a coherent vision.

To me, the most enlightening bit is perhaps not in the code itself, but in its programming — the fine-tuning of a conduct that fits best with the local culture.

When we create a safe space for a community’s participants, to observe and decide our own social scripts, we can collectively program a social norm that is both rigorous and creative — just like the best formulas, poems, and programs.

I would like to know you
not by your types,
classes or roles —
— but by your values.

Audrey Tang is the Digital Minister in Taiwan. She joined the Executive Yuan as a minister without portfolio in 2016. Image Credit: Flickr/ Dimitar D.  This article is an excerpt of the transcript of her speech delivered at for TedxTaipei 2017 (See: Full transcript).

Pakistan’s relations with the Middle East in the era of Imran Khan
2019: Australia, China and the South Pacific