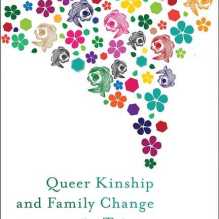 On my way to do an interview, I got off at the wrong train stop in between Kaohsiung and a small town in Pingtung, the southernmost county of Taiwan. I was in fact only one stop shy of the correct station, but I got off prematurely because I had not seen a building for many kilometers and thought I must be headed the wrong way. In a flurry of texts sprinkled with emojis, my host Coral Lu assured me that I was on the right track and that she was on her way to pick me up (All names used in this blog post and in the book are pseudonyms). She added that I might not recognize her because she would have a masculine appearance. When we met one another at a trans gathering in Taipei some weeks earlier, she wore a stylish dress, heels, and full makeup. Coral alternates her daily gender presentation, sometimes donning a masculine appearance as conventionally expected of her male sex but usually opting for the feminine appearance with which she feels especially happy and at ease.

As it turned out, I had no trouble recognizing Coral, not only because hers was the lone car to pull into the station but also because she looked no different than any person might when changing clothes, her quiet elegance as perceptible in jeans as in a dress. Coral drove me to her family home and we conducted our interview in the semi-privacy of her bedroom, punctuated by the arrival of her grade school niece and nephew, who darted boisterously in and out of the room.

I did not know how many members of the Lu family I would meet that day. In the end, I met her brother, her sister Fanyu (whom I also interviewed), her sister’s daughter and son, her mother, and several family friends. I canceled my plans for a return trip to Kaohsiung and spent the day with this family as they visited at home, walked together in a nearby park, posed for photos by a pond, and ate dinner in the food court of the local Carrefour. Our conversations about Coral’s gender mingled with other everyday topics such as shopping for clothes and plans for an upcoming holiday.

This sort of day was typical of my fieldwork with queer people and their families in Taiwan. A visit to interview one family member often spiraled into a whole-family affair due to shared and closely proximate living arrangements. While some people chose to be interviewed at places and times that maximized their privacy, others welcomed family members to chime in or urged them to be interviewed too. Contrary to stereotypes about the relative conservatism of people in Taiwan—southern versus northern and rural versus urban—I found ample variation among families across regions.

For the Lus, as for each of the families in this research, negotiations over gender and sexuality took shape through the particularities of sex, birth order, social class, counsel received from trusted sources, and everyday ways of relating to kin. My interviews with Coral, Fanyu, and other queer and straight informants provided important data for this analysis. But it was the interactions at unpredictable moments—piled into a van, driving to Carrefour; running into a cousin in a crowded night market; walking in the park with an elderly parent and children’s happy interruptions—that added the texture and depth I have tried to convey in a small measure.

Between August 2011 and January 2013, I conducted ethnographic fieldwork and life history interviews with 80 queer and trans people and heterosexual family members throughout Taiwan. I interviewed people ranging in age from their twenties to their seventies, with experiences spanning a period of profound social and family change in Taiwan. I also looked across cohorts within families. Many people lived or had grown up in multigenerational households, and their cross-generational relationships were microcosms of larger changes taking place in society. Sometimes this created frustration as people struggled to communicate with family members whose cultural reference points clashed with their own. But very few people walked away from these relationships. By choice, duty, necessity, or a combination of these, families retained a central place in people’s minds and often in their daily lives.

The themes that I explore are based on people’s thoughts, actions, and choices about how best to arrange and maintain their family relationships and ways that these choices are enabled and constrained. At its heart, the book is about family change and continuity as a gendered phenomenon. I focus especially on emerging and enduring ideas about parenthood, intergenerational care, and the gendered division of family work and resources. As family life in Taiwan changes rapidly—as, for example, families grow smaller, the cost of living rises, and new ideas about child development are popularized—so too do the tools available to families to make sense of gender and sexual diversity.

Data like mine ages very quickly; in the last six years, things have continued to change. I hope that the book sparks additional questions and exploration of this topic. There are now many scholars writing about queer and trans family issues in Taiwan, including many graduate students, and the future of the field is bright. The hardest part of writing a book is letting it go. It helps to remember that the book is not the end but the beginning of a conversation.

Amy Brainer is an assistant professor of women’s & gender studies and sociology and coordinator of the LGBTQ studies certificate program at the University of Michigan-Dearborn. This blog post includes an abbreviated story from the opening chapter of my book, Queer Kinship and Family Change in Taiwan. The book is a part of the Families in Focus series at Rutgers University Press. Credit: Cover art by Dafne KaDai Chan

Gender, Women and Buddhism in Taiwan
Dear Ex: A Return to Family Melodrama