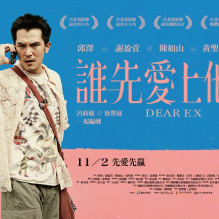 The 2018 Golden Horse Awards had the international film circuit and critics open-mouthed with two highly publicised dramatic events. First, the tensions sparked by speeches made by a Taiwanese awardee and a Chinese laureate that stemmed from longstanding political divisions between their two polities. Second, the winning of the Best Feature Film by An Elephant Sitting Still (大象席地而坐) – the debut (and sadly, final) feature of the young Chinese director, Hu Bo (胡波), who ended his own life at age 29.

Amidst the frenzy that surrounded these two events, the films themselves were understandably, yet regrettably, overshadowed by the media spectacle. What caught my attention, though, is the small but noticeable presence of LGBT-themed films, including the Hong Kong film Tracey (翠絲), which centres on a married man who rediscovers and struggles with his transgender self; and Dear Ex (誰先愛上他的), the only entry from Taiwan shortlisted for Best Feature Film.

Of course, one cannot help noticing the timeliness of these films: a public referendum in November 2018 initiated by the Coalition for the Happiness of our Next Generation (下一代幸福聯盟) saw a result against legalising same-sex marriage in Taiwan – an event that devastated the hopes of countless LGBT couples and their supporters.

Given the close ties between the medium of cinema and Sinophone queer cultures (the term tongzhi 同志, which is the common appellation for the Chinese-speaking LGBT community, was popularised by the Hong Kong Lesbian and Gay Film Festival during the early 1990s), it seems high time to rethink this turn of events in tandem with the development of LGBT-themed films in Taiwan – itself an exciting arena that deserves more extensive study. For the sake of clarity I have decided to employ the relatively more neutral ‘LGBT film’ throughout this article, but the complexity and varying degrees of contextual significance attached to many existing terms such as queer cinema (or New Queer Chinese Cinema) and tongzhi cinema should not be overlooked.

The 1990s were in many ways the spring of LGBT culture in Taiwan. Women zhijian (我們之間), the first public homosexual (lesbian) activist group was founded in 1990 and four years later Chu T’ien-wen’s (朱天文) novel Notes of a Desolate Man (Huangren shouji 荒人手記) won the China Times Literary Award, paving the way for queer fiction as an established literary genre in Taiwan. While there certainly existed LGBT films before this period – for instance Yu Kan-ping’s (虞戡平) 1986 film Crystal Boys (孽子) adapted from Pai Hsien-yung’s (白先勇) now canonical novel of the same name (1983) – it was probably Ang Lee’s (李安) The Wedding Banquet (喜宴, 1993) that heralded and brought LGBT issues to the forefront of popular consciousness. The family melodrama, which depicts a homosexual son’s attempt to placate his parents by staging a marriage of convenience with a woman, proved to be a success both critically and commercially. Thereafter, LGBT film gradually earned its place within the lexicon of Taiwan cinema, in which the steady output of queer films by auteurs such as Tsai Ming-liang (蔡明亮) and Zero Chou (周美玲) contributed further to the sustainability of the genre. Interestingly, the new millennium then saw the emergence of a queer youth cinema – for instance Blue Gate Crossing 藍色大門 (2002), Eternal Summer 盛夏光年 (2006) and the more recent Girlfriend, Boyfriend 女朋友。男朋友 (2012). These films typically addressed the liminal sexualities of adolescents in high school settings in a way that confounded the binary of heteronormativity and homosexuality. While Tsai and Chou still focus on family as a foundational (oppositional) element of Asian queer culture – a theme that is almost ubiquitous in East Asian LGBT films – these youth films seemed to pay no heed to the looming heteropatriarchy as the youngsters appeared (more or less) free to roam the pure realm of desire, unbound by the politicised sexual identities prescribed by adults.

Whether this was a sign of disillusionment with on-going queer politics or simply part of a larger tendency in sync with the youth culture of East Asia needs to be seen in conjunction with the full trajectory of the LGBT movement in Taiwan, yet the institution of family remains the all-powerful figure that opposes, conditions and defines the LGBT culture of Taiwan as a dialectic force. Hence it is extremely telling that the referendum organised by anti-gay marriage groups is titled Ai Jia (愛家, literally Love Home or Love Family), which fully reflects the centrality of family within the discourse of the LGBT movement in Taiwan as a dialectic force.

The film Dear Ex has thus arrived at an opportune moment – a time in which seemingly anachronistic values have come back to haunt the present. Co-directed by veteran scriptwriter Mag Hsu (徐譽庭) and music video director Hsu Chih-yen (許智彥), Dear Ex is the story of a woman, San-lien, who finds herself confronting her late husband Cheng-yuan’s male lover Jay, who is the sole insurance beneficiary of Cheng-yuan. Told primarily from the perspective of Ch’eng-hsi, the teenage son of San-lien and Cheng-yuan, the film revolves around an ideological clash between the heterosexual family (represented by the wife San-lien) and queerness (represented by the homosexual Jay) and the eventual reconciliation between the two. This dynamic is not unlike The Wedding Banquet in which the conflict between the son’s liberal gay values and the parents’ traditional heterosexual values are resolved in a comedic manner.

What is interesting about Dear Ex, however, is that the film chooses not to focus on the epicentre of conflicts, Cheng-yuan, but rather on the aftermath: the male and female ‘widows’ of the gay family man. We are never given access to Cheng-yuan’s inner turmoil, apart from a brief flashback in San-lien’s memory, as he wavers between his family obligations as husband and father as well as his homosexual love for Jay. In this respect, the personal, private struggle seems to give way to a social, public conflict that resituates the family as the overarching element in Taiwan’s queer politics. Also, it is worth noting that the son Ch’eng-hsi initially held a grudge against both Jay (for stealing his father) and his mother (for her over-controlling demeanour) before, ultimately, reconciling with the two. The teenager’s hostility to both homosexuality and heteronormativity somehow calls into question the boy’s own brewing sexuality, which is perhaps an indirect reference to the queer youth cinema of earlier years which was characterised by a sense of sexual indeterminacy.

With Dear Ex being the latest addition to a growing body of LGBT films in Taiwan, it will be interesting to see how it might precipitate and open up further potential for Taiwanese LGBT films. Needless to say, I am very positive about the future development of this important and innovative film genre.