The real significance of the Vietnam-Cambodia relationship 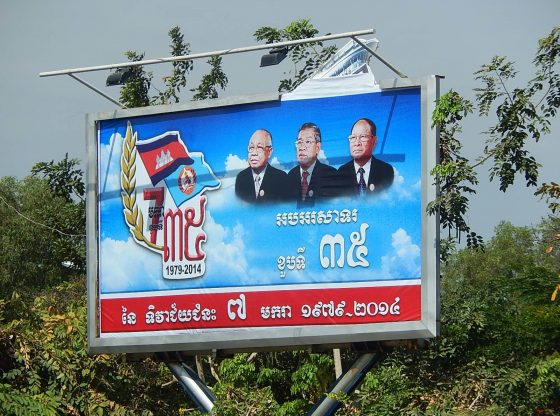 Vietnamese President Nguyen Phu Trong is scheduled to visit Cambodia later this month in his second overseas trip in office. His visit is being seen as a reiteration of Vietnam’s policy to view Cambodia as an important strategic neighbour, with which Vietnam shares many common interests and regional concerns.

Cambodia and Vietnam established diplomatic relations in 1967. Eight years later, the relationship between the two countries saw its worst chapter when the brutal Khmer Rouge took power in Cambodia. Bloody border clashes were fought up until 1979. In January 2019, Cambodia celebrated the fortieth anniversary of the ousting of the Khmer Rouge, aided by Vietnamese troops. Long-standing Cambodian Prime Minister Hun Sen hailed the day as Cambodia’s ‘second birthday’ and thanked Vietnam for saving the country, reinforcing Vietnam’s position as the ‘old friend’ of Cambodia.

Linkages between the two countries seem to expand to all areas beyond political and security aspects, where Vietnam’s influence can already be keenly felt.

Although Cambodia has tilted towards China economically in recent years, the strong relationship between Vietnam and Cambodia has seemingly endured, with frequent official visits on a wide range of topics highlighting the push for cooperation. In December 2018, Prime Minister Hun Sen visited Vietnam for three days to make agreements on transportation, border trade and the fight against artefact smuggling.

In the same month, Vietnam’s Defence Minister Ngo Xuan Lich paid an official visit to Cambodia for discussions on defence cooperation, ranging from military information dissemination to the repatriation of Vietnamese soldiers’ remains from Cambodia. Then in January 2019, Vietnamese National Assembly Chairwoman Nguyen Thi Kim Ngan met with Cambodian leaders on the sidelines of the 27th Annual Meeting of the Asia-Pacific Parliamentary Forum (APPF-27) to enhance further border collaboration.

Once communist allies, these days Vietnam and Cambodia find themselves more closely attached through economic relations. Bilateral economic ties between the countries have been expanding dramatically in the last few years, and Vietnam is now Cambodia’s fourth largest trading partner. In 2017, the volume of bilateral trade reached US$3.8 billion, an increase of 25 per cent over the previous year. In 2018, the figure rose to nearly US$4.7 billion, up a further 24 per cent, and it is projected to reach US$5 billion in 2020.

The two countries also have a blueprint for promoting border trade with the planned construction of 116 warehouses along the border crossings of Vietnam, Cambodia and Laos, highlighting the scope for growth in this trading relationship. As of 2018, Vietnam was among the top five investors in Cambodia, with cumulative registered investments of approximately US$3 billion. Metfone, a telecommunications company backed by Vietnam’s Viettel group, was assessed to be the most valuable brand in Cambodia in 2016. In addition, Vietnamese tourists made up the second largest proportion of inbound arrivals in Cambodia in 2017, only behind China.

Aid in various forms is also an important factor in bilateral ties. In 2017, Vietnam agreed to fund the construction of an administrative building inside the Cambodian National Assembly as a US$25 million gift. In 2018 alone, Vietnam offered 930 scholarships to Cambodian nationals for both degree and non-degree programmes in different training areas. In addition, Vietnam also opened high-quality Vietnamese hospitals and schools in the capital city of Phnom Penh.

Linkages between the two countries seem to expand to all areas beyond political and security aspects, where Vietnam’s influence can already be keenly felt. Nevertheless, this does not mean that all complexities of the ties between these two neighbouring countries have simply disappeared. Cambodia is the only country with which Vietnam has not yet finalised border demarcation, while Vietnam completed border delimitation with China and Laos in 2009 and 2013, respectively.

When Vietnamese Prime Minister Nguyen Xuan Phuc met with Cambodian Prime Minister Hun Sen in December 2018, both sides agreed to speed up the border demarcation process, which has already completed 84 per cent of the 700-mile border line. Last month, the 10th meeting on cooperation and development of border provinces between Vietnam and Cambodia was convened to promote border security ties and the upgrading of border checkpoints as well as infrastructure projects and further cooperation. Hanoi obviously does not want to see the border issue become exploited by anti-Vietnamese nationalists and therefore wants to settle it as soon as possible.

As long as the border issue remains unresolved, it will continue to be a lingering problem for Hun Sen. His critics maintain that the government has been too concessionary during the period of border negotiations, and they have attempted to cultivate nationalist, anti-Vietnamese sentiment in order to gain public support. The dissolved Cambodia National Rescue Party (CNRP), which is led in exile by Sam Rainsy, has clung to anti-Vietnamese rhetoric by labelling Hun Sen Hanoi’s ‘puppet’.

While Rainsy may well benefit from the support of hardline Cambodian nationalists, such fringe sentiment is unlikely to impact on the ongoing border demarcation process or put the bilateral relationship under too much strain. Completion of the border delimitation will strip the opposition parties and Hun Sen’s opponents of their political tool to criticise him, and bilateral relations will be strengthened further when their nationalist rhetoric fades away. All this indicates that a stable, prosperous Cambodia is always in Vietnam’s interests.

Dr Nguyen Thanh Trung is Director of the Centre for International Studies (SCIS) in the University of Social Sciences and Humanities at Vietnam National University – Ho Chi Minh City.

Dear Ex: A Return to Family Melodrama
Rights of transition: The Khmer Rouge Tribunal in Cambodia