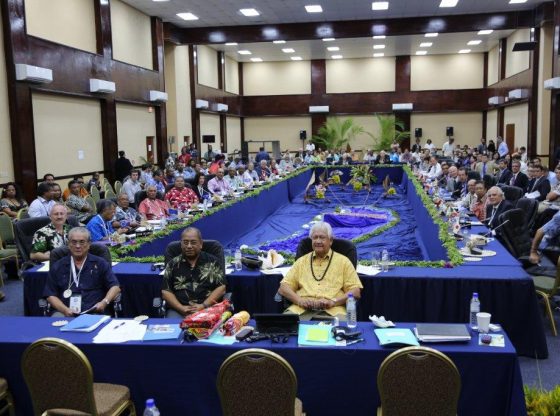 ‘I reject the terms of the dilemma which presents the Pacific with a choice between a China alternative and our traditional partners. Unfortunately, this framing remains the dominant narrative in the public debate about our region in the context of today’s geostrategic competition.’ These were the words of Dame Meg Taylor, Secretary General of the Pacific Islands Forum (PIF), speaking on 8 February 2019 in Port Vila, Vanuatu.

At the same event, convened to discuss the changing geopolitics of the region, Vanuatu’s Foreign Minister, Ralph Regenvanu, said the Pacific Island nations were tired of being treated as ‘pawns’ by larger powers.

Last year, the minister had his own less-than-pleasant experience of being treated as a pawn by Australia’s flagship current affairs/entertainment programme, 60 Minutes. In an episode which focused on a report that the People’s Republic of China (PRC) had approached the Vanuatu government to build a naval base in its second-largest port of Luganville, the minister was accused of engaging in ‘bribery’ because he was open to trading development assistance in exchange for supporting China in international forums. There was no follow-up story to support the claims of a military base, but the news was nonetheless reported widely.

This is not to say a PRC base of some sort in the Pacific (whether for satellite tracking or ship repair and support) is impossible, nor that companies such as Huawei would not look to score political points in China by building strategic infrastructure in the Pacific, such as undersea cables. But staunchly non-aligned Vanuatu always appeared an unlikely choice.

Australia’s drafting of anti-foreign interference legislation is the major cause of displeasure in Beijing. The pick of the pique saw China’s Ministry of Foreign Affairs declare: ‘If Australia considers exchanges between countries as interference, it should lock itself up in the darkroom.’ The Australian government’s increasingly assertive language about the Pacific as ‘our patch’ probably runs second. A succession of ministers and departments have lined up to declare Australia to be the Pacific’s ‘partner of choice’, reminiscent of an anxious lover.

More florid language was used earlier in 2018 when Australia’s then Minister for International Development and the Pacific, Concetta Fierravanti-Wells, accused China’s aid programme of burdening the Pacific with debt through ‘useless buildings’ and ‘roads to nowhere’. Xinhua’s Canberra correspondent wasted no time in observing that ‘Australia’s “default policy” for all issues is to blame China’, going on to describe Australia as an ‘arrogant overlord’ in the Pacific.

To be fair, Fierravanti-Wells is no longer a minister, and there are almost no scenarios where she will be one in the future, but her language – suggesting that naive Pacific leaders were being ‘duchessed’ by Chinese suitors – did little to win Australia friends in the region. As one Vanuatu newspaper put it: ‘These roads are not “roads to nowhere”. They lead to our homes.’

The upside for the Pacific nations is that they are once again in a position to play the large powers off against each other, hopefully getting better deals as a result than they might manage with one or two complacent development partners. A similar situation arose in the 1980s when suspicions focused on Soviet intentions in the South Pacific.

China, unlike the Soviet Union, is in the region for the long haul. Even if China’s economy is dragged down by the weight of its considerable debt burden, new migrants from Fujian and Guangdong, who dominate the retail and wholesale sectors of the Pacific economies, are staying put in their trade stores. And even if Xi Jinping’s signature Belt and Road Initiative (BRI) is wound back, Chinese contractors will continue to seek commercial opportunities in the Pacific’s booming infrastructure sector – booming in part due to the influx of new donors, all of whom find that Chinese infrastructure contractors put in the lowest bids for their aid contracts.

The irony for the Australian government is that its Pacific ‘step up’ was in the planning long before relations with China started to sour, but it has come to be seen as part of a strategy to contain China’s presence in the region. The Global Times is in little doubt: ‘The anxiety and psychological vigilance demonstrated by Australia and some other Western countries toward the positive and constructive relationship between China and the Pacific countries is ridiculous, even pathetic.’

Oddly, New Zealand has been more vocal regarding the strategic anxiety brought on by the changing geopolitics of the Pacific, yet the Global Times rarely expends any effort in scolding its ‘Pacific reset’. If New Zealand were to introduce legislation addressing foreign interference, however, then that would surely change.

The one thing that is likely to bring Australia and China together lies on the other side of the Pacific. Donald Trump and others in the Republican Party are staking out trenchant positions against trade with China that will last long after Trump is gone. Whatever Australia’s leaders may think of China’s political system – six years into Xi Jinping’s rule there can be no illusions left that he wants China to become ‘like us’ – Australia is a trading nation, and China makes up a quarter of Australia’s trade.

From Beijing, there were signs that economic coercion would be applied to bring Australia into line over its foreign interference legislation. China’s embassy in Canberra issued a safety warning to Chinese students shortly after then Prime Minister Malcolm Turnbull rolled out his ‘The Australian people stand up’ [against Chinese influence] line, delivered in intermediate Mandarin.

In the context of a lengthy trade war with the US, however, China needs trading partners. And if economic necessity wins out over security concerns, who knows, Australia and China might then get serious about working together in the Pacific. But both sides would do well to talk to their Pacific partners about what they actually want first.

Graeme Smith is a Fellow with the Department of Pacific Affairs at the Australian National University. He also co-hosts The Little Red Podcast with Louisa Lim. Image Credit: CC by US Embassy/Flickr.

Exploring the Gendered Cultural Politics of Seediq Bale’
What Happened to Taiwan’s Support for Same-Sex Marriage?