Rights of transition: The Khmer Rouge Tribunal in Cambodia 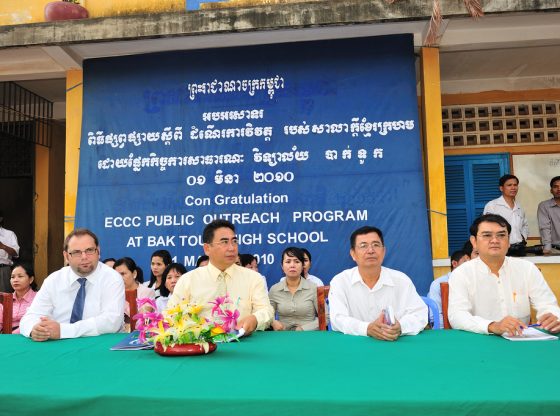 In Cambodia, a major transitional justice initiative known as the Khmer Rouge Tribunal (KRT) is now effectively drawing to a close, twelve years after it was established. With hindsight, it may be said that instead of participating in a hoped-for transition from state repression towards peace, recognition of human rights and the democratic rule of law, the Tribunal has operated as part of Cambodia’s transition towards ever more deeply entrenched authoritarianism and ‘rule by law’.

Surveys have shown that the judiciary is the least trusted institution in Cambodia and there is little evidence that the Extraordinary Chambers in the Courts of Cambodia has altered this.

Transitional justice denotes a range of mechanisms, including criminal trials, truth commissions and lustrations, used to deal with the legacy of mass atrocities in societies emerging from authoritarian rule or conflict towards recognition of victims’ rights and the democratic rule of law.

Since the formal justice systems in post-conflict societies are generally deemed unfit to uphold international standards of due process, various models of international justice have been developed to try the perpetrators of mass crimes. Fully international courts, such as the International Criminal Court for the former Yugoslavia (established in 1993 in The Hague), appeal to international notions of a fair trial. However, this model has been criticised for failing to engage with the affected communities or to involve domestic legal staff so as to strengthen those countries’ own judicial systems.

By the early 2000s, ‘hybrid’ tribunals were therefore being promoted. These meant that international and national legal staff would work side by side, such as on the Special Panels for East Timor (established in 1999), and it was hoped this would provide capacity-building for local staff as well as enabling greater local participation.

In 2006, the Extraordinary Chambers in the Courts of Cambodia (ECCC) was established as a hybrid tribunal to try those accused of being most responsible for crimes against humanity committed during the Khmer Rouge regime from 1975  to 1979.

The first trial began in 2009. The defendant was Kaing Guek Euv (alias ‘Duch’), the former director of the Khmer Rouge interrogation and torture centre in Phnom Penh, S-21. In 2012, Duch was sentenced to life imprisonment for crimes against humanity, as were the former Khmer Rouge leaders Nuon Chea and Khieu Samphan in 2014. The latter were then also found guilty of genocide in 2018.

Among the ECCC’s stated objectives were skills transfer from international to national legal staff. Seeta Scully held that the ECCC would contribute to a ‘culture of the rule of law within its own staff, as well as amongst Cambodian lawyers generally’ and leave a  ‘lasting legacy of the ECCC’s presence long after its doors have closed’.

However, after the first ECCC trial of Duch (which lasted from 2009 to 2012), a survey showed that the proportion of people who believed that officials who commit crimes go unpunished had increased. Patterns of patronage were continuing to steer legal proceedings in the domestic judiciary as well as in the ECCC, and even while legal reform was taking place, powerful Cambodians were using the law to legitimise rather than redress inequities and impunity.

Surveys have shown that the judiciary is the least trusted institution in Cambodia and there is little evidence that the ECCC has altered this. The Cambodian establishment’s growing capacity to draft and implement laws, perhaps partly in response to the ECCC, does not guarantee an independent judiciary.

The justice police, who execute court warrants and rulings, depend on the Ministry of the Interior for their salaries and positions, so they are rarely willing to risk thwarting their superiors’ wishes. Similarly, the members of the Council of the Magistracy, which is supposed to maintain the discipline of lawyers, defer to the ruling Cambodian People’s Party (CPP).

Elite patrons can therefore continue to exert pressure to secure legal immunity for themselves or their networks (known as kse, or ‘string’), oversee politically motivated prosecutions, and perpetrate human rights abuses with impunity. Poorer victims of crime find that without money, a powerful backer (khnang) or connections, they have little chance in the court system.

The story of the ECCC is now spurring scholars such as Rebecca Gidley to ask whether transitional justice may be ‘illiberal’: might it inadvertently further rather than weaken state coercion and impunity?

As long ago as 1993 and the UN-supervised general elections, the evolution of democratic principles in Cambodia had been stymied by various groups vying for power. The Khmer Rouge boycotted the 1993 elections, and under Hun Sen’s leadership the CPP refused to accept its electoral defeat by the Royalist FUNCINPEC party. The then King Sihanouk brokered a power-sharing arrangement between the two parties to keep the peace. However, violence broke out in 1997 between factions loyal to these parties and the CPP emerged victorious. Hun Sen has remained in power ever since.

The CPP then went on to rule using a mixture of menaces, handouts and neo-patrimonialism. However, an unexpected show of strength for the opposition coalition in the 2013 general elections and the 2017 communal elections took the CPP by surprise. This, together with shifts in global geopolitics and growing Chinese support for Cambodia, roused the CPP to redouble its efforts to maintain control of the political scene.

In the lead-up to the 2018 elections, while the ECCC continued to operate on the outskirts of Phnom Penh, the Supreme Court in the city centre outlawed the major opposition party, and the Phnom Penh Municipal Court sentenced its leader to imprisonment for treason and espionage. Some of the legal staff involved were simultaneously working at the ECCC.

Various media and civil society organisations suffered a similar fate, provoking a widespread outcry that this use of the courtroom to criminalise political opposition and civil society marked the death of democracy in Cambodia.

While acknowledging the ECCC’s success in yielding a rich and valuable historical record, Peter Maguire nevertheless asks: ‘Did the ECCC help end impunity in the public consciousness?’  And did the court ‘help Cambodia transition to a better place?’ He concludes: ‘Absolutely not. During the course of the Khmer Rouge war crimes tribunal, Cambodia imprisoned opposition leader Kem Sokha, killed a once vibrant free press, and became a one-party state’.

In response to the worsening human rights situation, the European Union, a major sponsor of the ECCC, announced in February 2019 that it was starting the process that may lead to suspension of its ‘Everything But Arms’ preferential trade scheme for Cambodia.

The above calls into question the assumption that transitional justice mechanisms necessarily accompany a transition from authoritarianism towards the ideals of liberal democracy and the end of impunity. Paradoxically, it seems that the ECCC may instead have accompanied a transition in Cambodia from what Alice Beban and Laura Schoenberger describe as ‘populist authoritarianism’ towards ‘naked authoritarianism’.

Alexandra Kent is a researcher at the Gothenburg Research Institute, specialising in South- and Southeast Asian affairs. She is currently undertaking a study entitled ‘Shaping Justice? The Khmer Rouge Tribunal’s Influence on Expectations and Experiences of Justice in Cambodia’.