Is this the “China Dream”? 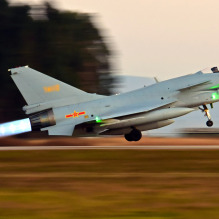 On 5 February 2019, Hong Kong’s South China Morning Post (SCMP) published an article entitled “PLA bombers, jet fighters in Beijing’s ‘Happy Lunar New Year’ video message to Taiwan” and provided a link to the film itself, titled “My Fighting Eagles Fly Around Formosa.” According to the SCMP, this three-and-a-half minute video was released on Weibo, a popular social media platform in China, by the PLA Air Force Airborne Corps on Sunday (3 February) with a note saying it was to celebrate the New Year.

The film starts by displaying beautiful scenes of what appears to be Taiwan’s mountains, lakes and rivers, and ocean waters surrounding its islands. It also includes shots of children playing in the water and on beaches, grandparents celebrating with their family at home, shoppers and others strolling on crowded city streets, and the iconic Taipei 101 skyscraper. At the same time, interspersed throughout the film were images of Chinese bombers and fighters flying in formation and doing maneuvers among white clouds and in clear blue skies, taking off and landing, and young pilots in uniform marching around their aircrafts. The lyrics of the catchy music accompanying these images sing of “my fighting eagles flying around Formosa softly calling on brothers and sisters to return.”

…how will China’s neighbours, such as Japan, Vietnam or the Philippines, view this video? If, as it suggests, the Chinese government is willing to use force against its own “brothers and sisters” in Taiwan, what would it be willing to do to its non-ethnic Han neighbours…

In watching this video several times, I still find it hard to understand its intent and targeted audience. Is it trying to persuade Taiwan’s “brothers and sisters” portrayed in the film to return? Did the video producers, and the Chinese government, really believe that this film would actually win over the hearts and mind of the people of Taiwan to the prospect of reunification? Having worked and lived in Taiwan for many years, I cannot imagine that even my most ardent friends in the Kuomintang (KMT) would see this video as attractive and persuasive to them and their supporters, much less my friends in the Democratic Progressive Party (DPP). If the Chinese government considers this video to be an effective propaganda tool, it only shows to me how very much detached they are from the reality of Taiwan and its people today.

Insofar as the video was released on Weibo, it may be that the intended audience is actually the Chinese public, especially those exuberant nationalists on the internet. Here, the intent may be to build up patriotism and strengthen support for the government, especially in the wake of increasing doubts about the current economy. At the same time, one wonders if the general public would welcome military threats and perhaps even attacks on their civilian “brothers and sisters” across the Strait? This seems to be what the film implies, even if juxtaposed with beautiful scenery and soft music. Having worked and lived in China for over a decade spanning 30 years, I doubt that my many friends on the mainland would welcome such a scenario, however much they favor reunification. If I’m wrong, it would suggest an even wider cross-Strait gap than I had thought and would confirm the worst fears of the Taiwan people about the prospect of reunification with their “brothers and sisters” across the Strait.

Well, then, is the film also meant for a global audience, for example, the United States? Speaking as an American, as well as a former US diplomat who had worked and lived in Asia for over 30 years, this video underscores vividly the continued relevance and significance of US commitment to Taiwan under the Taiwan Relations Act (TRA). It dramatically pronounces not only the unwillingness of China to renounce the use of force against Taiwan but its increasing willingness to resort to coercive measures which the TRA was and is still designed to deter and counter.

For years, many have argued that the US government should not provoke Beijing into “squeezing” Taiwan, and should try to help maintain the status quo, by not going too far in our expressed support for Taiwan. It would appear today that such an approach has not been very effective, as China has continued to build up its military power and to escalate the threat against a peaceful and democratic Taiwan that has maintained the status quo. China’s actions should not come as a surprise, however, since Beijing’s long-stated goal is ultimately to change the status quo and reclaim Taiwan, even if it requires the use of force. More generally, this video lends credence to the increasingly prevalent view in the United States that China’s rise will not be a peaceful one for the region, and certainly not for Taiwan. This video will likely convince more Americans, especially in Congress, to affirm US commitments by increasing political and military support for Taiwan in the face of Beijing’s coercion.

And how will China’s neighbours, such as Japan, Vietnam or the Philippines, view this video? If, as it suggests, the Chinese government is willing to use force against its own “brothers and sisters” in Taiwan, what would it be willing to do to its non-ethnic Han neighbours, or its own ethnic minorities for that matter, who have differences that conflict with China’s self-declared core interests? It may be that Beijing will succeed in intimidating them by the use or show of force, but can China really afford a major conflict at this stage in its development without serious domestic repercussions? In any case, what this video will do is to enhance the perception of an aggressive and threatening China on the rise.

So, given the above, I just don’t understand how the Chinese government could believe that this Air Force video, as well as its recent military activities, are actually advancing the goal of Taiwan’s reunification. What I’m more concerned about, however, is how this video may in fact reflect the mindset and values of current Chinese leaders who are bent on realising the “China Dream” as its power expands. For decades, China has largely ignored or evaded international trade rules and free market norms, arguing that it is still a developing country. China has continued to exercise and now even tightened one-party rule arguing that democracy and human rights are Western concepts and not part of traditional Chinese culture, even as Taiwan has evolved into a vibrant democracy over the past 20 years. I’m afraid that unless Chinese leaders see a serious cost to pursuing such policies, they will not see a need to alter what seems to have been a very successful policy for the country, at least in the near term. And unless there is determined and concrete push-back – not just another new set of dialogues – from the US and other like-minded members of the international community today, the risks of greater confrontation, instability and even war will rise in the coming years.

Robert S. Wang is a Senior Associate with the Center for Strategic and International Studies (CSIS) and an adjunct professor at the Georgetown University School of Foreign Service (SFS). He was a career Foreign Service Officer in the U.S. Department of State from 1984-2016. Image credit: CC by rhk 111/Flickr