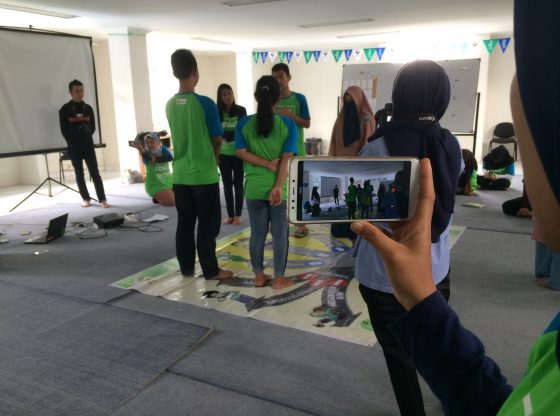 Tolerance in majority Muslim Indonesia is associated, among other things, with the national motto ‘unity in diversity’, state-recognised religious pluralism, and the freedom to profess one’s faith, as long as this does not interfere with the matters of other faiths.

This inclination has been described by observers as ‘communal tolerance’. Where this freedom is limited, either due to discriminatory regulations or by blocking the building of sites of worship and violently dispersing religious congregations, representatives of Indonesia’s major religions have initiated forums of inter-religious dialogue to counter practices of intolerance and radicalism.

Interfaith dialogue has been pursued by intellectuals and religious leaders since long before Indonesia’s democratic transition began in 1998. However, as many have observed, this dialogue rarely trickled down to the streets and kampungs (urban neighbourhoods) where the actual outbursts of religious intolerance took place.

In the majority Muslim province of West Java, intolerance scores among the highest in Indonesia according to the findings of several national research institutes based in the capital city of Jakarta, such as the Wahid Institute, which is named after Indonesia’s third president, Islamic thinker, and proponent of inter-religious dialogue, Abdurrahman Wahid.

These institutes have made it their task to promote the values of tolerance and peace, not only by publicly condemning the persecution of religious minorities, but also by strengthening friendly relations in religiously mixed neighbourhoods – recognising that tolerance begins at the level of everyday social interactions, like sharing the same classroom or working in the same project.

Some of the fruits of their work and local collaborations are becoming increasingly visible in the numerous communities and activities that have emerged in the past decade. In the city of Bandung in particular – West Java’s educational and technological hub – the peace movement has been carried by groups, activities and events such as Peace Generation, Peace Camps, Bandung’s Peace School, Peace Train, etc. Together they target Bandung’s younger generation, who are depicted as ‘agents of change’ or ‘agents of peace’, and thus aim at instilling values of tolerance in a future civil society.

While freedom of thought and expression have been widely celebrated in the post-Suharto era, social media have also highlighted the far-reaching consequences of this freedom, including the pluralisation of religious authority, the polarisation of society, and the boom in fake news. Widespread concerns have been voiced in the national and local media about the potential of these platforms to break the nation apart. Ahead of the upcoming presidential elections in April 2019, these alarming developments have spurred increased investments in the media literacy of the so-called ‘millennial’ population.

In August 2018, current president Joko Widodo’s ‘ambassadors’ initiated a programme called ‘Indonesia Bijak’ or ‘Wise Indonesia’ that targeted eighteen cities across Indonesia. In mid-August, a three-day camp took place in Lembang on Bandung’s northern outskirts, where 80 university students and young activists learned how to differentiate hoax from authorised news and how to create ‘positive’ online content just by using their mobile phones.

WhatsApp groups become the first site of reference when it comes to verifying news or seeking information or opinions.

The workshop participants were recruited by targeting the leaders of campus-based religious and activist communities who subsequently spread the online announcement and application form in their respective WhatsApp groups. The movement’s hope was to tap into existing community networks and broaden their capacity for collaboration. Although the event succeeded in producing a number of moving videos, which were later uploaded on YouTube, it failed to bring about joint follow-up activities in the respective communities.

Why do progressive endeavours to counter rising discrimination through online counter-narratives and ‘positive content’ encounter so little enthusiasm and engagement among local communities?

There are several factors which lie behind this. One is the detachment of such campaigns from the actual physical realities and concerns of activists in Bandung. While such events and the online campaigns they produce are experienced as something ephemeral, the social media use of ‘peace communities’ appears to be rather ordinary and uncomplicated, following the lines of close socialities and interwoven relations that form the basis of their movement.

Several observers have pointed to the importance of personal connections and informal personal networks in Indonesians’ everyday life. In West Java’s educational centres, people already start building their networks at high school, and they maintain these relationships over the years through regular meetings and silaturahmi events. Others build close relationships around mosque activities or regular neighbourhood meetings, also called arisan. These contacts are then re-activated in so-called komunitas, or groups of people gathered around a shared concern. Oftentimes group members claim close friendships that reach back to elementary school.

Social media have largely contributed to reviving these contacts, but it is mainly social messaging applications like WhatsApp that sustain continuous group communication over time and space. This is the reason why every group and every event runs at least one if not several WhatsApp groups for different purposes. Through these groups members share announcements, discuss future meetings, share photographs, stories and videos, etc., and in so doing they nurture the group identity.

By extending face-to-face socialities through all the possibilities social media can offer, this contributes to building a sense of group belonging, solidarity and mutual engagement. This is true regardless of whether we speak of activist communities or more exclusivist groups. It is the quality of these relations that defines the scale of their outreach, both offline and online.

This explains why communities that engage with (religious) minorities attach greater importance to close group relations and invest time and effort in maintaining personal networks online, while they rarely engage in online campaigns prioritised by centralised institutions which expect to find the remedy for all social malice within a positive narrative of ‘unity in diversity’. The question is, can such mundane yet continuous engagement in social media groups produce an effective public stance against intolerance?

To answer this question, one needs to think beyond online discourses or what people post on their timelines. WhatsApp groups become the first site of reference when it comes to verifying news or seeking information or opinion. These are the sites of vivid discussion on controversial issues. As such, social media groups do more than just shape opinion. They sustain an extended social network that nurtures agency through connections that might be used when it comes to defending interests, or making a request at an official level, or seizing one’s right to vote, particularly for those who cannot leave the city to vote in their hometown.

In sustaining social networks, social media add to an unexplored potential to bolster citizens’ agency. This is why the peace communities’ appeal among Bandung’s young generation continues to grow, forming a well-informed, eloquent and thick network of resistance against practices of intolerance and their intricate roots. Thus, rather than speaking out or making a cause, spreading the ‘virus of peace’ might in reality entail socialising in the right groups.

Dayana Lengauer is recipient of the Doctoral Fellowship of the Austrian Academy of Sciences at the Institute for Social Anthropology and PhD student at the University of Vienna. Her research focuses on emerging practices and socialities among highly mediated groups of predominantly young people in Bandung, Indonesia, who strive to espouse values of peace, tolerance and justice in increasingly socially and politically polarised environments. Image credit CC to the author.