BJP and the politics of polarisation: Agenda for the 2019 elections

Home /Elections, India, IndiaVotes2019/BJP and the politics of polarisation: Agenda for the 2019 elections 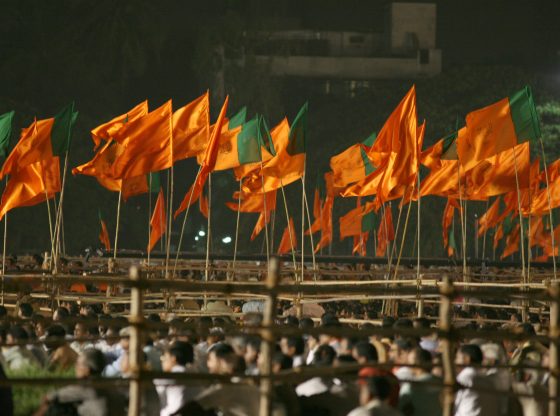 The manufactured mandate of 2014 was based on the agenda of ‘development for all’. Narendra Modi projected himself as the ‘development man’ and his contentious role in presiding over one of the worst massacres of modern India was conveniently side-lined. With few exceptions, all media channels – whether electronic, print or digital – fell over themselves to sing paeans to Modi. One popular notion was that every Indian would receive 15 lakhs in their bank account as the black money stashed abroad was brought back into the economy.

Gradually, however, the tide turned. The development project ran into a few roadblocks while protecting the divine bovine, the flogging of Dalits in Una, and the demonising and lynching of Muslim minorities. Demonetisation, under the guise of removing black money, ended up penalising the poor, and the Goods and Services Tax (GST) burdened small traders and the common man.  Increasingly, the bogey of nationalism is played up to silence any cover-up of the undemocratic public culture. The chief contribution can be seen in the arena of name changing, whether of roads, railway stations, cities or already existing development schemes.

The lines separating the government and the nation are increasingly becoming blurred, and any disagreement with the ruling party is considered an attack on the legitimacy of the nation.

The insidious agenda of the ruling party and its ideologues – the Rashtriya Swayamsevek Sangh (RSS) – is also being experienced more and more by academic institutions. Any minor disagreement on campus is blown out of proportion by a pliant media, and the tentacles of the ruling party swing down to throttle any dissent. This was witnessed in the Jawaharlal Nehru University (JNU) row over nationalism, where even after three years no charge-sheet has been filed. A JNU student, Najeeb Ahmed, is yet to be traced after a scuffle with a member of Akhil Bhartiya Vidyarthi Parishad (ABVP), the student wing of the Sangh Parivar.

Similarly, Hyderabad University campus also went through turbulent times when, after a fracas with ABVP, activists of the Ambedkar Students Association (ASA) were debarred from the campus. Ultimately, it resulted in the institutional murder of Rohith Vemula (a promising research scholar whose suicide note provoked intense debates in Indian academia), who had dreamt of being a Carl Sagan. The battle to win over the academic spaces continues with the latest coining of a new term – ‘Urban Naxal’* – for any form of ideological opposition to the party in power.

It is evident that there is a blatant disregard for any form of institutional autonomy and that constitutional safeguards, especially those to foster social justice, have been deliberately undermined. The rush to implement the Citizenship Bill despite vociferous protests in Northeast India, the dilution of the SC/ST Atrocities Act, abolition of the 200-point roster for recruitment and lack of enforcement of the 10 per cent reservation for economically weaker sections of society, Supreme Court judgements which go against all tenets of natural justice and the struggle of tribal communities to reclaim their land, forests and water: together, these all amount to gross human rights violations and the breakdown of constitutional morality.

On 30 January 2019, the Akhil Bharat Hindu Mahasabha celebrated the death anniversary of Mahatma Gandhi and gave a position of martyrdom to Nathuram Godse, the man who killed Gandhi, which they consider as a ‘heroic’ act.

The burning of the Constitution hardly evoked any reaction by the Sangh Parivar. The government is running scared of any economic and development surveys, and calls such questions ‘Western conspiracies’. The worst victims of ‘Modinomics’ are Dalits, Muslims, farmers and tribals. In a bid to portray a humane face, Modi washed the feet of manual scavengers whom he had valorised as karmayogis at the on-going Kumbh Mela.

For a security-obsessed state, the only category of people worth cultivating is the armed forces, with the result that there is a breakdown of civilian dialogue in Jammu and Kashmir, Northeast India and the Naxal-affected areas. The Pulwama incident was a godsend opportunity to the warmongers, as it would erase their failings from public memory. However, Pakistani diplomacy helped to diffuse the tensions.

The score sheet of the past five years amounts to many catchy slogans but an absolute distrust of the common person, increased hatred, and the growth of a personality cult. Ironically, while a programme called Beti Bachao, Beti Padhao (designed to create awareness around female foeticide and girl child education) speaks of educating the girl child, anti-Romeo squads are promoted to thwart any expression of female agency.

The heinous cover-up in the Kathua rape and murder case is a shameful indictment of the politics of hate and political opportunism. There is no channel of communication between the state and its citizens. While the former pronounces on various issues, even following and celebrating people accused of lynching on social media, it maintains a silence when it comes to condemning such incidents. The coming months will witness a struggle between the Constitution of B.R. Ambedkar and Savarkar’s Hindutva fascism. The widely expressed fear is the eruption of communal violence to consolidate vote-banks for political victories.

The lines separating the government and the nation are increasingly becoming blurred, and any disagreement with the ruling party is considered an attack on the legitimacy of the nation. This is reflected in the political debates, and opposition parties are ridiculed for forming electoral alliances. The rhetoric of development has failed miserably, and the last resort for the BJP to gain electoral dividends is the politics of polarisation based on caste, community, region and ideology.

There is increasing surveillance of the common man and woman. However, there is also a gradual backlash against such a divisive agenda. The regional elections in Chhattisgarh, Madhya Pradesh and Rajasthan reflected the shift in the mandate, where brand Modi was rejected by the people and there occurred a political resurgence of the Congress party. There is intense churning amongst the people and a feeling that a paradigm shift is required to cleanse the communal politics and usher in an era with a secular, democratic ethos. This has forced many political arch-rivals to negotiate for consensus and coalition ahead of the elections in 2019.

From treatment to prevention: The role of workplace psychoeducation for mental health in China
The Hanoi Summit: Ruined by over-ambitious hard bargaining?