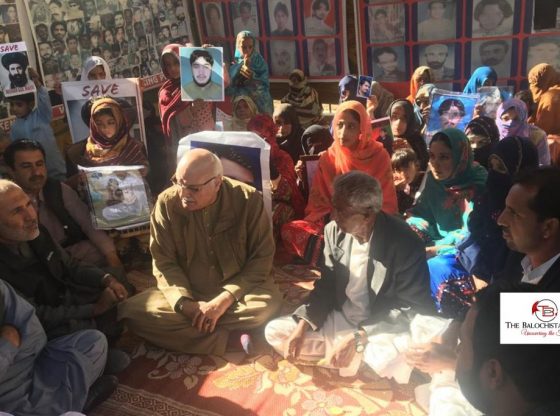 There has recently been an upsurge in protests against the state-sponsored crime of enforced disappearances of people of Balochistan and Pashtuns in Pakistan. This is welcome, as there is no closure for those whose loved ones have gone missing. However, the question remains, will this upsurge help the missing to return and curb the continuing enforced disappearances? It would appear that it is of no help at all. At least, not for those Baloch people who are being abducted with impunity, even from the universities.

If the Baloch give up their politics for fear of opprobrium, this would represent a great injustice to the Baloch people – who want a life of peace and dignity – and an even greater injustice to those who have died or who continue to suffer for these rights.

The movement named the Pashtun Long March, which was started after the killing of Naqeebullah Mehsud in Karachi and later became The Pashtun Tahafuz Movement (PTM), held a meeting in Quetta a few days back. Unsurprisingly, the meeting was well attended by the Baloch and Hazaras leaders of Balochistan because they have also long been victims of state and sectarian terror.

The solidarity between the victims could and should be a sign of hope and a source of strength for all of them. This unity, however, shouldn’t be for just one event which, although applauded for a while, is then gradually forgotten without anything useful coming from it. There has to be a well-thought-out approach to the unity as well as consistent and systematic support for each other, for without this, the initial enthusiasm will fizzle out and no one will gain except the state, which is responsible for the plight of the Baloch, Pashtuns and Hazaras.

Currently this solidarity is based on the humanitarian issue of the missing persons, and this is welcome. However, in order for it to be of any consequence, there has to be clarity about the cooperation and it has to take a political form as well. Only unity on a political basis will be of any help to those affected, since otherwise this will remain no more than social cooperation and may peter out over time.

The Baloch will find it easy to support the Pashtuns in their demands for the return of the internally displaced persons (IDPs), the end of collective punishments, the end of check points in the Federally Administered Tribal Areas (FATA), an end to the security forces’ highhandedness, and an end to state support for the Taliban – which has led to the situation faced by those in FATA, Swat and other areas today.

The Pashtuns, for their part, will have to support the Baloch in their struggle for rights over their resources and coast (i.e. the Gwadar Sea Port) as well as their politics for securing Balochistan’s interests in the China-Pakistan Economic Corridor (CPEC). It is interesting that previously the PTM was not considered to be anti-state and it was called a struggle for constitutionalism and fundamental rights, while in contrast the Baloch struggle has always been considered as being anti-state and foreign-funded. Now the same fate has befallen the PTM and it is likewise labelled anti-state and foreign-funded. This is good enough reason for Pashtuns to join hands with the Baloch people.

The missing persons issue in Balochistan is not a recent one and it dates back to 1973. Nor are the perpetrators in Balochistan rogue police officers like Rao Anwar, who allegedly killed Naqeebullah Mehsud, but the state itself, which systematically implements its policy of enforced disappearances to deter Baloch from demanding their political and economic rights. Thousands are already missing, and the number keeps rising every day.

Undoubtedly, the issue of missing persons requires a unified approach. At the same time, it is important that the reason why Baloch people go missing is not overlooked, forgotten or side-lined. The Baloch go missing because of their political demands and their opposition to the Pakistani army playing God in their land.

It is for this reason that any Baloch involvement in a united front for missing persons has to be on the condition that their political demands are acknowledged and supported. Without this, the Baloch would lose out, and that would be a great injustice to those who have been abducted, tortured and dumped in their thousands in Balochistan, as well as to those who languish in the dungeons even today, and to the relatives of these victims of state terror.

The missing persons of Balochistan go missing because of their politics. Therefore, if this political element is absent from the envisaged united front for missing persons, then it will become a self-defeating, pointless and negative exercise and the state will simply continue in its sordid activities. The Baloch have been agitating for their missing persons for nearly a decade now, and only a few have rallied to their cause. Even the 106-day-long Voice of Baloch Missing Persons (VBMP) march in 2013–14 did not evoke a word of support except from some progressive individuals and parts of civil society. The political demands of the Baloch have acted as a deterrent to people supporting them.

This is because Baloch demands for their sovereignty are considered politically and religiously blasphemous by many. However, it should not be forgotten that if the Baloch give up their politics for fear of opprobrium, this would represent a great injustice to the Baloch people – who want a life of peace and dignity – and an even greater injustice to those who have died or who continue to suffer for these rights.

The anniversary of 27 March 1948, which is the day Balochistan was illegally and forcefully annexed to Pakistan and is observed as a ‘Black Day’ by the Baloch, is nearly on us. It will be interesting to see if the Pashtuns – who are promoting and supporting unity between the Baloch and themselves – will even touch the issue which forms the crux of the political demands of the Baloch after the Quetta events, the PTM long march, the protests and the murder of Arman Loni by state forces. Their attitude, reaction and approach to this day and to the struggle, sacrifices and demands of the Baloch will prove whether there can be any real unity between the Baloch and the Pashtuns in Pakistan.

Mir Mohammad Ali Talpur is a regular commenter on Balochistan. He is a human rights activist and has been associated with Baloch national rights since the 1970s. Image Credit: CC by The Balochistan Post.

Tensions with Pakistan: A mask to hide India’s economic woes
Towards a better performing and more ethical civil service in Bangladesh