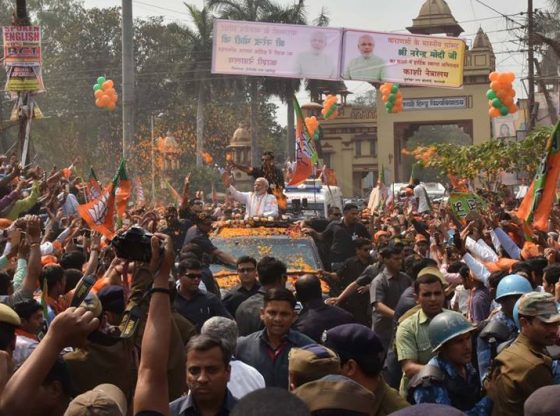 Indian elections used to be dominated by a single national party, Congress. The first-past-the-post or simple plurality system favoured Congress, which regularly controlled the national parliament.  Congress won these majorities with a vote share ranging between 40.7 per cent and 48.1 per cent.  This changed in 1989 when Congress failed to get a majority, and India’s national party system has fragmented since then: the number of parties has increased and coalitions have become the norm.

Congress was caught in a pincer between the Hindu nationalist Bharatiya Janata Party (BJP) and large numbers of smaller, or very small, regional parties based in discrete parts of India’s diverse federal system. When the BJP won a surprise majority in the last national election in 2014, it did so with only 31 per cent of the vote and an electoral alliance with more than two dozen smaller parties (which won 8 per cent of the vote between them).

The regional parties hope they will hold the balance of power after the election, but they are torn between a short-term ambition to join a national government and longer-term ambitions to weaken the national parties in their home state.

Parties use many ways of appealing to voters, but in a fragmented party system alliances with other parties are a short cut to reaching voters who have other allegiances.  This is especially true if, like the BJP and Congress in recent elections, a party has little following in some regions. Regional parties won more votes than national parties in 2014.  How they fit into electoral alliances will be critical to the outcome of the 2019 election.  National parties are keen to ally themselves with regional parties, but how do regional parties assess these ‘tie-ups’?

The second question is: when to form an alliance? An early alliance puts a regional party in a privileged position if their alliance wins a majority outright. Some regional parties even specify their preferred cabinet posts in the pre-election agreement.  Loyalty should be rewarded. Another possibility is to wait until after the election and negotiate with a national party seeking to form a government.  This could be very lucrative if a regional party has the seats that make the difference between a minority and a majority.  The regional king-maker(s) will be well rewarded with cabinet posts or development funds for their home state.  Waiting until after the election is a risky option, but it avoids internal disagreements about which seats to give to the national ally.

Many regional leaders planned on the assumption that Congress and the BJP would fall a long way short of a majority, which would enable them to form a government of their own or dictate terms in coalition negotiations.

The BJP surprised many and won a majority by itself.  The unaligned regional parties had plenty of seats but were irrelevant in coalition discussions.  The BJP, even though technically it did not need to, formed a coalition government giving token cabinet appointments to its pre-election allies.  Congress did very poorly (with less than 10 per cent of the seats in parliament) and a few north Indian regional parties also under-performed. This group of parties was reminded that a divided opposition favoured the leading party (in this case the BJP).

In 2019, the BJP is somewhat short of allies.  A few regional allies left the BJP alliance, complaining of neglect or high-handedness.  The BJP picked up some new allies, but its alliance remains compact.  Congress has added a few regional allies, but not enough to give it the edge.  Opposition to the BJP is being ‘organised’ through a mahagathbandhan (grand alliance) of parties.  Larger regional parties in the states of Andhra Pradesh, Telangana, Uttar Pradesh and West Bengal are not keen to ally with Congress now but would negotiate with Congress after the election.

In 2014, the BJP was helped to victory by a divided opposition.  The BJP faces a slightly less divided opposition now.  The regional parties (once again) hope they will hold the balance of power after the election, but they are torn between a short-term ambition to join a national government and longer-term ambitions to weaken the national parties in their home state.  The king-makers may remain spectators once again.

Andrew Wyatt teaches Politics in the School of Sociology, Politics and International Studies at the University of Bristol.