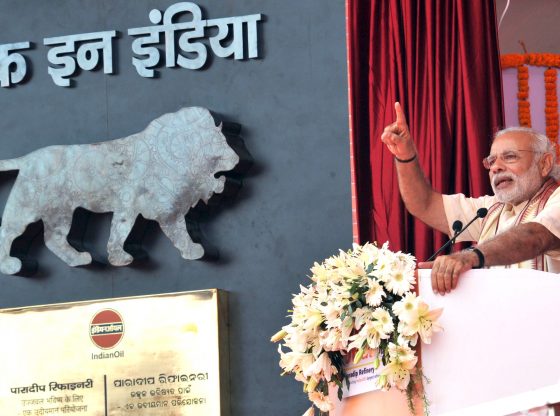 Narendra Modi’s National Democratic Alliance (NDA) government has not done what was needed to fulfil his Achhe Din promise that good times are coming. Policies and initiatives have produced far less than was required in the broad running of the economy, the creation of jobs, and reform of the government machine – and far less than the prime minister promised in his 2014 presidential-style election campaign.

Voting for Modi and the Bharatiya Janata Party (BJP) in 2014 was a gamble for those who were not committed supporters. The hope was that Modi would bring to government the urgently needed drive that he had shown as chief minister of Gujarat, and that he and his party would refrain from the excessive Hindu nationalism typified by the Rashtriya Swayamsevak Sangh (RSS), the umbrella organisation that embraces the party and a host of allied organisations.

As a committed Hindu nationalist, Modi had a ten-year vision to build a strong India that would be respected worldwide as a modern version of an ancient Hindu civilisation after a thousand years of Muslim and British invasions and rule. Those who took the gamble hoped Modi’s nationalism would make him want first to build an economically strong and successful country, of which he could be patriotically proud, with the emphasis on Hindutva coming later.

The gamble has not paid off. Modi has not met the targets, expectations or hopes of those who voted for him, and has instead led an increasingly authoritarian and centralised government with restrictions on media and personal freedoms, and with growing mob violence by vigilante gangs who feel protected by the regime. The independence of many institutions such as the Election Commission, academia, the media, and even the Reserve Bank of India has been undermined.

The government’s main success in the broad area of the economy has been to introduce more formal structures that have begun to reduce the existing informal, corrupt tangle of systems and regulations. The worldwide explosion of digital technology has eased this formalisation with initiatives such as online tax returns.

There have been attempts at an overall crackdown on black money and corruption, but these also included Modi’s economically destructive demonetisation of 86 per cent of banknotes in November 2016, that failed in its primary aims. A path-breaking Goods and Services Tax (GST) developed by previous governments was introduced in 2017, although initially in an over-complicated form, and there have been significant new regulations for bankrupt companies.

There have also been schemes aimed at improving the lot of the poor, ranging from Swachh Bharat on cleanliness and toilets to the electrification of villages.  Personal credit should be given to Modi for Swachh Bharat, which challenges traditional attitudes and behaviour and could have a major impact on people’s health and daily lives. Providing that it is eventually implemented effectively, it could be Modi’s greatest constructive legacy.

Modi failed, however, to initiate many of the key primary reforms that, as a strong new prime minister, he could have tackled in his early months. He was restricted by not having a majority in the Rajya Sabha, the upper house of parliament, but he could and should have used the authority provided by his substantial general election victory to deal with issues such as labour and land legislation, subjects that have been mostly offloaded to the states.

He has shown little concern about the need for agricultural reforms ranging from how farmers market their produce to their exploitation by middle-men and their plight under the burden of heavy loans. And he has failed to lead change in other areas, especially the creation of new jobs – the issue that will be a major factor in how people vote for him in the coming weeks.

Modi and his colleagues like to say that their government is ‘corruption-free’. Modi even asserts that there will be no corruption in the country by 2022. The first claim is grossly exaggerated because, to the extent that it is even partially true, it primarily applies only to government ministers and to the top three or four levels of central government bureaucrats. The second claim is unrealistic.

The cabinet is certainly cleaner than during the 2009–2014 Congress administration, but that has not been hard to achieve and is not a valid yardstick against which to measure real long-term progress. Allegations of cronyism and corruption include one that Modi himself inexplicably triggered by fixing an order for Dassault Rafale fighter jets while on a visit to Paris in April 2015 – a deal that involved Anil Ambani of the Reliance Group, possibly India’s most unsuccessful prominent businessman.

This mixed record of the Modi government presents voters with a challenging choice in the coming general election. For the first time since shortly after Independence in 1947, there are two sharply contrasting routes for India to take.  One is to become a primarily and probably authoritarian Hindu nation with the Bharatiya Janata Party and its fiercely Hindu nationalist Sangh Parivar (family of organisations) in control, and with Muslims and other minorities being regarded as second-class citizens. The other is to restore the tolerant secular traditions set by Jawaharlal Nehru, India’s first prime minister.

This is not a new choice. It has been debated in India for generations, especially at the time of Independence in the late 1940s when Pakistan was created as a Muslim nation and Hindu nationalists argued that India should therefore be a Hindu nation. Jawaharlal Nehru won the argument for a secular approach that accepted all religions, setting the country on its path for the next seven decades. Modi’s rise made the choice live again, although nobody realised when he was elected in 2014 how sharp the contrast between the choices would become.

Congress’s United Progressive Alliance (UPA) is the alternative option, although it too is embracing Hinduism. However, it does not have the same drive for economic reform and is more interested in aid schemes for the poor, which is not what India’s aspirational youth needs. Nor does it have a strong leader to rival Modi. Congress’s dynastic president, Rahul Gandhi, has not proved himself and there is no obvious candidate among the leaders of the UPA’s regional parties.

The choice therefore is between the BJP which, despite its Hindutva approach, has the promise of a more focussed economic programme, providing Modi improves his implementation of it, and the softer option of the Congress-led UPA which is unlikely to have the same economic drive. On current form, and with the recent confrontation with Pakistan in his sails, the betting is on the return of a Modi government.

John Elliott is an author and former Financial Times journalist who was based in New Delhi for over 25 years until May 2018 and writes the Riding the Elephant blog.  A new edition of his book IMPLOSION: India’s Tryst with Reality has just been published by Harper Collins with a special section analysing the Modi government’s record – it is available as a paperback and e-book on Amazon India at https://amzn.to/2HldJQ3  and as Kindle book Amazon US https://amzn.to/2CmQwZE  and Amazon UK https://amzn.to/2FinQTm    Image Credit: Narendra Modi Official/Flickr