Women voters and the 2019 Indian elections 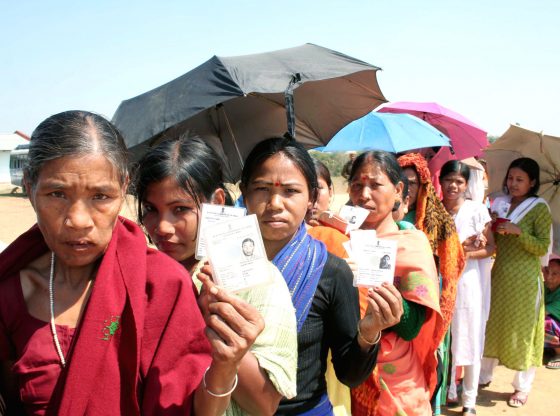 The 2019 Lok Sabha elections will be the first national elections where the overall turnout of women is expected to be higher than that of men. Elections over the last decade have brought more women to the polling booths in India.

Gender is now emerging as a fundamental axis of Indian democracy, alongside caste, class, region, religion and ethnicity.

Targeting women voters separately as an interest group or a constituency is a new phenomenon in a democracy where caste, religion, region and ethnicity have been the major rallying factors for political parties to seek votes. While women and men obtained the right to vote at the same time, women’s votes did not feature in parties’ electoral calculations. Women’s voting behaviour was invariably seen as an extension of their male kin or of the communities to which they belonged, and parties did not address women voters as a separate interest group.

Today, an increasing number of women are voting independently and do not consult their husbands on who to vote for. Women voters making their own voting decisions has led political parties to promise special welfare measures related to women’s education, health, employment and safety in public places.

Take the example of the 2015 Bihar state elections. Nitish Kumar was re-elected as chief minister due to the unprecedented turnout of women voters. Women voted for Kumar for his attention to women’s issues during his previous term: an emphasis on women’s education, a scheme to provide free bicycles to girls attending high school, and measures to boost women’s safety. On assuming power again, Kumar promptly responded to women’s demands for reservations in government jobs and a ban on alcohol consumption in the state. In the 2016 assembly elections, the All India Anna Dravida Munnetra Kazhagam (AIADMK) in Tamil Nadu and the Trinamool Congress in West Bengal relied on women voters to come to power.

The Bharatiya Janata Party (BJP), which heads the national government right now, has been eyeing women’s votes too. During the 2014 national elections it included women’s safety as a key campaign promise. However, despite its victory, the BJP’s overall vote share among women was lower compared to that of men.

Once in power, the BJP government, led by Narendra Modi, announced several welfare programmes such as the Ujjwala Yojana (to extend provision of liquefied petroleum gas (LPG) to more women) and Beti Bachao, Beti Padhao (Save and Educate the Daughter). Women continue to remain crucial in the BJP’s 2019 election campaign, and the party plans to woo them by promising more women-centric welfare schemes.

Beyond welfare schemes and campaign promises, two parties have recently responded to the rising importance of women voters by ensuring that more women contest the upcoming Lok Sabha elections. The chief minister of Odisha, Naveen Patnaik of the Biju Janata Dal, has announced that his party will reserve 33 per cent of the seats for women candidates.  Similarly, the chief minister of West Bengal, Mamata Banerjee of the Trinamool Congress, is fielding women candidates in 41 per cent of the Lok Sabha seats in the state.

Such moves by parties to help more women contest elections might serve as a way to correct the abysmally low representation of women in legislative bodies. Women make up only 12 per cent of the members of parliament (MPs) in India today and only 8 per cent of the representatives in state assemblies. Against such a backdrop, the moves by Patnaik and Banerjee are especially welcome, because the women’s reservation bill to provide a 33 per cent quota to women in parliament remains stuck.

Of course, an increase in the number of women voters and women candidates does not necessarily mean improved gender indicators or reduced inequalities. In fact, the number of ‘missing’ women voters – that is, women who are above the age of 18 but not on the electoral roll – is as high as 21 million. Yet in so far as political parties are supporting more women to contest elections because women’s issues now garner votes, this change represents an ongoing transformation in democratic politics.

Gender is now emerging as a fundamental axis of Indian democracy, alongside caste, class, region, religion and ethnicity, and students of democratic politics in India need to take it seriously. However, we must be mindful that gender alone does not determine who women vote for – social and regional-level political dynamics are important too. Moreover, women voters do not respond only to parties’ focus on women’s issues. In the 2018 Madhya Pradesh state elections, while political parties promised free sanitary napkins and subsidised gas cylinders for cooking, women wished that the parties would pay attention to other issues such as unemployment too.

Women voters might be just as interested in wider socio-economic issues as male voters, and working with the idea of women as a separate vote bank can only go so far in unpacking the dynamics of how and why women vote in India.

Lipika Kamra is an Assistant Professor in Politics and Anthropology at O.P. Jindal Global University, India. She works on gender, democracy and development in contemporary India and tweets at @KamraLipika.

Narendra Modi’s bid for re-election keeps India-Pakistan relations dangerously on the edge
Between a rock and a hard place: China’s health care reforms over the next ten years