A strategic shift in the foreign policy of Pakistan under CPEC 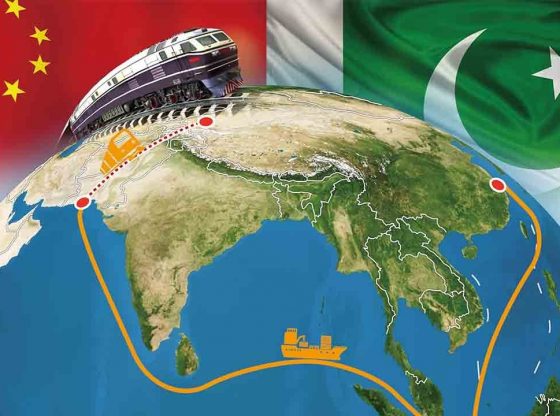 In the contemporary process of globalisation, the sources of threats have also diversified, and a multi-dimensional approach is required to address the new challenges. China believes that a military approach to dealing with security issues in South Asia will further damage the interests of countries in the region. Therefore, the best approach would be to focus on the promotion of economic, social and cultural ties which would be helpful to resolve these issues in a non-military way and will also promote regional security. This is why China launched the Belt and Road Initiative (BRI) and engaged Pakistan via the China Pakistan Economic Corridor (CPEC).

Rapid progress in the pace of CPEC projects has changed the dimensions of Pakistan’s foreign policy with its neighbouring countries and other states in the region.

The tree of Pakistan-China friendship has been growing for many decades. The leaders of both countries have nurtured it passionately with a deep sense of strategic commitment for seventy years now. Together they have weathered all the crests and troughs of their challenging voyage and disregarded all the regional and extra-regional pressures. Complementing each other at all international forums, the countries’ leaders, with the support of their people, ensured that this friendship evolved into a strong bond.

Bearing in mind the consequences of Pakistan’s regional issues in the past, and the damage caused as a result of its military responses, China has offered regional connectivity to promote peaceful coexistence. The latest manifestation of this resolve is the CPEC, a flagship project of the BRI which is speedily reaching each of its milestones. Since the inception of CPEC – a framework for regional connectivity and socioeconomic development – Pakistan has appeared ardent for a de facto shift in its foreign policy.

‘Our foreign policy is one of friendliness and goodwill towards all the nations of the world. We do not cherish aggressive designs against any country or nation. We believe in the principle of honesty and fair play in national and international dealings, and are prepared to make our utmost contribution to the promotion of peace and prosperity among the nations of the world.’

For the first half-decade since its founding, Pakistan pursued a policy of non-alignment. However, faced with several security and economic issues, the country’s foreign policy chart remained unsteady. Ten years on from 1953, Pakistan remained part of the Western bloc. Following the Sino-Indian and Indo-Pak wars, and the resulting Shimla agreement in 1972, Pakistan pursued a policy of non-alignment and bilateralism. The Soviet invasion of Afghanistan in 1979 pushed Pakistan back to US alliances, but the foreign policy of Pakistan faced multiple challenges in the post-Cold War era after the Soviet withdrawal. However, Pakistan once again joined the US-led bloc as a partner in the Global War on Terror (GWOT) after 9/11.

Over the course of its history Pakistan has faced many internal and external security threats, and the situation has become further aggravated in the post-9/11 era. Sadly, due to continuing instability, thousands of civilians and security personnel have died and as a result the overall progress of development in the country has come to a standstill.

How can Pakistan get out of the current crisis, and what role can neighbouring countries play in this regard? Pakistan and China are two important countries of South and East Asia and their collaboration is therefore crucial for the establishment and maintenance of stability in this important region of the world.

A broader shift in Pakistan’s foreign policy has been noted since the launch of CPEC. The objectives of CPEC are in line with the tenets of foreign policy of Pakistan, namely: (1) develop friendly relations with all countries, especially immediate neighbours; (2) safeguard national security and geo-strategic interests, including Kashmir; and (3) ensure the optimal utilisation of national resources for regional and international cooperation.

CPEC is not a bilateral project between China and Pakistan, but it will have a positive impact on the whole region. Rapid progress in the pace of CPEC projects has changed the dimensions of Pakistan’s foreign policy with its neighbouring countries and other states in the region. In the wake of CPEC, the improved security situation in Pakistan has made it an attractive destination for foreign direct investment (FDI). Tajikistan, Iran, the UK and many other countries have expressed their willingness to join CPEC. Meanwhile, Pakistan has invited Turkey, Saudi Arabia and Russia to join CPEC.

It is the first time in the history of Pakistan that the execution of a project has remained safe from political developments and regime change. Moreover, Pakistan has an independent foreign policy to promote regional integration and stability. In the past, it was economic dependence on the US and security concerns that generated Pakistan’s foreign policy. However, signing up to CPEC with the world’s second-largest economy has raised Pakistan’s status in the global world order. Pakistan has initiated a friendly gesture towards two rival states – Iran and Saudi Arabia – by inviting them to join CPEC.

Saudi Arabia is keen to set up an oil refinery at Gwadar port. Meanwhile, Iran has declared that its own port of Chabahar is not a rival to Gwadar. Pakistan has welcomed these moves for the greater regional interest, which may help mitigate regional conflict. Moreover, unlike the past, Pakistan’s foreign policy is neither based on economic dependence on the US nor is it India-oriented. Despite America’s withdrawal of military aid and Indian opposition to CPEC, Pakistan has not tried to please the US and continues with the implementation of CPEC.

China and Pakistan both want Afghanistan to join CPEC. Pakistan is pursuing a foreign policy of creating a peaceful and stable neighbourhood. In another break with its past actions of joining blocs or being part of a proxy war, Pakistan has facilitated a round of peace talks between the US and the Afghan Taliban. And despite India’s aggressive behaviour, Pakistan has sent out a message of peace. Instead of paying heed to the actions of the US and India, Pakistan foreign policy has focused on regional integration, peaceful coexistence and socioeconomic development.

Strategic cooperation and interdependence between China and Pakistan has increased manifold in the post-9/11 era, mainly due to CPEC and Pakistan’s strategic position in the region, and this cooperation will increase further in years to come.

Anam Fatima is a researcher at the Pakistan Institute for Peace Studies, Islamabad, Pakistan. Image Credit: CC by Corridor.pk.

From the Sabarimala Temple to triple talaq: The issue of religious discrimination against women in India
The India-Pakistan conundrum: Sending the wrong signals