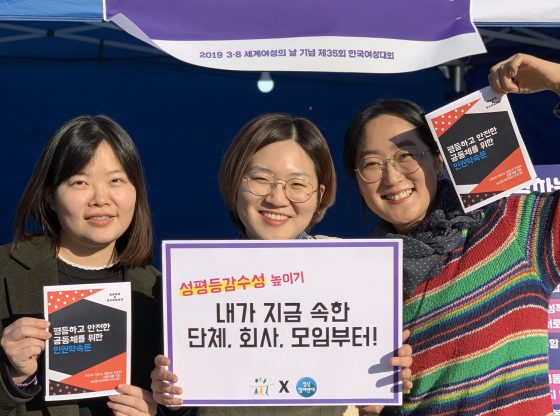 South Korea saw its own #MeToo movement develop in 2018. This started in January, when public prosecutor Seo Ji-Hyeon accused a senior ministry official of groping her. Following her complaint she described suffering punitive responses, including job transfers and poor performance reviews.

March saw Ahn Hee-Jung resign as governor of South Chungcheong province after rape allegations from his secretary Kim Ji-Eun. A court in Seoul later declared there was insufficient evidence against Ahn and questioned the legitimacy of Kim’s testimony, as she ‘did not act like a victim’.

In March, nearly 200 women gathered in Seoul to discuss their own cases of sexual harassment and assault non-stop for 2018 minutes, and in June, over 20,000 people protested in Seoul against the practice of spy cameras being used to film women in public places such as restrooms.

Our survey demonstrates that while more physical forms of harassment are widely recognised as inappropriate, there is a disparity between genders when it comes to other forms of interaction.

The rise of harassment and assault cases, or at least the public reporting of such cases, has been well documented. Meanwhile, critics contend that government education efforts against sexual assault promote victim blaming, and that the broad libel laws further allow for the intimidation of those who are harassed or assaulted.

One result of the #MeToo movement, however, has been the amendment of South Korea’s Equal Employment Opportunity (EEO) laws to include stronger sexual harassment policies, due to come into effect on 29 May 2019.

January 2019 saw the first impact of the #MeToo movement on the South Korean sports world, when the Olympic short-track speed skater Shim Suk-hee accused her coach of raping her. Since then, female athletes from other sports have also stepped forward and accused their coaches of sexual harassment and sexual assault. South Korea’s National Human Rights Commission is now investigating all athletics programmes and will interview thousands of athletes in the process.

Potentially lost in South Korea’s #MeToo movement is a broader discussion of what constitutes harassment. Conventional wisdom suggests that cross-nationally, men and women view harassment differently, yet this is rarely empirically tested. The 2018 American Family Survey found that perceptions of what constitutes harassment vary according to sex and age. For example, a majority of male respondents did not believe asking for sexual favours was always harassment, whereas two-thirds of the women who responded thought it was. A 2001 study published in the Journal of Applied Psychology found that gendered perceptions of what constitutes harassment in the workplace varied depending on the situation described. The gender difference was most pronounced in responses regarding more ambiguous behaviours, such as pressure to go on dates.

Differences in perceptions between men and women have potentially far-reaching implications, especially in a traditional patriarchal society like that of South Korea, ranging from the effectiveness of anti-harassment efforts in the workplace to perceptions about punishments – or the lack thereof – for such acts.

Perceptions of harassment also seem to show cultural variance. Some research suggests that Asian survey respondents are more tolerant of sexual harassment actions compared to non-Asian respondents. Compounding this is cultural variation in relation to the willingness to report harassment and assault. At least one study suggests there are higher rates of unreported sexual assault in some Asian countries which emphasise a woman’s virginity and modesty in relation to her family’s honour.

To address perceptions of harassment, we surveyed 739 South Koreans this month via an experimental web survey, conducted by Macromill Embrain, using quota sampling by region and gender. Respondents were randomly assigned to receive one of seven prompts about different forms of harassment by a male towards a female co-worker. We intentionally chose prompts focusing on the workplace because many of the high-profile #MeToo cases revolved around workplace harassment. Existing studies such as the 2016 survey of sexual harassment victims by the Korean Women Workers Association find senior employees to be the most common offenders, but we did not want to focus myopically on this hierarchical dynamic.

The seven versions of the prompt were:

Version 1: I would consider a male co-worker complimenting a woman’s physical appearance to be harassment.

Version 2: I would consider a male co-worker criticising a woman’s physical appearance to be harassment.

Version 3: I would consider a male co-worker making crude jokes or sexual innuendos to a woman to be harassment.

Version 4: I would consider a male co-worker touching a woman on the waist to be harassment.

Version 5: I would consider a male co-worker touching a woman on the thigh to be harassment.

Version 6: I would consider a male co-worker brushing up against a woman’s breasts to be harassment.

Version 7: I would consider a male co-worker grabbing a woman’s vaginal area to be harassment.

The table below presents the percentage of respondents who stated that they agreed or strongly agreed that the act constitutes harassment, broken down by gender and by version received. Little difference emerges between men and women in relation to perceptions about the more egregious – i.e. physical – forms of harassment, apart from the version focusing on touching the waist. However, we find large differences in perceptions between men and women when it comes to verbal forms of harassment. Less than one-fifth of men viewed complimenting a woman’s appearance as harassment, compared to a slim majority of women. A similar majority of men viewed criticising appearance as harassment, while over four-fifths of women did so. A smaller difference emerges between men and women when focusing on crude jokes or sexual innuendos, where over three-quarters of men and over ninety per cent of women viewed the act as harassment. Additional analysis finds marginal differences based on any other socioeconomic or political variable. In other words, age, education, income and political ideology did not appear to significantly influence perceptions.

This survey demonstrates that while more physical forms of harassment are widely recognised as inappropriate, there is a disparity between genders when it comes to other forms of interaction. It may not be surprising that most male respondents do not consider complimenting a woman’s appearance as a form of harassment – something that is commonly interpreted as positive and could even be intended as flattering. Female respondents, on the other hand, clearly see things differently, perhaps viewing this as undesired attention at best or objectification and a threat to personal security at worst.

Since this analysis did not test perceptions of harassment towards men, it is also unclear whether men more broadly view verbal examples as simply outside the definition of harassment, equating harassment more closely to assault. The limited attention to harassment directed at men still leaves many perceptual questions largely unexplored, but the initial evidence here suggests that perceptual differences raise questions about the effectiveness of anti-harassment efforts. Similarly, if verbal forms of harassment are rarely disciplined in the workplace, this would simply reinforce perceptions that these cases are a less serious concern. In the future, anti-harassment policies and training might look to address this issue.

As already stated, it is important not to focus myopically on a hierarchical dynamic since senior employees are regarded as the most common offenders. However, future research should nonetheless try to assess whether female perceptions of harassment differ according to their employment, regardless of their socioeconomic status. This would include, for example, investigating whether women working in traditionally gendered roles such as secretaries or receptionists not only internalise societal expectations of the role but also the expectation of increased levels of harassment.

In the future it would also be interesting to study whether workplace anti-harassment training changes perceptions about and disciplinary action in response to harassment. Such training – mandated as part of the EEO amendment – remains too new for these effects to be identified at present. In the short term, such regulation may result in more women reporting their experience of harassment – but only if commensurate disciplinary action can be expected to follow.

*The survey used in this article was funded by the Academy of Korean Studies (AKS-2018-R05).

Beyond the BJP/Congress dichotomy: Reflecting on the possibilities of a Third Front
In a war of perceptions versus outcomes, Modi looms large in the Indian Elections