In a war of perceptions versus outcomes, Modi looms large in the Indian Elections 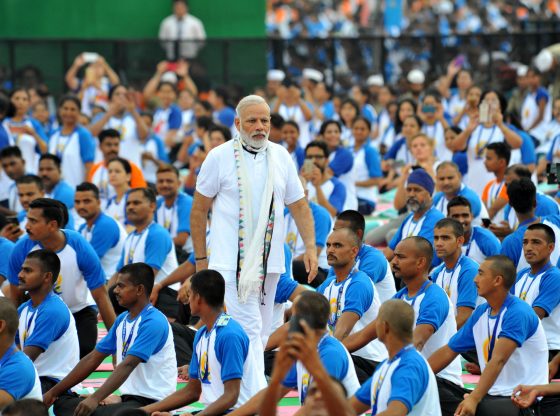 With the announcement of general elections to the 17th Lok Sabha (Parliament), India is set to embark on another fierce electoral season marked by the largest exercise of democratic political transition anywhere in the world. The Election Commission of India (ECI), the guardian of this mammoth exercise in all its trials and contestations, has been able to maintain the sanctity of this process over the years, and so too, to a large extent, the sanctity of Indian democracy itself. But as the electorate of approximately 900 million register their electoral choices over the coming months, there is much for ordinary voters to ponder and consider in terms of what should guide their decision.

An analysis of electoral behaviour in India shows that voting percentages tend to be higher in elections at the local level, followed by elections for the state (provincial) assemblies, and then parliamentary elections. This implies that more people vote when they have an immediate connection to the issues at play. By this logic, the electorate therefore considers parliamentary elections to be more a reference point for national issues and national politics.

‘Opposing Modi implies opposing India’ is the narrative that the BJP election machinery has been trying to develop since the recent standoff between India and Pakistan.

The difference for the elections in 2019, however, is that political parties from all sides are cutting across this logic of personal versus national issues when talking about the successes and failures of the current National Democratic Alliance (NDA) government led by the Bharatiya Janata Party (BJP).  And the side which is best able to manage the war of perceptions is the one that will win the prize.

I shall now discuss the main issues of contention which will set the agenda for the 2019 elections.

The immediate backdrop is the standoff between India and Pakistan over the Pulwama attack on Indian troops and the retaliatory strikes by India followed by the release of the Indian pilot shot down by Pakistani planes, which has already raised the electoral temperature. The BJP has tried its best to give this a political twist, with Prime Minister Narendra Modi himself leading the charge, comparing his government’s action with the (in)action of previous governments in his election meetings and implying that the opposition is turning its anti-Modi stance into an anti-India one.

‘Opposing Modi implies opposing India’ is the narrative that the BJP election machinery has been trying to develop since the recent standoff. The local BJP units became so enthusiastic that they started putting photos of Indian Air Force pilots on their posters – a move which was strongly criticised by the ECI.

The biggest plank of the ruling regime’s strategy is the renewed nationalism ignited by the issue of national security, and so any questioning of government policy or actions on national security makes the other side ‘anti-national’. The latest electoral refrain is that the ‘New India’ is not shy of taking bold steps – unlike the old, which had its ‘Lakshman Rekha’ (the mythological metaphor for the Line of Control).

For the ordinary man on the street, this narrative resonates fairly well. As for the opposition, which is still looking for a grand counter-narrative, this puts it on the back foot, helped along by prime-time and social media warriors.

Against the immediacy of this narrative, the wider focus of the opposition’s counter-charge around increasing unemployment, continuing agrarian distress, the increasing mob vigilantism of right-wing groups and, most importantly, the inept crisis management within premier institutions such as the Central Bureau of Investigation, the Reserve Bank of India and the Supreme Court, has been completely lost in the din. The opposition’s inability to build its own narrative has been due to a number of factors.

First, in the last few months the Congress Party, led by its dynastic president Rahul Gandhi, has invested too much time and attention in the Rafale deal for the Indian Air Force (which ought to have been made more an issue of mal-governance rather than one of corruption), instead of focussing on issues that relate directly to the common voter. Paying attention to agrarian distress and unemployment in three state assembly elections recently led to victory for Congress, but it came almost as an after-thought, and attention then immediately went back to Rafale.

Second, there is no clear mahagathbandhan (grand alliance) of the opposition yet, which would be essential to counter any split among voters. India’s regional leaders are far too concerned with creating alliances at the regional level (in order to protect their bargaining power vis-à-vis the centre) to be able to come together at the national level.

Third, there is a clear mismatch between the opposition’s ineffectual campaign and the high-decibel election campaign of the ruling regime, which is aided by front-page advertisements and a social media blitzkrieg about the government’s achievements using images of the Prime Minister, who remains the most effective campaigner for the party. Any presence by the opposition in virtual or print media remains restricted to headlines about a leader’s statements rather than any remarkable messages that they could be articulating. Modi looms large everywhere, in railway teacups and radio ads, on Namo TV and in a potential Bollywood release under his name (all of which are being referred to the ECI by the opposition). Modi’s latest refrain is that he is the ‘Chowkidar’ (watchman), in response to Rahul Gandhi’s charge of ‘Chowkidar Chor Hai’ (the watchman is a thief). Unfortunately, in the process, any genuine political discourse is being lost in the din

‘The country needs a strong leader and I will vote accordingly. But when it comes to my ward, I would rather vote for the person who helps me in distress.’ So sums up a voter in my locality [Goa] with regard to his options for voting. Millions of others may or may not feel the same way.

It is this net introspection in regard to Indian democracy which will decide whether or not ‘namumkin ab mumkin hai’ (the impossible is possible now), as the government’s election tagline goes. After all, it was this same party which had a vision of ‘India Shining’ in 2004, only to be abandoned for a decade by the common man. When all is said and done, India’s democracy owes more to the aspirations and trials of the common people than it does to anything else.

Rahul Tripathi is Professor and Head of the Department of Political Science at Goa University, India.