Book Review: Oil and Water: Being Han in Xinjiang 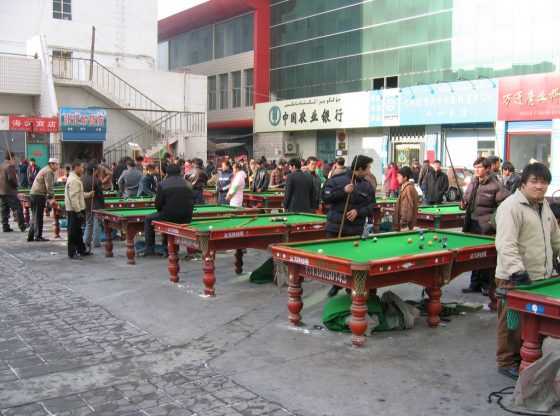 Review by Timothy A. Grose.

The disturbing images of detainees held across the Xinjiang Uyghur Autonomous Region’s (XUAR) concentration re-education centres (Ch. jizhong jiaoyu zhuanhua zhongxin) provide a sobering reminder that the People’s Republic of China’s (PRC) far northwest is governed using radically different measures than those enforced in Han-dominated central and eastern China. The fact that the incarcerated are predominately Uyghur and Kazakh exposes, once again, the PRC’s socio-ethnic hierarchy, which valorises Han people and their culture over ethnic minorities. Unquestionably, Uyghurs and Kazakhs undergoing “re-education” are thrust into an environment that simultaneously denies them of Central Asian and Islamic norms while they are bombarded with secular Han values and “correct” thinking. Indeed, the proliferation of re-education centres marks an acceleration of the Chinese Communist Party’s (CCP) larger socio-political goals in Xinjiang: transform the region to more closely resemble China Proper (Ch. neidi).

Yet, this project is comprehensive, gradual, and far-reaching. It seeks to dramatically alter the region’s topographies, demographics, political structures, and cultures under the guise of economic development. In his theoretically engaging and richly descriptive ethnography, Tom Cliff, Research Fellow at Australian National University, examines this transformative process from the perspectives of multi-generational—as well as regionally and socially diverse—settlements of Han migrants who hold the key to CCP-led development. This book is the fruit of over two years of field work in Korla, the second largest city in Xinjiang, which is located 200 kilometres (120 miles) southwest of Ürümchi. While residing in Korla and teaching English at a middle school connected to the Tarim Oilfield Company, Cliff collected oral histories from the city’s Han residents. His position at the middle school proved invaluable for establishing rapport with his Han interlocutors, who may have been hesitant to share intimate details with a foreign researcher.

Cliff organises his findings in seven main chapters that present three themes—migration, empire, and time (4-6). Chapter One profiles the so-called constructors (Ch. jianshezhe)—Han people who contribute physical labour in socio-political transformation projects (27)—many of whom travelled to Xinjiang in the 1950s and 1960s to serve in the semi-autonomous paramilitary farming Production and Construction Corps, or bingtuan.  Beyond transforming physical space, the efforts of bingtuan constructors have been paramount in “normalizing” the local (i.e. Uyghur) culture to be more akin to central China (32-44). The following three chapters juxtapose Han experiences within the bingtuan and the Tarim Oilfield, a state-owned enterprise (SOE) and an example of “21st-century developmental modernism in Xinjiang” (51). This comparison throws into sharp relief the gradual transition (e.g. changes to structures and social expectations) from Maoist-era work unit employment (Ch. danwei) to the reform-era’s social contract system (76). Chapters Five and Six underscore the importance of interpersonal networks (Ch. guanxi) among Han in Korla to demonstrate another process by which the cultural practices of the metropole (i.e. the Han) are spread and reproduced in “peripheral” Xinjiang. Finally, Chapter Seven explores the dynamics of the relationship of mutual dependence forged between the Party state and XUAR’s swelling Han population.

Oil and Water’s central argument is compelling: CCP leaders and Han migrants constantly negotiate and reproduce the asymmetrical arrangement between the “modern” Han core of neidi and the “backwards” XUAR frontier.  Therefore, the CCP’s “colonial endeavor” (9) in Xinjiang—a syllogism that attempts to reconcile the difficulties applying contentious terms such as “colonialism” and “empire” in an analysis of Xinjiang—is paradoxical. According to Cliff, “The integration of the persistent frontiers of China’s northwest is not only impossible, it is undesirable to the imperial-thinking core” (215). In other words, it is politically and economically advantageous—even necessary—for both the CCP and Han migrants to preserve a periphery-metropole relationship between the XUAR and neidi.

To be sure, Oil and Water does not present Han migrants in Korla as a monolith. With precision and empathy, Cliff carefully peels back the layers of state-sponsored development in Xinjiang to place into focus the individual Han agents—and their subjectivities—integral to the CCP’s nation building programs. Viewed from afar, Han migrants share common “constructor” collectivities built upon an inherent, but sometimes tenuous, relationship to the state (185). However, their place of origin, time of relocation, and motivations (i.e. self vs. state-sponsored) have created an intra-group hierarchy (45). More specifically, urban Han who relocated to the region as part of state-directed migration programs (Ch. bendiren)—and their offspring—sit atop the perch of this hierarchy (157) while recent arrivals struggle to form symbiotic political and economic relationships. Therefore, the state must carefully address Han grievances in order to prevent intra-ethnic conflict, which may compromise stability (183-87). In fact, Cliff argues—perhaps too confidently—that the CCP regards Han discontent as a greater threat to stability in Xinjiang than the so-called “Uyghur problem” (184-86).

Specialists may raise issue with other assertions. For example, Cliff interprets a slight modification—actually a correction—to the corresponding English translation of a Chinese-language billboard to be indicative of a fundamental shift in the Party’s discourse on “civilization” without providing evidence to substantiate his claim. One may wonder why such an important shift in discourse would only appear in an English caption. In another example, Cliff assumes the Qianxi (迁徙) residential complex, meaning “to migrate,” is purposely used to invoke the homonym   meaning “to advance one’s seat” (前席) (39). It is just as conceivable that the name qianxi was chosen for this exclusive housing building to capture the emotions of romantic evenings (前夕). Similarly, several of Cliff’s English glosses of Chinese terms were too creative, sometimes to the point of inaccuracy (e.g., 102, 125, 162, and 215).

I cannot overstate that these minor (and debatable) shortcomings do not detract from otherwise pathbreaking scholarship.  Lucidly written, Oil and Water provides its audience with an intimate look inside one of the most securitised regions of the world. It is essential reading for experts and graduate students in the fields of Xinjiang Studies, Critical Han Studies, Modern China, and is a valuable case study for post-colonial theorists.

Dr Timothy A. Grose is Assistant Professor of China Studies at the Rose-Hulman Institute of Technology. Image credit: CC and CCE/Flickr.

Southeast Asia’s competitive sub-regionalism: Overlap and superfluity?
Paolo Rossi and all that: Reflections on the origins of football fandom in China