Paolo Rossi and all that: Reflections on the origins of football fandom in China

Home /China, China Soccer Observatory, Football, Sport/Paolo Rossi and all that: Reflections on the origins of football fandom in China 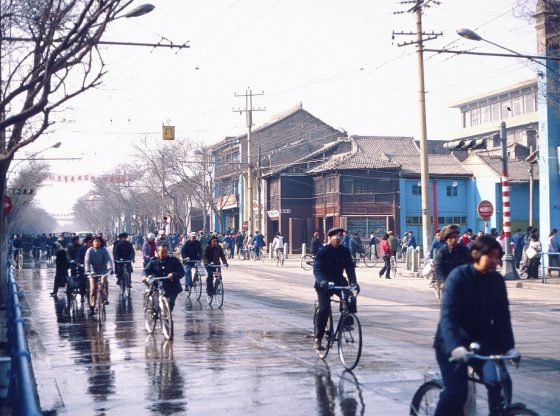 Chinese football fans’ interest in other nations’ football teams was formed earlier than their support for the Chinese national football team and local football clubs. In 1978, Argentina hosted the 11th World Cup Finals, and the match for third place between Italy and Brazil as well as the final between Argentina and the Netherlands were the starting point for Chinese people beginning to watch football games on television.

At that time, it was rare for a Chinese family to own a television, and as soon as one did, it was usual for a large group of people including friends, family members and neighbours to gather together to watch TV programmes, even on a 9-inch black and white screen. 1978 was also the year when Chinese television stations resumed regular broadcasting, which meant that only a few entertainment programmes were available.

Meanwhile, because of the technological support of the Beijing Television Station (the predecessor of today’s China Central Television), which ‘borrowed’ the satellite signals of foreign broadcasting companies, along with commentator Shixiong Song’s (宋世雄) assiduous preparation, the World Cup Finals became the most impressive series of TV programmes to be enjoyed in China that year. As a result, the Chinese people developed a special fondness for football, the World Cup, and those four countries in particular, thereby establishing the foundations upon which Chinese football fans’ support of overseas football teams would develop.

Although at the time Chinese football fans could get match information from the newspaper Football (足球) and from radio broadcasts, both of which could announce the results before television, most of them still preferred to wait for nine hours to watch the televised games. The 1982 World Cup Finals allowed Chinese people to learn the names of superstars such as Paolo Rossi, Zico, Michel Platini and Karl-Heinz Rummenigge and to enjoy their performances, and so the fandom of the first generation of Chinese football fans was born.

Paolo Rossi scored a hat trick in the match against Brazil then three goals in the semi-finals and finally brought ‘Rossi mania’ to China. His hairstyle was regarded as the height of fashion and was imitated by many, and one fan even changed his name to ‘罗西’ (Luoxi, the Chinese translation of Rossi). The fan was Wengang Li (李文纲), a worker in the Anshan Iron and Steel Group Corporation (鞍山钢铁集团公司), and in 1984 he organized the first football supporters’ organisation in China.

China’s World Cup adventures also started in 1982, and Rong was selected as captain of the national football team. Although China lost to New Zealand in a qualifying game for the 1982 World Cup Finals, Rong’s excellent skills and good attitude, especially his respect for his rivals, led to him being praised, and his behaviour was seen to represent the Chinese people’s views on competition at that time. The idea of ‘friendship first, competition second’ (友谊第一，比赛第二) still dominated Chinese people’s attitudes towards sport, and Chinese athletes were expected to perform in a friendly and polite manner in order to help the nation forge good international relations.

However, a post-match riot in 1985 revealed a rather different way in which support for the Chinese national football team was being influenced by the World Cup and the Chinese people’s emotional attachment to the nation. On 19 May that year, the national football team lost a game against Hong Kong in Beijing and failed to qualify for the World Cup Finals.

‘Event 5.19’, as the riot became known, was the first and largest in the history of Chinese sport. Although the Chinese police described it as organised sabotage, Agence France-Presse regarded it as an indication that the Chinese had finally begun to integrate with the world by adopting football hooliganism.

Watching the World Cup on TV and following the fortunes of the national team enlightened Chinese football fans. They had learned how the fanatical Argentinian fans demonstrated their passion for their team. Furthermore, the 1980s was the decade when the Chinese people emerged from the shadow of the Cultural Revolution, during which emotional outbursts had been suppressed. Now the atmosphere of the World Cup encouraged Chinese football fans to express their emotions at games, with matches involving the national team providing opportunities for fans to celebrate their national identity.

In sum therefore, initial fandom associated with the Chinese national football team was formed by a combination of television, the influence of the World Cup, the end of the Cultural Revolution, and the desire to celebrate Chinese national identity.

Book Review: Oil and Water: Being Han in Xinjiang
The electoral politics of caste in Tamil Nadu: Why TTV Dhinakaran matters more for the BJP than the DMK