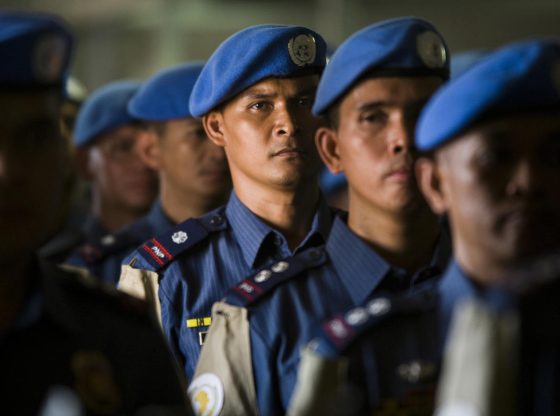 Over the past decade, there has been a convergence in the policies of the ten states of the Association of Southeast Asian Nations (ASEAN) with regards to their participation in international peacekeeping.

Singapore, Thailand and the tiny Sultanate of Brunei had begun to contribute to peacekeeping operations under the United Nations (UN) after the Cold War. Cambodia joined the group of contributing countries in 2005, Vietnam in 2014, and Myanmar reversed its isolationist stance in 2015, sending a small number of peacekeepers to Liberia and South Sudan. Indonesia and Malaysia, the regional countries with the longest history in UN peacekeeping, have broadened their engagement over the past years, and the same is true for the Philippines. Hence Laos is the only country to date that has no direct experience in peacekeeping.

At the same time that the number of Southeast Asian peacekeepers deployed with the UN has grown, governments in the region have begun to promote peacekeeping as a suitable area for defence cooperation and military diplomacy. Security officials from ASEAN (including Laos) and its extra-regional partners have engaged in multiple dialogues and fora to promote the exchange of information and best practice around peacekeeping. Underlying these activities has been the widely shared idea that peacekeeping will contribute to regional peace and security. As such, it forms part of ASEAN’s proclaimed Political-Security Community (APSC).

However, notwithstanding the apparent newly found enthusiasm for peacekeeping, there has been no advance towards substantive cooperation or even an integrated ASEAN peacekeeping capacity. A proposal for this was first put forward by Indonesia, in 2011, and in 2015 it was taken up by Malaysia. Both times, the idea was taken off the table before a discussion could get started.

Singapore had no interest in an integrated regional force and the more authoritarian members of ASEAN feared creating an instrument that would later be turned against them. In addition, no-one presented a tangible plan for how regional peacekeeping capacities would be paid for. This showed clearly that the obstacles to creating a regional peacekeeping instrument are ample. So too, however, are the opportunities for sub-regional cooperation between those countries which espouse similar aims, motivations and standards when it comes to peacekeeping.

Indonesia, Southeast Asia’s ‘natural leader’, declared that peacekeeping was one of the cornerstones of its term as a non-permanent member of the UN Security Council, and it has publicly pledged to deploy 4,000 peacekeepers. Indonesia’s foreign policy elite has long emphasised that peacekeeping operations should be UN-mandated, non-interventionist and adhere to the principle of minimum use of force.

Although Indonesia has effectively participated in a number of so-called robust UN missions, where peacekeepers are mandated to use force offensively if necessary in order to protect civilians, its position excludes ‘peacekeeping’ efforts such as that led by the US in Iraq, in which Singapore did participate. Given that most ASEAN states share Indonesia’s caution when it comes to the use of force in peacekeeping, the country is well-placed to push for concrete sub-regional peacekeeping initiatives and would likely benefit from cooperation in terms of its long-term foreign policy goal to become an actor on the global stage.

Vietnam, too, is likely to play a prominent role in a sub-regional initiative. Since identifying peacekeeping as an instrument to bolster its international agenda, Hanoi has systematically implemented policies to develop the capacities necessary to send peacekeepers abroad, particularly through exchanges with other countries which have experience of peacekeeping. The ASEAN states would further benefit from identifying and developing intra-regional synergies, since some of them – particularly Cambodia – maintain that they cannot contribute with large peacekeeping contingents, although they have pursued a niche policy of preparing specialised components instead.

The absence of tangible initiatives for cooperation beyond the bilaterally organised exchange of individual trainers and students between some of the region’s peacekeeping training centres is glaring. For instance, binational contingents deployed under UN command can set off budgetary constraints for individual countries, but only Singapore and Brunei have in the past taken advantage of such opportunities.

A small ASEAN rapid reaction group drawing on national contingents would allow states to retain control over where and when peacekeepers are deployed. Although cooperation is typically less common in the area of security than in commerce and investment, there are precedents which have been reasonably successful, such as the coordinated, sub-regional maritime patrols to counter terrorism and piracy that have involved the Southeast Asian maritime states in different combinations.

Sub-regional initiatives to promote Southeast Asian peacekeeping capacities have several benefits beyond the immediate ones of cost reduction. First, regional instruments for peacekeeping would fill a void in regional security governance. Given the absence of a regional framework, the UN was called upon to intervene in East Timor and the Organisation of Islamic Cooperation (IOC) in Mindanao in the southern Philippines, respectively.

Second, a sub-regional force would raise the profile of ASEAN globally, since the UN has placed considerable importance on the role of regional organisations in reducing the need for international peacekeeping. For the individual states, peacekeeping can provide impulses for professionalisation, as long as this is accompanied by broader domestic reforms. Not least, the development of regional peacekeeping capacities would make a tangible contribution to the ASEAN Political-Security Community.

Nicole Jenne is an Assistant Professor in the Institute of Political Science at the Pontificia Universidad Católica de Chile and an Associate Researcher at the Centre of International Studies (CEI-UC) of the same university. Follow her on Twitter at @nicjenne.

The electoral politics of caste in Tamil Nadu: Why TTV Dhinakaran matters more for the BJP than the DMK
China’s awkward embrace of naturalised football players