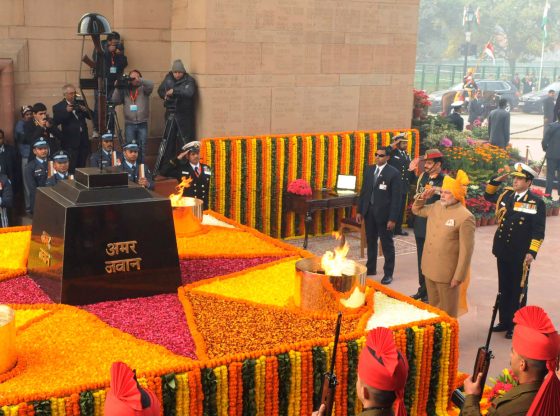 Barely a couple of months ago, it looked as though Narendra Modi’s Bharatiya Janata Party (BJP) and its allies were going to struggle to hold on to their majority in India’s general election, scheduled for April and May 2019. Some predicted that the BJP might fail to win even 200 seats – far short of the 272 it needs – and that Modi might therefore struggle to construct a governing coalition.

But then came the suicide bombing at Pulwama in Kashmir on 14 February, which killed more than 48 members of India’s paramilitary Central Reserve Police Force. That incident prompted retaliation – a strike by the Indian Air Force on alleged terrorist camps inside both Pakistan-administered Kashmir and Pakistan itself – and risked a wider conflict. And it allowed Modi and his allies to change the character of the election campaign irrevocably and present themselves in a different light.

Back in 2014, when the BJP won a landslide victory, Modi cast himself as a so-called vikaspurush – a ‘development man’ – and his party promised ‘growth for all’. The soon-to-be Prime Minister turned jibes about his past and his family’s relative poverty against his attackers, declaring that he was proud to have once been a chaiwallah (‘tea seller’) and that he wished merely to serve the nation.

In the current campaign, however, Modi has assumed a different avatar. In the days after the air strikes, he and his supporters rebranded themselves as chowkidars or ‘watchmen’ – those steadfast individuals ubiquitous in India, who sit at the gate to every house and compound, supposedly vigilant to the threats the outside world might bring. A slick social media effort followed, with an online video (and a catchy song) in which people declare themselves to be chowkidars in solidarity with the Prime Minister, repeating the slogan Main Bhi Chowkidar (‘I am a watchman’).

The upbeat video championed the various achievements claimed by the Modi government: cleaning up India, fighting corruption, distributing gas bottles to poor households, ensuring girls get an education, and its ‘Make in India’ push to build a manufacturing industry. The video implies that Modi and his ministers have stood watch over all of these efforts to ensure their success, and it calls on all citizens to do the same. Towards the end, however, at around 2 minutes and 53 seconds in, the video takes a different turn. A soldier appears, donning camouflage paint and his uniform, then Modi, posing on top of a self-propelled howitzer, and then a group of troops patrolling – and then firing somewhat wildly – in a forest. This section of the video ends with mocked-up footage of an air strike.

If there was any remaining doubt that the Modi government saw an electoral advantage in its record on national security, this was dispelled on 27 March 2019 when the government ordered the test of an anti-satellite (ASAT) missile. The Prime Minister went on television to announce the test, declaring in a ten-minute address to the nation that ‘Operation Shakti’ (‘Operation Power’), as he termed it, made India a ‘space super power’.

Whether Pulwama, the chowkidar campaign or the ASAT test – they have all distracted attention from a series of problems the Modi government has struggled properly to address, including agricultural distress and the plight of farmers; the lack of jobs and apparent inability of government to put in place policies to encourage their creation; accusations of misdeeds in the procurement of military aircraft from France; and the BJP’s controversial attempts to insert its ideology into school textbooks and university research agendas.

The focus on national security also appears to have boosted Modi’s personal popularity, bringing it somewhere close to where it was back in 2014. In January this year, only 46 per cent approved of the job the Prime Minister was doing, according to an India Today poll, with 34 per cent backing his principal opponent, the Congress Party’s Rahul Gandhi. By the beginning of March, however, sympathetic media outlets were reporting that the mood was changing and Modi’s stock was rising.

It remains to be seen whether Chowkidar Modi can ride this new wave of support back into government in May. The prevailing wisdom is that in India, as in other democracies, voters make their choices on the basis of domestic issues, not foreign or security policy, which they generally consider distant from their immediate concerns. But some commentators have also pointed to polls suggesting that in the aftermath of the Pulwama attack, a sizeable number of voters now consider national security a pressing issue.

Given how much energy Modi has invested in it, it is clear he believes that foreign policy is one of those areas in which a Prime Minister can hone their image at home as well as abroad. His frenetic personal diplomacy, especially during his first eighteen months in office; his trademark hugs, bestowed on world leaders from Shinzo Abe to Donald Trump; and his appearance at a series of major summits and conferences were certainly about selling his ‘New India’ to the world, but they were also about burnishing Modi’s reputation domestically. These efforts aimed at replacing the image of the divisive strongman with that of a respected statesman, striding across the world stage.

The chowkidar campaign signals a shift back to an earlier Modi, however – to the muscular would-be scourge of terrorists and other enemies of India with a ‘56-inch chest’. That man made his reputation in the late 1990s and early 2000s as a firebrand, for example, calling for New Delhi to respond to Pakistan’s provocations during the 1999 Kargil crisis not with ‘chicken biryani’, but with a nuclear ‘bomb’. Whether this avatar has more appeal for the Indian electorate than the vikaspurush who contested the election in 2014 will be tested in the coming weeks.

Ian Hall is a Professor and Deputy Director (Research) at the Griffith Asia Institute, Queensland, Australia. His book Modi and the Reinvention of Indian Foreign Policy is out later this year. He Tweets @DrIanHall.

Greece in the “16+1” format? Reading the Sino-CEE tea leaves
Foreign stars boost Chinese football attendance but weaken the stability of the league