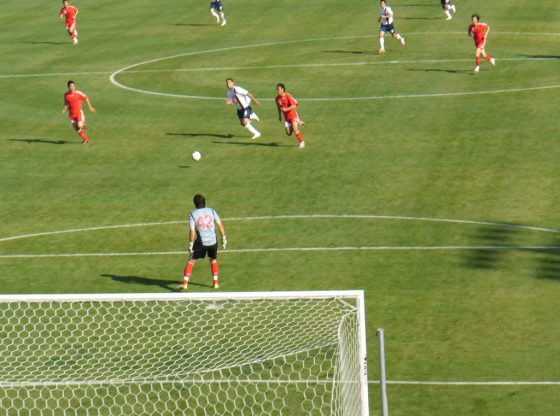 Written by Joshua I. Newman.

The recent let-downs of the Chinese men’s national football team have been well documented across the international sports media landscape. From the failure to qualify for the 2016 World Cup to the earlier-than-anticipated exit from the recent Asian Cup, the team’s on-field performance has become a source of great disquiet among media publics in China and beyond.

Given that one of the explicit goals outlined in the 50-point Chinese Football Reform and Development Program was increased success by the men’s national team, it is no surprise that the team’s (under)performance is often linked in the media to questions of government and administration. But who, or what, is to blame? Whichever links are made in the media will frame public understanding about the state of football in China, as well as the Chinese State itself.

To understand better these how these linkages are framed for the media-consuming public both in and outside China, my colleagues Liu Zheng, Ryan Chen and I recently conducted a comparative content analysis of national (Chinese) versus international coverage of the Chinese men’s national team. We analysed more than 750 news media articles (536 in Chinese and 230 in English) over the period starting from the qualification rounds for the 2016 World Cup (February 2015) and ending with the conclusion of the 2019 Asian Cup (February 2019).

Western media – particularly in the US – focused on Chinese cultural norms, national bureaucracy and, most persistently, the Chinese Communist Party

In Mandarin-language articles endogenous to the Chinese context, state-run and state-moderated media tended to focus on the failures of individual players and the player development system administered by the Chinese Football Association (CFA).

Major themes emerging from the Chinese media included: problems with the Chinese player development system; consideration of the effect that top foreign players migrating to the Chinese Super League (CSL) would have on Chinese national team players; the potential negative effects on top players (such as Wu Lei) of playing oversees; challenges associated with integrating naturalised players into the national team; and the perceived failure of mid- and high-level football administrators to develop and implement a long-term strategy.

By comparison, the English-language media (namely in the United States and Western Europe) tended to make direct links between the men’s national team and macro-level structures. Western media – particularly in the US – focused on Chinese cultural norms, national bureaucracy and, most persistently, the Chinese Communist Party (CCP). Indeed, it was common in the pages of outlets such as The Economist, The Washington Post or The New York Times to find analyses attributing the team’s failures to the overemphasis of Chinese parents on education (and corresponding under-emphasis on or stigmatisation of youth sports participation).

There were also numerous articles that framed the football problem as a problem of state administration, whereby state actors who are football novices are perceived to be mis-shaping the sport due to a lack of expertise or vision. Most prevalent, however, Western media simply explained that the Chinese men’s football failings were symptomatic of the alienation and dehumanisation experienced by citizens under ‘authoritarian rule’.

Based on our findings, it became clear that there is a politics of mediation at play in how the failures of the men’s national team on the field are framed for various media publics. In China, the media frame the football crisis as a problem of individual players or administrators – one that would be remedied with new personnel or better conditions for player development (i.e. fewer international players in the CSL, more/less exposure to foreign leagues, etc.). In the Anglophonic West, media operatives use the struggles of the football team to provide fresh and renewed criticism of Chinese customs, of socialism, of key state actors and of the CCP more generally.

For example, in a Washington Post article titled ‘Why China doesn’t dominate soccer’, a US academic derides China by noting that ‘China’s soccer troubles are a case study in the limits of authoritarianism’. He argues that the repressive state control of individual freedoms in China is akin to that of former Eastern European police states. Often the analyses in the English media resorted to what Chinese communications scholar Tianru Guan (2019) refers to as ‘authoritarian determinism’, whereby complex issues of player migration, cultural norms, social identities and administrative complexities were reduced to a simple critique of the supposed dictatorial practices of the central government.

The scalar and associative variance at the heart of these two different frames (or stories) of the Chinese men’s national football team are at once illustrative of different cultural/geopolitics emanating from East and West and of how the media often look to construct reality for the consuming public.

It was clearly the case that the Chinese media tended to transpose the burden of fault onto the players (and away from the administration or top administrators). This is perhaps to be expected, given the contemporary media politics at work in the People’s Republic. However, it was also clearly the case that contributors to Western discourse were radically political in their extrapolation of the team’s performance onto a broader critical sphere of acculturation, control and authority. While such political exigency aligns well with spectacular anti-China Western geopolitics, it must surely be called into question as yet another form of biased media politics.

Joshua I. Newman is Professor of Media, Politics and Cultural Studies in the Department of Sport Management at Florida State University and a fellow at the China Soccer Observatory. Image Credit: CC by Dinur/Flickr.

Social media, BJP 2.0 and the 2019 general elections in India
China’s embrace of the Greater Mekong Subregion