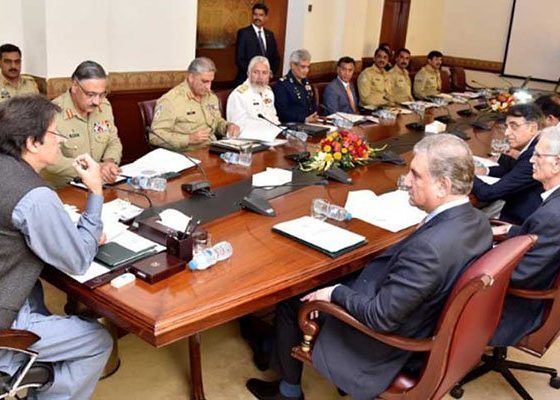 The National Internal Security Policy (NISP) has been hailed in government circles as a major step forward in Pakistan’s quest for internal security. It is undoubtedly a crucial step, if for no other reason than that it is Pakistan’s first such strategy document dealing with terrorism and extremism.

Around the world, there has been a mushrooming of counter-terrorism structures and institutions to coordinate national counter-terrorism (CT) and counter-extremism (CE) efforts. These include the National Counter-Terrorism Center (NCTC) and the Department of Homeland Security (DHS) in the USA, and the Joint Terrorism Analysis Centre (JTAC) and the Office for Security and Counter-Terrorism (OSCT) in the United Kingdom, amongst many others.

As a result, there has been a proliferation of national strategies such as the American Defeat, Deny, Diminish and Defend (4Ds) and Britain’s Pursue, Prevent, Protect and Prepare (4Ps). Pakistan lagged behind, until it was able to present its own policy document, in which former Prime Minister Yousaf Raza Gilani’s 3D counter-terrorism policy (Dialogue, Development, Deterrence) was projected as a major step forward.

A unanimous resolution passed on 22 October 2008 by the Parliament of Pakistan established 14 guidelines for a National Counter-Terrorism Policy prepared by the Parliamentary Committee on National Security (PCNS). The Committee also stressed the need for a comprehensive CT Strategy, the need for a central institution to integrate CT efforts, and the formation of a National Counter-Terrorism Authority (NACTA)  to ‘coordinate and unify’ national CT efforts.

However, Gilani’s 3D policy could not be implemented, and the focal CT structures which sprang up in its wake, such as NACTA, have remained ineffective till now. The NISP is the latest attempt at rationalising a security policy for Pakistan; ostensibly, it is poised to take over from where 3D halted and will put a much more detailed plan into action.

The Pakistani army has been a critical player in Pakistan’s struggle against terrorism to date, not just because that is its role, but also because civilian structures such as the police are currently unable to take on this role themselves

The NISP envisages both soft and hard interventions. Political ownership and faith in the democratic process in Pakistan is stated as a major component of the soft measures, which also envisage a Comprehensive Response Plan (CRP).

The NISP certainly has enormous significance. However, one of the significant factors that needs to be examined is not the strategy per se, but the length of time it took for the government to articulate it. This holds within it implications for the fundamental challenges facing the political forces in Pakistan, who are essentially trying to create a new narrative.

It is also necessary to ask why, if Parliament has the power to sanction research, the NISP has been so late in coming? There are any number of institutions which predate the NACTA and could have been mandated with drawing up the NISP. Presumably, the issue is more to do with political capacity than the absence or coordination of relevant organisations.

Then there is the issue of duplication of roles, which assumes even greater significance in the context of tactical forces for dealing with counter-terrorism. Setting up forces like the Federal Rapid Response Force (RRF) is a huge task which requires intensive resources, training, capability and seamless coordination mechanisms. A developing country like Pakistan has to consider seriously the immense resources associated with establishing new entities such as the RRF, especially when many forces already exist which have been dealing with terrorism and security for a long time or have the inherent ability to do so.

If NISP is to be rolled out effectively, then NACTA will be instrumental not only in implementing NISP but also in raising public awareness around the perils of allowing terrorism and radicalisation to grow and the ways and means to curb it. This is the era of specialised bodies, and NACTA was ostensibly created to be a focal point for CE and CT efforts.

However, by their very nature, the plethora of roles that have been thrust upon NACTA – from tactical strategy to research and from deradicalisation to countering extremism – effectively convert NACTA into a ‘non-specialist’ body. This is because these are all distinct disciplines, certainly with overlapping contexts but sometimes requiring very different approaches.

For this reason, organisations like the JTAC in the UK, for instance, remain essentially intelligence coordination bodies, while tactical forces remain tactical forces with the ‘brains’ being located somewhere else although in close coordination. For an organisation like NACTA, which has had a chequered past, in a developing country like Pakistan, which faces a huge number of challenges, perhaps a more limited but more specialised role would have been better.

Another issue is the ‘force paradigm’. Ever since insurgency raised its head in Pakistan, the armed forces have been the most effective (some would say the only) force deployed in a counter-insurgency campaign against the terrorists. The presence of foreign jihadis and of Afghan jihadis trained in Pakistan who then return to Pakistan complicates the issue. Value judgements aside, the Pakistani army has been a critical player in Pakistan’s struggle against terrorism to date, not just because that is its role, but also because civilian structures such as the police are currently unable to take on this role themselves.

The army’s only operational deradicalisation campaign, which sprang from its incursions into Swat, are the Sabahoon and Mishal projects. These are both military-driven initiatives, and there have never been any viable civilian projects to compare. Consequently, and any lofty ambitions or principles aside, pragmatically speaking, any civilian initiative will have to start on a learning curve which has to necessarily win over the military as a willing partner. The civilian-military debate seems to raise its head more and more in Pakistan nowadays, but mere slogan mongering will not achieve anything unless both sides sit down and resolve to work together in complete harmony, rather than staying in the silos they are accustomed to.

Pakistan was ranked in the 35th percentile of the World Bank’s World Governance Indicators (WGI) for Regulatory Quality in 2008, which was a considerable increase from the 29th percentile in 2007, though down from 38.5 in 2006. After a series of plateaus and dips, in 2013 the position was still quite bad. Pakistan’s regulatory systems are weak, primarily because regulations are often poorly specified, the regulatory agencies lack capacity, policy is inconsistent, and there is a lack of transparency. Sometimes legislation is passed but then not fully rolled out or implemented.

This raises several questions. Where are the key bottlenecks in the system? Is failure to implement due to a lack of capacity or other political-economic reasons? Notwithstanding the need for the NISP and whether ‘its heart is in the right place’, there will be immense challenges during its institutionalisation. A great deal of institutionalisation and peace-building is needed to address the key issues of indirect rule, regionalism and radicalisation.

Issues such as contested religious values, ethnic divisions and insecure boundaries, as well as the lack of institutional and fiscal capacity all pose severe challenges to the creation of robust institutionalising structures. Unless the regulatory frameworks in Pakistan are drastically improved or redefined, the typical knee-jerk reaction of creating large bureaucracies to deal with the growing challenges will continue to fail.

Khawaja Khalid Farooq is a former head of the National Counter-Terrorism Authority, Pakistan and Inspector General of Police, Punjab. He is an expert commentator and analyst on counter-terrorism, law and order, and policing strategy.

This article is an excerpt republished from the report by Khawaja Khalid Farooq and Manzar Zaidi: ‘National Internal Security Policy of Pakistan: An Assessment’, Centre for International and Strategic Analysis (SISA), Oslo Report No. 25.

The state of the states: The crucial regional parties and the parliamentary elections in India. Part III
Politicising national security, securitising poverty