Parliamentary elections in Jammu and Kashmir: Will the result be a mosaic? 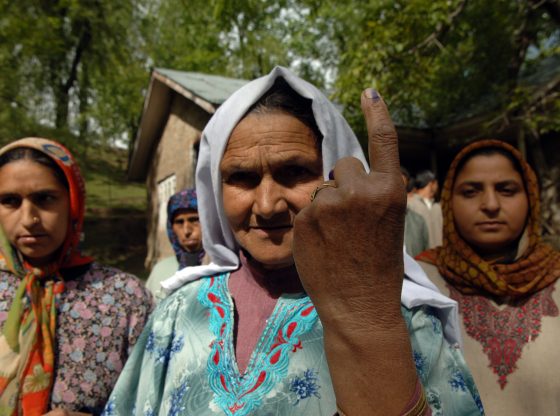 The Indian parliamentary elections in Jammu and Kashmir (J&K) hold special significance amidst the national elections being held for the 17th Lok Sabha because, unlike the rest of India, where the debate is largely around who will form the next government, this state is poised at a critical juncture.

Over the last two decades, J&K has witnessed a steady, albeit gradual restoration of popular faith in the democratic process. However, these political gains are once again threatened by the growing alienation of the populace, a revival of militancy with a sharp increase in killings right across the political spectrum – including militants, members of the security forces and civilians – and declining levels of voter turnout, especially in the Kashmir Valley.

The current round of electoral contests and results will have important implications for the regional and religious fault lines within the state, as well as the shifting political alignments between divergent political forces. These range from the separatists, locally and regionally nationalist and centrist parties, to those raising the clarion call for the full integration of J&K – a euphemism for ending the state’s special status within the Indian Constitution.

The making and unmaking of the alliance between the Jammu and Kashmir People’s Democratic Party (JKPDP or PDP) and the Bharatiya Janata Party (BJP) has been the single most important development since the national and state legislative assembly elections in 2014. The alliance was a flawed project because the PDP and the BJP represent ideologically antithetical political forces. In 2014, the PDP campaigned aggressively against the BJP and was supported by the cadre of the Jamaat-e-Islami and Hizbul Mujahideen in South Kashmir in order to ‘keep the “Gosanis” [a dysphemism in Kashmir for the Rashtriya Swayamsevak Sangh (RSS), the paramilitary wing of the BJP] away from Lakhanpur [the entry point into J&K]’. Later though, the PDP not only embraced the BJP, but even formed a coalition government with it.

The state government utterly failed to follow the ‘Agenda of Alliance’, however, because the PDP’s ‘healing touch’ policy and the BJP’s mantra of ‘muscular nationalism’ were poles apart and ended up undercutting each other. Although Mehbooba Mufti (J&K’s Chief Minister from 2016 to 2018) had forged her political career when in opposition through sympathising with the families of militants and demanding rehabilitation and justice for them, the level of militancy registered a sharp up-turn on her government’s watch. The growing ranks of the militant groups, being swelled with locally educated Kashmiri youth, and the excessive use of pellet guns by the security forces against civilian protestors have significantly deepened Kashmiris’ alienation from the Indian state.

The failure of the PDP-BJP alliance has affected both parties and perhaps triggered a re-alignment of political forces which will be seen in the results of these parliamentary elections. While the BJP’s withdrawal of support was viewed as a betrayal, Mehbooba was nonetheless held responsible for hurting Kashmiri pride and, in the eyes of many, for virtually inviting the RSS into Kashmir.

The fall of the PDP-BJP government in October 2018 was greeted with celebrations in many parts of South Kashmir – Mufti’s erstwhile bastion. Since then, the PDP has faced unprecedented attrition in the party’s ranks, with as many as thirteen senior leaders – including former ministers and Members of the Legislative Assembly (MLAs) – quitting the party. The BJP even tried to engineer a split in the PDP and form a government in alliance with the PDP rebels and two MLAs of the Jammu and Kashmir People’s Conference (JKPC) party, headed by Sajjad Lone, although that did not succeed.

Mufti’s support base in South Kashmir stands severely eroded, and the central government’s decision to ban Jamaat-e-Islami, a religious-political organisation based in J&K, will further undercut it, since the Jamaat-e-Islami cadre have tacitly supported the PDP in past elections. Hence, from a strong position of having won all three parliamentary seats in the Kashmir Valley in the 2014 elections, the PDP is facing a battle for political survival in this round, with the party president Mehbooba Mufti herself facing a tough battle on her home turf.

The BJP is also going to find it difficult to maintain the dominant position it gained in the 2014 elections, when it won both seats in Jammu and one seat in Ladakh. Barely six months ago, the BJP’s Member of Parliament (MP), Thupstan Chhewang from the Ladakh seat, renounced his parliamentary seat and quit the BJP, blaming the Modi government for having done nothing for Ladakh during its four years of rule at the centre and claiming that its unfulfilled promises of development were nothing but empty rhetoric.

Although the BJP accorded divisional status to Ladakh as part of a damage-limitation exercise, the revival of a demand for Union Territory status for this region is the key plank around which candidates of both the BJP and the Congress are going to fight these elections. This does not portend well. Not only does it run the risk of undermining – if not undoing – the hard-fought political struggle for the Autonomous Hill Councils in both Leh and Kargil that had shifted the focus towards the developmental needs of the region, but it may well exacerbate the religious polarisation within Ladakh between the Shia Muslim-dominated Kargil district and the Buddhist-dominated Leh district.

Significantly, Sajjad Hussain Kargili, the independent candidate from Kargil who has traditionally opposed the demand for Union Territory status, is being backed by the Jammu and Kashmir National Conference (JKNC), the PDP and the new party (the Jammu and Kashmir People’s Movement) led by former Indian Administrative Officer (IAS) Shah Faisal. With the rebel Congress leader, Haji Asgar Ali Karabalai, having thrown his hat into the ring, this election promises to be a multi-cornered fight.

The fear of religious polarisation is also a critical factor in the Jammu region. This is partly because of the BJP’s stringent advocacy for the abrogation of Article 370 and Article 35-A – which grant a special status to J&K within the Indian Constitution – as a key electoral plank in these elections. At this point, however, it is not clear if the BJP will drop this demand from the National Democratic Alliance’s manifesto as it has done in the past. However, unlike the BJP government led by Atal Bihari Vajpayee from 1998 to 2004, Narendra Modi’s regime has no qualms about deploying Hindutva ideology for the purpose of political mobilisation, or using a discourse of Muslim disloyalty for its own political and electoral ends.

Yet there is very little realisation that there is a symbiotic relationship between Hindu nationalism and the Islamisation of Kashmiris’ identity: each drives the other. This had already become clear in the aftermath of the Amarnath land transfer controversy: this snowballed into a major agitation in the summer of 2008, when fears of Hindu India’s plans to decimate the Muslim character of Jammu and Kashmir were first whipped up in the Kashmir Valley, leading to a communal backlash by another political mobilisation led by the Hindu right, comprising the Bajrang Dal, Shiv Sena, Vishwa Hindu Parishad and the BJP in Jammu.

Therefore, when protestors in Jammu announced an economic blockade and disrupted traffic on the Jammu and Kashmir highway at the time, Kashmiris viewed it as an existential threat, despite its marginal impact in economic terms. And now again, the BJP’s vociferous demand for the abrogation of Articles 370 and 35-A along with its relentless pursuit of ‘muscular nationalism’ have deepened the anxieties of Kashmiri Muslims in the Valley and left the Jammu region even more polarised along religious fault lines. Nonetheless, it remains to be seen whether this will completely override the regional and secular mobilisations in the Jammu region. This is partly because the Hindu support base for the BJP in Jammu is at risk of being split. This is due to two reasons.

First, the ex-BJP leader, Choudhary Lal Singh, who was expelled from the party last year, has floated a new party called the Dogra Swabhiman Sangathan Party. This party is fighting elections from both the Jammu and Udhampur seats, and this may eat into the BJP’s votes. Harsh Dev Singh of the Jammu and Kashmir National Panthers Party is also likely to play spoilsport and dent the Hindu vote bank in Kathua and Udhampur districts. In the Udhampur-Doda constituency in particular, the scenario is even more complicated because the BJP’s Jitendra Singh, a minister in Modi’s government, is pitted against the Congress party’s candidate, Vikramaditya Singh, who is the grandson of the Dogra Maharaja Hari Singh.

Second, neither the JKNC nor the PDP have fielded candidates in the two parliamentary constituencies of the Jammu region, and this may work to the advantage of the Congress party in consolidating votes in its support.

In the Kashmir Valley, the separatists have, as always, called for a boycott of the elections. All of the regional political parties, including the JKNC, the PDP and even the JKPC led by Sajjad Lone, along with the independent candidates, have denounced the BJP’s call for abrogation of Articles 370 and 35-A as a dangerous move – a line that is also supported by the Congress party, which is supporting Farooq Abdullah, the chairman of JKNC, in the Srinagar constituency.

These political alignments put the BJP at the other end of the spectrum on account of its demand for the full integration of the state of Jammu and Kashmir into the Indian Union, although in the context of Ladakh, the demand for Union Territory status is already veering in that direction. In the Kashmir Valley, this explains why the People’s Conference has not entered into a pre-poll alliance with the BJP, although the two parties have worked closely together in the past few years.

What is ultimately important in Jammu and Kashmir is not which party wins the maximum number of seats. On the contrary, if the parliamentary seats are fairly evenly split among different political parties – both regional and national ones – this may augur well for the political future of the state. This is because safeguarding the deeply plural character of J&K in the long run is the sine quo non for a lasting peace.

A wide diversity in the political beliefs of the state’s representatives will not only carry this important message to the new parliament, but it may well also give new hope to the populace in all three regions that democratic channels are very much available for achieving their political ends. A political mosaic remains the best bet for the state. The question is, will this be what the electorate delivers?

Navnita Chadha Behera is a Professor in the Department of Political Science at the University of Delhi and is currently a Visiting Fulbright Fellow at George Washington University, Washington DC.