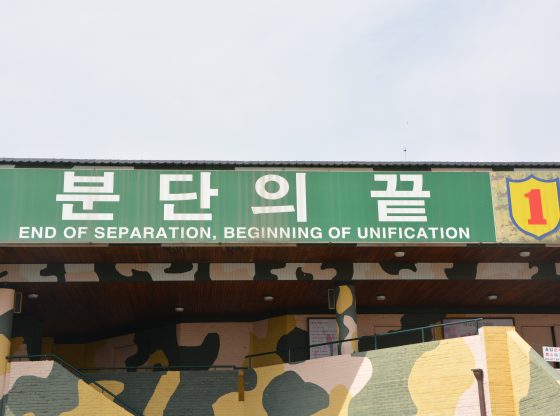 Written by Timothy S. Rich and his students Andi Dahmer and Kaitlyn Bison.

Public opinion research on Korean unification consistently finds clear majorities in favour of (re)unification. For example, research from the Asan Institute consistently finds over 60 per cent support unification in the abstract, and even during surveys in 2010 right after the sinking of the South Korean submarine the Cheonan a slight majority remained supportive.

However, it is less clear to what extent contextual factors relating to unification potentially influence levels of support. With wide variations in estimates of the cost of unification, one might assume that an emphasis on costs would have a negative impact on public perceptions, especially as South Koreans internalise that such costs would likely mean higher taxes, cuts in current levels of public expenditure, or both.

Some estimates find that the costs of (re)unification (most likely to be paid by the South) could be anywhere from USD 2 to 5 trillion, and even then, the average income of those from the North would only be a fraction of that of South Koreans. This figure encompasses a number of challenges that would occur as a result of unification, including the sharp contrast between the infrastructure of the North and South. To place this in a wider context, the cost of reunification of East and West Germany, which had been separated for 45 years, amounted to roughly USD 1.9 trillion. By contrast, Korean reunification has been estimated to cost more than USD 3 trillion.

Additionally, (re)unification would likely encourage greater internal migration. An influx of North Koreans immigrating to the developed South could initially be very damaging to the economy and overwhelm the current bureaucratic infrastructure that Seoul has established for migrants from the Democratic People’s Republic of Korea (DPRK). Furthermore, an increase in the number of North Koreans in the South will exacerbate tensions over cultural and linguistic differences and emphasise the need for additional resources for a successful reunification.

Younger South Koreans appear particularly disinterested in unification, particularly during their own lifetime. Research by the Korea Institute for National Unification (KINU) finds that only 38.9 per cent of those in their twenties found unification to be necessary, compared with 71 per cent of those over 60. Furthermore, Koreans in their twenties were twice as likely to have a negative attitude towards a one-nation state.

Unlike older generations, who remember friends and family members who remain in the DPRK, the younger generations are less likely to view North Koreans as members of the same nation-state. This lack of connection to citizens in the North, in addition to the impact of unification on the South Korean job market, significantly influences the opposition of young South Koreans to unification. However, few studies directly measure the influence of either factor.

To address whether support for unification is influenced by how the issue is presented, we surveyed 739 South Koreans in March 2019 via an experimental web survey conducted by Macromill Embrain, using quota sampling by region and gender. Respondents were randomly assigned one of three prompts and asked to evaluate the statement on a five-point scale from ‘strongly disagree’ to ‘strongly agree’.

Figure 1 shows the percentage of respondents who agreed or strongly agreed with each statement. Here we find that mentioning the economic costs, even in vague terms, appears to decrease support for unification. There appears to be less of a concern regarding increased North Korean migration to the South. Regression analysis further confirms a statistically significant negative relationship between receiving Version 2, which highlights costs, and support for unification. Meanwhile age, income and education correspond with greater support, and gender (female) and conservative political ideology negatively correspond with support.

Admittedly, these results may not be stable over time, as our own survey work with an identical question in November showed less sensitivity to costs. Nevertheless, these findings suggest that perceptions of unification should be tested in multiple ways to separate abstract views on unification from those that consider some of the implications of unification. We also asked whether respondents believed unification would occur in their lifetime, with 41.41 per cent overall answering ‘yes’. A closer analysis according to the version of the question received finds marginal differences (43.09 per cent, 40.08 per cent and 41.06 per cent, respectively). In other words, the potential costs and likelihood of migration did not seem to alter perceptions regarding the timing of unification significantly.

Several other factors potentially influence views on unification and on North Korea more broadly, not the least of which is North Korea’s belligerent rhetoric and its nuclear programme. To address this further, we conducted an additional randomisation of three prompts, again asking respondents to evaluate the prompt on a five-point scale (‘strongly disagree’ to ‘strongly agree’).

In general, as can be seen in Figure 2, a majority of South Koreans did not agree that North Korea has a right to possess nuclear weapons. We also find that emphasising international condemnation has little effect on South Korean perceptions on this issue. However, mentioning that the nuclear weapons create a security concern in the region appears to increase ambivalence among respondents, resulting in a 12 per cent decline among those who disagree with the statement and decreasing the percentage of respondents who stated that the North had a right to nuclear weapons.

It is unclear what explains this pattern, although regression analysis further confirms that those receiving Version 3 were less likely to disagree with the statement, even after controlling for the same socioeconomic variables mentioned above. While the US is mostly concerned about North Korea’s possession of nuclear weapons and its potential to reach US territory, South Koreans may simply not see the weapons in the same light, which could also explain the decrease in condemnation with Version 3. These findings also reiterate the challenge of the generational decline in support for unification, combined with what might be a poor understanding of the broader ramifications that unification would entail. Because mentioning potential costs decreases support for reunification, this suggests that many South Koreans have failed to internalise the costs. Meanwhile, the lack of a similar decline when reunification is framed in terms of migration suggests that South Koreans may not see unification in terms of political and economic challenges. Rather, migration in this sense potentially suggests a moment to celebrate as families reunite. Future studies should aim to pinpoint how South Koreans view migration post-unification.

Reunification remains the official goal of both governments. However, this goal relies heavily on hopes that the current obstacles which are being put off for another day can somehow be resolved in a vaguely defined future. The public may also be following the lead of the Moon Jae-In administration in South Korea that appears more focused on confidence-building efforts to improve inter-Korean relations rather than denuclearisation. Regardless of such efforts, South Korean officials and the public more broadly should consider the practical ramifications of unification, rather than assume that these issues will solve themselves with regime change in North Korea.

India’s Afghanistan dilemma and the way forward
Parliamentary elections in Jammu and Kashmir: Will the result be a mosaic?