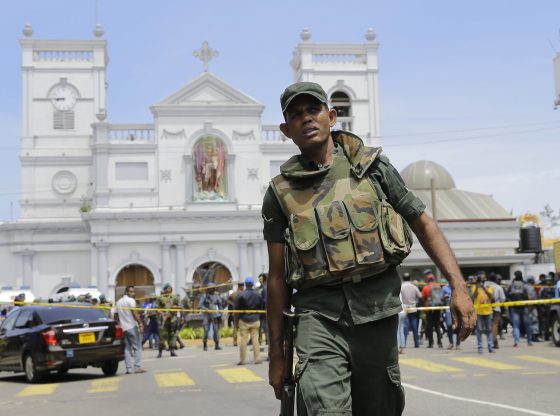 On 21 April 2019 three Christian churches and three luxury hotels were attacked by suicide bombers, leading to the deaths of over 250 innocent people who had gathered to celebrate Easter. This atrocity was followed by further attacks in Amparai, in which innocent children were killed.

These devastating attacks raise a great many questions. For example, why was the government unable to prevent them, despite prior warning? How was Islamic State (IS) able to infiltrate Sri Lanka? Was this tragedy the result of political infighting? Nobody knows the answer to these questions yet, but the most important question seems to be, what happens next?

To find out what will happen next, we must start by understanding the ideology that permeates the Sri Lankan state: Sinhala Buddhist chauvinism. This form of nationalism bears a remarkable similarity to the ideology of the Nazi ideologue Carl Schmitt. In this piece, therefore, I shall outline how Schmitt’s concepts will shape the future of Sri Lanka, with a specific focus on the friend/enemy distinction.

Core to this nationalist ideology is the ‘friend/enemy’ distinction through which the state can identify itself as well as an existential ‘Other’, who must be opposed with the full force of the state. The Indian political theorist, Rajeev Bhargava, explains that this ‘radical other with whom no conversation is possible, [is] one who is outside one’s semantic universe. Those who do not adhere to the doctrine defining the system are enemies to be fought’. This incorporates both internal and external components.

Bhargava says: ‘Internal dissent too is anathema, akin to betrayal, of joining the camp of the enemy, signifying treachery. Felt as existential threats, both outsiders and deviant insiders must be “converted”, brought in line or altogether expunged’. In Sri Lanka, the internal Other is the ‘radical Islamic terrorist’ as well as dissident journalists who dare to attack the military. The external Other is an international order which is responsible for the ‘weakening of the intelligence services’ by scrutinising the state.

It is on the basis of this justification that total war and a suspension of the legal order will be enacted. These attacks represent an attack upon Sri Lanka’s society and thus, as Carl Schmitt writes: ‘As soon as it is attacked the battle must then be waged outside the constitution and the law, hence decided by the power of weapons’.

As the investigative journalist  Phil Miller has written: ‘The well-trodden “war on terror” grand narrative, a clash of civilisations between Muslims and Christians in a 21st-century crusade, makes little sense in Sri Lanka’. This is because throughout Sri Lankan history, the Muslim community has been largely deferential to the state. However, IS has since emerged on Sri Lanka’s territory, and I suggest there are two factors that enabled this. First, the Sri Lankan government’s perpetual war against the Tamil Tigers, and second, the country’s Sinhala nationalist ideology.

The government’s defeat of the Tamil Tigers – a secular Tamil separatist group – in 2009 was shortly followed by increased military occupation of the north and east of Sri Lanka, which is home to the Tamil population. Many hoped that 2009 would mark the end of the traumatic war and that the horrific human rights abuses in Mullaitivu would become a distant memory. Instead, what we saw was the normalising of the abnormal presence of the military, which became embedded in the fabric of the Tamil homeland.

The military not only occupied vast swathes of land in the north and east, ostensibly for ‘security’ purposes, but it also ran hotels and tourist resorts and controlled the economy. In Mullaitivu, the military is stationed in such high numbers that it comes to the ratio of one soldier for every two civilians. The role of these soldiers is to hawkishly watch over the burning embers of Tamil nationalism and stamp out any dissent. This military stranglehold on the north and east has enabled human rights abuses to persist post-war, including arbitrary detention, rape and abduction.

Despite their overwhelming presence in the region, Sameer Patil, the director of Gateway House’s Centre for International Security, notes that: ‘The Sri Lankan security agencies still go on their long experience with the bloody insurgency. … Their mindset is still attuned to any future terrorist attack coming from Tamil Tiger extremists’. This perpetual war enabled the security apparatus to turn a blind eye to the frightening developments in the south, even with prior and frequent warnings from the Muslim community.

This brings me to my second point: the Sinhala nationalist ideology demands that people be engaged in a perpetual war of self-defence. Having defeated the Tamil Tigers, the Buddhist extremists then turned their focus towards the Muslims. What followed was a series of pogroms and attacks by the majority Buddhist community against religious minorities including Muslims and Christians. Dozens were killed and the period from 2014 to 2018 ‘saw constant pogroms and counter-pogroms’, with the security forces often turning a blind eye to attacks on minorities.

In response, the National Thowheed Jamaath (NTJ) was formed in 2014, primarily to protect the Muslims community from further attacks. As Zachary Abuza states, this group was primarily interested in a ‘defensive jihad’, but later it became radicalised by Islamic State fighters. Central to their belief is the totality of this ‘friend/enemy’ binary, a totality which mirrors that of the Sinhala state. This extremist Islamist militia wages an offensive jihad against all.

The face of fascism

As Nimmi Gowrinathan explains, Sri Lanka’s approach will only lead to further violence and radicalisation. The state has already begun registering the details of Muslim residents, evoking memories of when Sinhala rioters obtained lists of voter records and targeted Tamil households during their anti-Tamil pogroms.

Minister Patali Champika Ranawaka has presented a 10-point proposal to curb radicalism, which includes the banning of the burqa, deporting foreign Islamic teachers, and monitoring mosques. Those most at risk are Pakistani refugees, who ‘look different, speak a different language and were already on an unsure footing, living in Sri Lanka as guests of the government while refugee agencies sorted out longer-term resettlement plans’. These groups have already faced violent reprisals. Nonetheless, these racist postures have been accepted by some Muslims groups as the price they must pay for their security – desperate to be defined as a friend and not the Other.

Viruben Nandakumar is a recent graduate from the London School of Economics, where he completed MSc in Political Theory. He also contributes to the online newspaper the Tamil Guardian and on his blog https://virubenn.wordpress.com/.