Indonesian society and Islam: Identity politics and the making of a majority 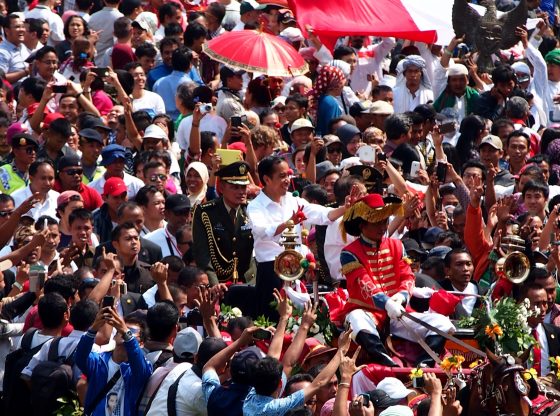 Muslim demands and movements calling for the elevation of sharia within the state legal structure, along with numerous mass mobilisations targeting religious minorities across Southeast Asia – and Indonesia in particular – seem to have surprised and alarmed many observers. Such demands and actions are often characterised as indicating the ‘radicalisation‘, ‘Islamisation’ or ‘sharianisation’ of the Indonesian state and its society.

Such characterisations are not particularly helpful, however. In order to provide a fair assessment of the current trends we need to take into account the deep-seated social cleavages and identities between the Muslim majority and non-Muslim minority communities in Indonesia, as well as the decades-old rivalries and conflicts (and occasional pragmatic coalitions) between the secular and religious elites.

Rather than focusing on religion (Islam), as is usually the case, we need to consider people’s identity formation and politics in order to understand why religious leaders are now eager and able to mobilise ordinary Muslim populations on such a large scale in the name of Islam – which the former view as being under threat. It is important to underline that there is nothing new in the general demands or claims being made by Muslims, whether in calling for popular adherence to sharia or hostility to non-Muslims (especially ethnic Chinese and Christians). Quite the contrary in fact.

Ever since the inception of modern Indonesia, Islamism has always been a powerful political force focusing on elevating the position of the majority faith – Islam – in the newly emerging state and legal structures. The Muslim religious elites (ulama or kiai) and Islamic movements, including the mainstream Nahdlatul Ulama (NU) and Muhammadiyah, demanded that the constitution of the new republic should enshrine and assure the Muslim community of the right to comply with sharia. These demands were raised primarily to attain a superior position for the Muslim majority in the constitution and state in a deeply divided emerging nation.

However, in contrast to the former colonies of the British Crown – Brunei and Malaysia – the dominant secular elites, especially in the person of President Sukarno, did not wish to give special privileges to the Muslim majority or to any specific community, not even ceremonially. Sukarno instead invented and propagated a multi-religious pluralist national identity, known as Pancasila.

In the following decades, the religious leaders who aspired and fought to upgrade the position of Islam within the state and national identity were steadily defeated – constitutionally, militarily and politically. Under the powerful authoritarian secularising regimes of Presidents Sukarno and Suharto, Islamists and Muslim leaders were socially and politically stigmatised as being an enemy of the unitary state of the republic. NU leaders were dubbed the ‘neo-Darul Islam (after a prominent Islamist movement which had rebelled against the central government) because they did not easily give up fighting for the promotion of sharia and Muslim interests in Parliament.

Afraid of being banned or denied access to state protection and patronage, however, mainstream Islamic movements had no choice but to compromise their ideological and political positions. They reluctantly pledged their sole allegiance to the state-sanctioned Pancasila, which they loathed as a secular regime’s tool to weaken Islam. Moreover, they decided to draw back from formal electoral politics to focus more on their religious missions (dawah), education and welfare activities in civil society simply in order to survive and protect their religious movements.

The consolidation of democracy since the fall of Suharto in 1998 has not altered their subordinate position in the structures of state power and the country’s modern economy dominated by non-Muslim (especially Chinese) business elites. In fact, religious leaders have come to believe that the state – especially the democratically elected President – has become even more secularly oriented and accommodating of non-Muslim minorities. Moreover, the religious and ethnic minorities have themselves become more assertive – and legitimately so – in demanding their political and cultural rights and equal status, as protected by the pluralist pro-minority presidents: Abdurrahman Wahid, Megawati Sukarnoputri, and newly re-elected Joko Widodo.

The result is growing insecurity and even resentment among the Muslim majority. They feel that they have already been marginalised – despite their numerical ‘majority’ status in the world’s largest Muslim nation – against a backdrop of thriving collective piety and identity, and socio-cultural conservatism.

The recent mass Muslim mobilisation called the Aksi Bela Islam (Action to Defend Islam) against the former Governor of Jakarta, Basuki Tjahaja Purnama, who was charged with blasphemy, as well as various other movements seeking to promote Islamic institutions should thus be understood as part of a collective struggle to claim domination and ownership of national identity and state power, which religious leaders perceive to be controlled by secular and non-Muslim elites.

In contrast to common assumptions, the secular domination and foundation of the Indonesian state have been consolidated even further under democratic rule, especially by the incumbent president Widodo, a politician from the secular-pluralist Indonesian Democratic Party of Struggle (PDI-P). Following Purnama’s political demise, Widodo swiftly implemented a number of laws and policies to strengthen the Pancasila ideology by subjugating alternative ideologies (specifically radical Islamism) which challenge the secular foundation of the state and its pluralistic national identity.

It is important to note that religious affairs remain under the exclusive purview of the central government, allowing the latter to deter any serious attempt to implement sharia (which primarily have been introduced by local governments), with the sole exception of the special region of Aceh. Furthermore, a number of judicial reforms over the last few decades have brought the already tiny jurisdiction of the Islamic courts and legal apparatus tightly within the purview of the secular Supreme Court – in stark contrast to the powerful and more independent sharia courts and laws established in Brunei and Malaysia. It is therefore not surprising that numerous so-called sharia-influenced by-laws have extremely limited jurisdiction both on paper and in practice, and in any event have hardly ever been implemented.

In short, the ‘radicalisation’ or ‘Islamisation’ of the Indonesian society and state is an overstated characterisation and a misleading assessment, although there is no doubt that religion has become more readily politicised.  Aggressive and occasionally violent mass mobilisations in the name of Islam in the past decade are better understood from the perspective of identity politics and competition in the deeply divided nation. The rise of Islamism is motivated by the increasingly strong collective identity, insecurity and resentment felt among the majority Muslim community, especially the religious elites, as well as the latter’s antagonistic reaction to the secular and pluralist domination of the state, modern economy and legal structures – consolidated even further under democratic rule.

Dr Kikue Hamayotsu is an Associate Professor of Political Science at Northern Illinois University and a Faculty Associate at the Center for Southeast Asian Studies. Her primary research interests and the majority of her publications focus on comparative democratisation, religion and politics, identity politics, and state-society relations in Muslim-majority states, especially in Southeast Asia.

A shifting paradigm? Politics in India against the backdrop of the parliamentary election
Excerpts from a voter’s notebook: Manifesto destiny