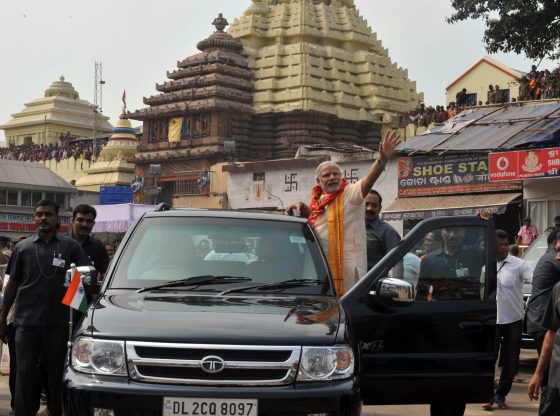 Every five years, Indian politics generates a crescendo of competing frenzied passions as nearly a billion eligible voters get their fingers inked at the poll booths during the general elections. Without a doubt, the current elections of 2019 mark a supremely important moment in the history of this postcolonial democracy.

For those of us who have been observing the deeply troubling developments since the Bharatiya Janata Party (BJP) led by Narendra Modi came to power in 2014, these elections hold unparalleled significance. This is because they will determine whether – and to what extent – India’s electoral democracy will be permanently captured by political profiteering on the right using the three biggest assets that the BJP currently holds: media, money and majoritarianism. All three of these are personified in the figure of Modi himself.

Let us look first at the role of the media. The last few years have seen an increasing backlash against democratic dissent, which is labelled ‘anti-national’, and this has been accompanied by a decline in press freedom in the world’s largest democracy. Journalists, secularists, atheists, rationalists and various other critics of the regime have faced everything from defamation to assassination under BJP rule, and we have now reached a situation where hyper-nationalist Modi supporters proudly call for a ‘New India’ where dissent will be muzzled and dissenters silenced.

With very few exceptions, most media houses have (self-)censored themselves against making too sharp a critique of Modi’s rule, and the Prime Minister has not addressed a single traditional press conference during his entire tenure. The political accountability that ought to come from direct questioning by the media has been replaced by a propaganda-style relaying of images during the Prime Minister’s global travels, reinforcing in the minds of numerous Indians the idea that India’s leadership is now taken seriously worldwide.

Alongside this, there has been a strategic silence, bordering on complicity and encouragement, when it came to the most egregious instances of anti-minority violence within the country.

The hagiographic worship of Modi has continued unabated and without any correlation to policy successes when it comes to unemployment, the economy or human security. The role of Bollywood has been noteworthy in this, with numerous celebrities taking it upon themselves to denounce any opposition to their leader and his party, both of which are bizarrely presented as the only viable alternative in a country of incredible diversity. Modi has been mediatised as the only strong leader who can protect and promote the interests of India.

Let us turn next to money. While the use of finance to influence political outcomes in elections is not unique to India, it is remarkably effective in this case. These elections have seen the controversial use of electoral bonds, most of which have gone to the BJP. There have also been several instances where it has been alleged that the financial misdemeanours of the opposition were selectively targeted while going easy on similar practices by the BJP.

In the 2014 elections, Modi’s corporate backers from Gujarat played a key role in his election victory. There is nothing to suggest that something similar may not be on the cards again. Various business leaders have praised Modi for being an effective brand manager for the country while they themselves have benefited from entrenched crony capitalism.

Finally, majoritarianism. The question of the minorities has become a watershed for the future of India’s democratic trajectory. Anti-minority-ism is a hallmark of the BJP, and Modi has maintained complete silence while lynching, bullying and hate speech against Muslims, Dalits and others have been carried out very publicly by Hindu nationalists, who are then rewarded by the party leaders. To wit, the BJP has fielded Pragya Thakur – a terror accused Hindutva proponent – as an electoral candidate, and one of its MPs, Sakshi Maharaj, has openly, and approvingly, stated that should the BJP come to power again, India will not see the next elections.

A de facto disenfranchisement of religious minorities has gone hand in hand with rampant Islamophobia in public life and violence against Muslims. Modi’s admirers see him as a strong Hindu leader who will end the alleged appeasement of minorities by secularists, and all of Modi’s speeches, actions, even silences buttress this image.

In sum, then, what unites the role of media, money and majoritarianism in these elections is the figure of Narendra Modi, projected as the only strong leader who can deal with security and the other challenges faced by India today.

These elections have become centred around Modi vs non-Modi, even as the contradictions and ironies thrown up by the outgoing BJP government are aplenty. Human security has been a casualty of Modi Rule, with the unemployment statistics being the worst in several decades; yet he is represented as the only one who can bring security to India. National security has been made into an electoral campaign issue in an unprecedented manner by a party that has overseen the most insecurity-producing regime (for a great number of people from farmers to students) in recent years.

The issue of Kashmir has become central to electoral campaigning in India in the wake of the spectacular attacks in Pulwama and the subsequent Balakot strikes, as well as the strident insistence of BJP leaders that they would repeal articles 370 and 35A of the Constitution relating to the jurisdiction of Kashmir. And yet there is no debate around the government’s complete failure in terms of exacerbating violence in Kashmir.

At the same time that the political dispute and human tragedy of Kashmir and the Kashmiris has been weaponised as an electoral issue in India, the elections in the Kashmir Valley could only be conducted subject to the availability of a large number of uniformed forces and resulted in a turnout so low that it was in single digits in many constituencies: 17, 90 and 65 polling booths, respectively, recorded zero votes in each of the three election phases in Kashmir.

While foreign media organisations have questioned the veracity of claims about successful strikes against Pakistan early on in 2019, Modi presents himself as the only leader who has the audacity to attack Pakistan. A Prime Minister who has failed to provide economic, social, political and human security to the majority of Indians is represented as the only strong leader who can provide security to a resurgent New India.

Modi Rule in India is following the contemporary global template of electorally legitimated authoritarianism that claims a monopoly on nationalism and presents itself as challenging neoliberalism while facilitating crony capitalism. The results of the current elections will be vital in determining whether India might have reached a point of no return in its slide away from a secular democracy into illiberal quasi-democratic authoritarianism.

The money- and media-fuelled majoritarianism of the Modi-led BJP has been manufactured at the grassroots level painstakingly and over time in the most organised manner by the Rashtriya Swayamsevak Sangh (RSS) – the BJP’s paramilitary volunteer organisation – and the Sangh Parivar organisation. Nonetheless, the despair inducing ascendancy of such an ideological politics may still find its antidote in regional diversities and disparities of interest.

Notwithstanding the overwhelming propaganda drive of the BJP machine, and despite having spent the last few weeks in different parts of India, I find it very hard to foresee with certainty the outcome on 23 May. Regional, caste, religious and class dynamics may throw up results that will surprise everyone in the end.

Nitasha Kaul is an Associate Professor of Politics and International Relations at the Centre for the Study of Democracy, University of Westminster, London. She Tweets @NitashaKaul.

A tale of two Huangs
Successful engagement with China in an educational context: A BACS-Asia Research Institute Round Table