The Islamist threat and democratic deconsolidation in Indonesia 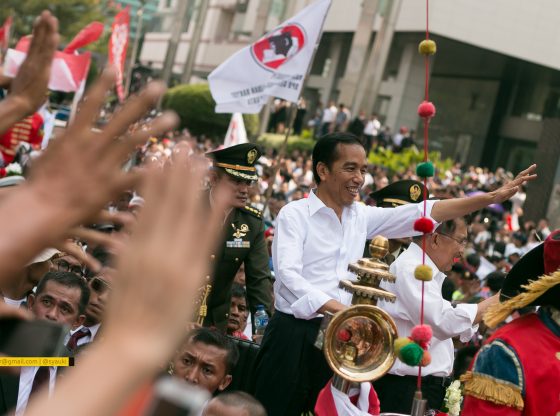 Indonesia has witnessed a rise in Islamic conservatism over the last three decades. This is reflected not only in the increasing consumption of Islamic commodities, but also through the escalating use of Islamic identity politics in electoral contests. The Defending Islam rallies during the 2017 Jakarta gubernatorial election against the incumbent candidate Basuki Tjahaja Purnama (widely known as Ahok) on the basis of a blasphemy case is one of the more notorious recent examples in the political arena.

However, what is important in this regard is the way that the administration of Indonesia’s President Joko Widodo (popularly known as Jokowi) has responded to the growing anti-democratic activism of Islamist groups.

What Jokowi did in response to the Islamists does not mark the beginning of an authoritarian turn or democratic deconsolidation, but it does accentuate the illiberal tendency of Indonesian democracy

Jokowi has used an approach of both accommodation and repression to weaken the influence of conservative Muslim leaders and the consolidation of the Islamic populist alliance. The appointment of an ultra-conservative Muslim cleric – Ma’ruf Amin, head of the quasi-state institution the Indonesia Ulama Council (MUI), who issued a religious opinion (fatwa) on the Ahok blasphemy case – as Jokowi’s running mate in the 2019 presidential election is an example of the accommodative approach.

Jokowi also gave a number of positions in his administration and campaign team to key figures within the Islamist groups: Ali Muchtar Ngabalin, who was previously a staunch critic of Jokowi, was appointed as a member of the presidential staff, while Kapita Ampera, a former advocate of Rizieq Shihab (patron of the Islamic Defender Front (FPI) and the central figure of the Defending Islam rallies) was recruited as a cadre in Jokowi’s nationalist Indonesian Democratic Party-Struggle (PDI-P).

Meanwhile, Jokowi has also introduced a number of repressive measures. For example, he has used accusations of criminal offences to target key figures in Islamist groups – including Rizieq Shihab, who has been in exile in Saudi Arabia since being charged with a pornography scandal in 2017. Jokowi also issued a controversial regulation in lieu of law on mass organisation that removes judicial process in disbanding organisations considered to contradict the national ideology of Pancasila. Not long afterwards, his administration banned Indonesian Hizbut Tahrir (HTI), one of the main organisers of Defending Islam rallies, for promoting an anti-Pancasila narrative.

Some pro-democracy activists, especially supporters of the government, argue that Jokowi’s actions, in particular his repressive approach, are an acceptable response to address the threat from the Islamic populist alliance. Their argument rests on the ‘militant democracy’ paradigm, which suggests that religious intolerance cannot be tolerated and democracy should defend itself against its enemy using any means necessary.

Some scholars believe that such approaches – dubbed by Marcus Mietzner as ‘fighting illiberalism with illiberalism’ – will open the road to the deconsolidation of democracy in Indonesia. Others, meanwhile, describe it as a symptom of Indonesia’s authoritarian turn or the return of a neo-New Order.

However, the approach used by the Jokowi administration is not destroying democracy. On the contrary, it is maintaining and reproducing illiberalism that makes room for the rise of Islamic conservatism in Indonesia. What I mean is that democracy in Indonesia was never liberalised or consolidated in the first place, as imagined by those scholars referred to above. Likewise, from the very beginning of his term in office in 2014, Jokowi’s administration  never represented the victory of pro-democratic forces over the oligarchs.

With this in mind, what Jokowi did in response to the perceived Islamist threat should not be seen as the beginning of a new phase of democratic regression. Instead, it is because Indonesian democracy has already been destroyed, being fuelled by money politics and predation, that there is only a limited number of options for addressing the anti-democratic activism of the Islamic populist alliance.

Mietzner admits that all imaginable approaches, whether repressive, accommodative or a combination of the two – just as Jokowi’s were – are not effective in weakening the Islamist threat. The high number of votes gained by the Islamist Prosperous Justice Party (PKS) shows that repressive measures have indeed fuelled the anger of conservative Muslims and so helped to consolidate their movement.

Meanwhile, the accommodative approach, as seen in the appointment of Ma’ruf Amin and the alliance with other Islamic groups that represent ‘moderate Muslims’, has made the exclusionary-religious narrative even more pronounced in public life. And the percentage of votes gained by each candidate in the 2019 presidential election has not changed much compared with the 2014 results, affirming the ineffectiveness of Jokowi’s approach in undermining the influence of the Islamists.

But that is exactly the problem, in the sense that there are only three options for addressing Islamic radicalism and religious intolerance, which threatens the very survival of liberal democracy.

Indeed, many studies have shown that the rise of right-wing populist politics in many parts of the world could be seen as a symptom of democratic shortcomings, where its formal representative institutions have failed to channel the interests of the citizens. More importantly, the alternative channel or vehicle available is also limited. Specifically, the disorganisation of progressive elements in society contributes to making more space available for the xenophobic narrative employed by demagogues to exploit the discontent of the precarious lower and middle classes.

In Indonesia, since the destruction of the left in 1965 that paved the way for the emergence of the 32-year rule of an authoritarian regime, there are only two main sources of mobilisation: nationalism and religion-based politics. Forces resistant to change in Indonesian politics work to maintain such a condition and ensure the absence of an alternative progressive movement by reproducing an anti-communist narrative. Meanwhile, political parties have long been detached from their social bases. Consequently, since the beginning of the post-authoritarian era, political mobilisation in electoral contests relies heavily on money politics and the politicisation of religious and/or ethnic sentiments.

What we see today therefore regarding the rivalry between ultra-nationalist elements and the Islamic conservative alliance is the legacy of the political reality post-1965, which is not at all surprising. Similarly, what Jokowi did in response to the Islamists does not mark the beginning of an authoritarian turn or democratic deconsolidation, but it does accentuate the illiberal tendency of Indonesian democracy.

Abdil Mughis Mudhoffir is a PhD candidate in politics at the Asia Institute, University of Melbourne. He is also a lecturer in the Department of Sociology at the State University of Jakarta and a research associate at LabSosio, Sociological Research Centre, University of Indonesia.