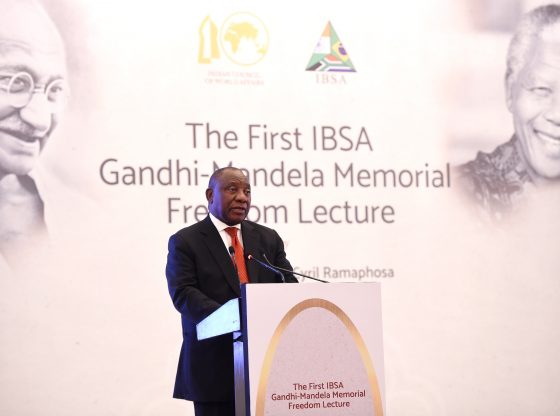 In 2018 we celebrated the centenary of the birth of Nelson Mandela, and 2019 will mark the 150th anniversary of the birth of Mahatma Gandhi: two eminent leaders who represent the shared history of their respective nations, South Africa and India. These two countries have shared close ties over the years, not least in the form of the two Congress parties – the Indian National Congress (INC) and the African National Congress (ANC) – which represent the ideals of these two great leaders.

General elections are currently being held in both India and South Africa, and the Congress party in each of these countries is facing severe challenges. The ANC needs to retain the confidence of the people, while the INC is striving to reassert itself after a period in opposition. Both Congress parties face very similar challenges in order to form the next government, not least because, as emerging economies, there are many commonalities in terms of each country’s socio-economic diversity.

The manifestos of both Congress parties reflect not only the shared challenges between the two countries, but also their leaders’ immaculate clarity and vision for tackling them

Then there is the Non-Performing Asset (NPA), which represents the sum of all stressed assets held by the main lending institutions in the country and is recognised by the International Monetary Fund (IMF) as a sound economic indicator. In India this stands at 9.85 per cent, although South Africa fares better at 2.83 per cent. Aside from the unethical practice of evergreening loans, intended to conceal the actual status of accounts or to evergreen the stressed accounts by the lending institutions, the Estina Dairy project scheme in South Africa and the Sarada Chit-Fund case in India are prime examples of asymmetric information in the financial markets, resulting in the disproportionate ballooning of the NPA.

The two countries are both signatories of the United Nations Sustainable Development Goals (SDG), with a commitment to achieve 17 development goals and 169 targets in order to address key challenges such as poverty, inequality and gender disparity in all forms and lead to economic, social and environmental development.

Women’s empowerment in South Africa and India is also sorely needed. There are many ways to define the word ‘empowerment’, of course, but according to the World Bank and its agencies: ‘Empowerment is the expansion of assets and capabilities of poor people to participate in, negotiate with, influence, control, and hold accountable institutions that affect their lives.’ In other words, it means increasing the participation of marginalised or vulnerable sections of society in the decision-making that affects their lives.

Women constitute 50 per cent of our population yet they are marginalised in the society and forced to live with decisions made by their male partner, who hinders their absolute freedom to participate in varied aspects of the economy in particular, and society in general. The endurance of gender inequality has been most starkly brought into the public domain by the term ‘Missing Women’. The term was coined by the renowned economist Amartya Sen in a contemporary classic article in the New York Review of Books to highlight the unfavourable sex ratio vis-à-vis  women.

Research has shown that while a woman may have control over her income or decisions in her household, she may be hesitant to participate in political meetings or engage in collective action because of her sex, ethnicity, caste, race or social status. Women’s reservation in public decision-making bodies is therefore essential for the injustices meted out to women on a regular basis. India can follow the model of South Africa, where seats are reserved for women at the party level. South Africa boasts of having 42.7 per cent women in the Lower House and 35.2 per cent women in the Upper House of its National Legislature (Parliament), whereas in India there are a mere 11.4  per cent women in the Lower House (Lok Sabha ) and 11.4 per cent in the Upper House (Rajya Sabha).

Despite the country’s economic growth, poverty in South Africa is still at a high level. Almost 55.5 per cent of people live below the upper-bound poverty line (UBPL) in South Africa, while in India an estimated 21.9 per cent of the population live below the national poverty line. The INC has announced a Universal Basic Income (UBI) in its election manifesto, which is set to provide INR 72,000 per annum to the 20 per cent poorest people, covering 50 million households and 250 million people in India through the Nyuntam Aay Yojana (NYAY) minimum income scheme.

The INC also promises to abolish application fees for government examinations and government posts and to provide fiscal incentives to any business that employs a certain percentage of women, in order to increase women’s employment. Further tax rebates and incentives will be provided to the export sector in order to generate more jobs, and the Tourism Development Bank has also been highlighted as a means to develop the tourism sector and create jobs.

There is growing frustration in India against the ruling Bharatiya Janata Party (BJP), and this will work to the INC’s advantage. In the 2014 election campaign, the BJP promised to provide 2 crore (20 million) jobs each year, but the NSS report, despite its stalled release, reveals that the period 2017–2018 registered the highest unemployment rate for 45 years.

The same report also revealed the decreasing level of workforce participation, which can be understood as a scar of demonetisation. Dr Manmohan Singh, the renowned economist and former Prime Minister of India, has rightly observed that demonetisation has had a direct negative impact on employment, as the country is struggling to create job opportunities for the youth.

The ANC identified similar challenges in its own manifesto. South Africa is expected to amend its National Minimum Wage scheme, which was reported to have benefited 6.6 million people, and bring another 9.25 million non-economically active people within its ambit. Further, Cyril Ramaphosa, the current President of South Africa, has promised the creation of 275,000 additional jobs each year along with free education for the poor and working class and free study material for students qualifying for Technical and Vocational Education and Training (TVET) and public universities. The National Health Insurance scheme is also a praiseworthy measure to ensure public access to healthcare facilities, particularly for the underprivileged and downtrodden sections of society.

As can be seen from the above, the daunting and debilitating state of the economy, fragile financial institutions, high unemployment, massive prevalence of poverty and injustices faced by women are just some of the major challenges which can be observed in both of these emerging economies. Both the ANC in South Africa and the INC in India have, time and again, shown resilience, courage and innovation to find new opportunities in trying times, and they have taken commensurate measures to handle them effectively and efficiently with the limited resources at the nation’s disposal.

As we complete this second decade of the twenty-first century on the eve of the Fifth Industrial Revolution (the era of artificial intelligence), the ANC and the INC must attempt to address similar issues which are critical for the development of their respective countries. The manifestos of both Congress parties reflect not only the shared challenges between the two countries, but also their leaders’ immaculate clarity and vision for tackling them and their inclusive approach.

Utsav Kumar Singh is an Indian Council of Social Science Research (ICSSR) Post-Doctoral Fellow at the Department of Political Science, University of Delhi. He is currently working on the project From Millennium Development Goals to Sustainable Development Goals: A Case Study of India and South Africa. He Tweets @utsavkumarsingh

Freddie Mercury in China
Malaysia today: The demise of a hybrid? Not so fast…