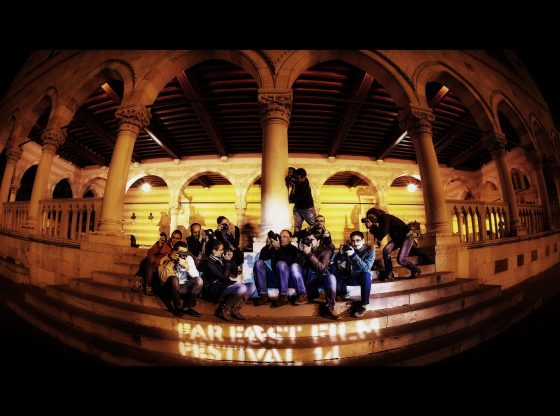 How is the Chinese film industry doing? The Far East Film Festival (FEFF) held in Udine (Italy) each year in late April is a good opportunity to reflect on this question, because the Festival focuses on the mainstream commercial films regular audiences watch at home rather than specialist art films.

And what a year it’s been! China’s film industry is on a rollercoaster ride of rapid growth accompanied by sudden lurches and dips caused by government intervention. However, it would be a mistake to think the government is trying to attack the industry. Rather, it is trying to take back control – to coin a phrase – but without killing the goose that lays the golden eggs.

Although Chinese cinema may be thriving, it is not being exported

FEFF hosted a delegation from the China Film Association (CFA). They brought along the first English-language edition of their annual Research Report on the Chinese Film Industry. Filled with impressive statistics, this useful booklet sends out a positive message. On the very first page, it notes that while the 2018 global box office is up 1.2 per cent and the United States box office is up 7 per cent on 2017, the Chinese box office leads the way with 9.06 per cent growth.

China remains the second most valuable market in the world, and it is rapidly catching up with the United States. There are now more Chinese movies produced than ever, with 902 feature films made in 2018, of which 398 were shown in cinemas. There are also more cinemas, more screens, more audiences, and so on.

However, China’s share of the global box office increased by less than 1 per cent in 2018, and behind this slowdown are what the report likes to call ‘adjustments’. Readers may recall the shock disappearance of China’s most famous and bankable female star, Fan Bingbing, on 1 July last year. Her erasure was reported around the world. The Hollywood equivalent would be Kim Kardashian’s social media accounts being closed down overnight. Three months later, Fan apologised for ‘tax irregularities’.

Deep inside the CFA report, on page 44, we find the bigger story behind Fan’s misfortune: ‘On 27 June 2018, national authorities and functional departments released a Notice on Addressing Problems Such as Sky-High Remuneration of Stars, “Double Contracts for the Same Work – Yin Yan Contracts” and “Tax Evasion” in the Film and Television Industry’. The disciplining of Fan Bingbing is only the most prominent example of a wider pattern. According to the report, the result has been a rectification leading to the withdrawal of ‘disorderly capital and hot money’ from the industry (p.45). In other words, if you are a Chinese filmmaker, it is harder to get investment just now.

Disciplining the film industry takes not only an economic form. At the end of March 2018, it was announced that the State Administration of Press, Publishing, Radio, Film and Television (SAPPRFT) would be scrapped, and that the film industry would be placed under the direct control of the Chinese Communist Party (CCP) Department of Propaganda.

Interestingly, the CFA report omits this development, and no command economy five-year-plan model has returned. But in February 2019, China’s most famous director Zhang Yimou’s latest film was suddenly withdrawn from competition in the Berlin International Film Festival for ‘technical reasons’. Called One Second (‘Yi Miao Zhong’), the film is set during the taboo period of the Cultural Revolution (1966–1976). Months later, it remains unreleased, and no one believes the ‘technical reasons’ excuse.

Indeed, if we look at which films are topping the Chinese box office today, there is a clear retreat towards safer and more ‘patriotic’ topics. A few years ago, the big winners were comedies like Lost in Thailand (‘Ren Zai Jiongtu Zhi Taijiong’, 2012) that satirised the materialist greed that has overtaken China.

Exposing problems and poking fun are no longer quite so popular, however. Instead, action movie celebrations of China’s global military power like Wolf Warrior 2 (‘Zhanlang 2’, 2017) and Operation Red Sea (‘Honghai Xingdong’, 2018) are topping the box office. This year’s box office leader so far, The Wandering Earth (‘Liulang Diqiu’), is a sci-fi film that takes the exaltation of Chinese power to new dimensions. Its Chinese hero literally saves the planet, moving it away from a rapidly expanding sun.

The Wandering Earth was not shown in Udine this year, but those popular films which were confirm the new conservatism. Dying to Survive (‘Wo Bu Shi Yaoshen’) was No.3 at the Chinese box office last year. It tells the story of a Chinese businessman who smuggles in cheap Indian generic anti-leukaemia medication and finds himself sued and jailed, but he becomes a hero on the internet.

At first, the film might appear to be a criticism of the Chinese medical insurance system. But it is set in the early 2000s, well before current leader Xi Jinping came to power. Indeed, in line with Xi’s own populist rhetoric, the film’s indignation is directed at the foreign companies and their fat cat Chinese agents behind the expensive medication being sold on the Chinese market. Furthermore, an end title reveals that the real-life businessman was quickly released and the insurance rules changed to make the drug cheaply available. Result: numerous lives saved, thanks to the wisdom of the government and the Party. Even The Rib (‘Leigu’, 2018), a somewhat heavy-handed depiction of the challenges faced by transgender people in China, plays the same game, ending with a title that lists changes to the laws and rules enabling gender changes on ID cards, and so on.

Indeed, the Chinese films screened at Udine this year confirmed one other important lesson from the CFA report. Although Chinese cinema may be thriving, it is not being exported. For Chinese filmmakers, whose undisguised ambition is to go global, this must be frustrating.

Foreign audiences are not attracted by displays of Chinese power, making it difficult to export films like Operation Red Sea and Wandering Earth. Films like Dying to Survive show that Chinese filmmakers have adopted and adapted all the Hollywood storytelling tricks. But the overarching ideological conformity undermines their appeal. If every movie criminal is always caught, every hospital is always shining clean, and every policeman is always incorruptible, not only is credibility weakened, but dramatic interest is also lost.

Chris Berry teaches Film Studies at King’s College London. His research is grounded in Chinese-language cinemas, and he is the co-editor with Lu Fei-i of the anthology on Taiwanese cinema Island on the Edge: Taiwan New Cinema and After (Hong Kong University Press, 2005).