Imagining the countryside in Chinese cinema 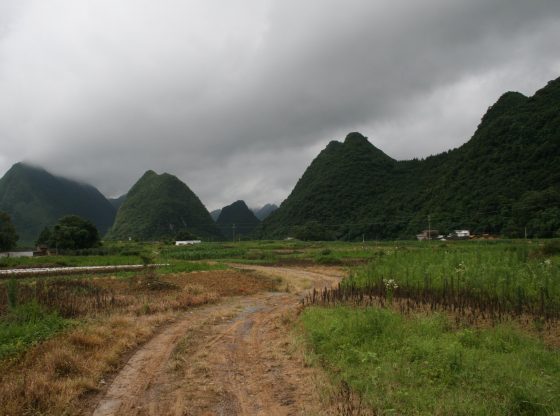 The cinematic image of the Chinese countryside often appears to be uncultured and uncivilised, ‘a place of danger and threat.’ On the other hand, it is also often idealised and romanticised as an idyllic location or experience that is associated with ‘authenticity’ and the essence of Chinese culture and ‘Chineseness’, providing an escape from the pressures of urbanisation. These two strands of imagining the countryside are deep-rooted and persistent, from the very early stages of Chinese cinema through to more recent Chinese films.

The image of the idyllic countryside has long been present in the Chinese imagination. Twin Sisters (Zheng Zhengqiu, 1933), The Goddess (Wu Yonggang, 1934) and Street Angel (Yuan Muzhi, 1937) are just a few examples, conveying a strong anti-urban message to inspire defection from the city. Films such as Peach Blossom Weeps Tears of Blood (Bu Wancang, 1931), Small Toys (Sun Yu, 1933), The Big Road (Sun Yu, 1933), Fisherman’s Song (Cai Chusheng, 1934) and Song of China (Fei Mu, 1935), meanwhile, typically depict a romanticised view of the countryside as an unspoiled and unpolluted space.

If the anxieties of the Chinese nation and home are articulated in Small Toys through the stark contrast between the city and the countryside, and are intensified by the image of the suffering woman and her broken family, they find further expression in Fei Mu’s Song of China, which sees the resolution of returning to the countryside as a culturally significant event.

However, there is no one-sided outcome with regard to the city–countryside relationship. Indeed, Jay Leyda observes that most protagonists are simply peasants forced to leave their village miseries to endure city miseries. As other research also indicates, some peasants choose to return to the countryside simply because the city miseries turn out to be more unbearable than the miseries of the village.

If the feelings and emotions attached to the countryside in the first half of the twentieth century are more likely the result of intensified conflict born out of quasi-colonial occupation and Chinese modernisation, then what has been repeatedly  conveyed through the Chinese countryside films made during the 1980s and 1990s is the nationwide reaction to the scars of the Cultural Revolution. Nevertheless, different filmmakers have approached the event differently, and the countryside has played different roles in the thrust of post-Cultural Revolution critical reflection.

Filmmakers such as Xie Jin did a great deal to ‘undermine the moral legitimacy of the Communist Party’ by depicting the countryside as a ‘healing place’ for those who endured severe suffering and abuse during the Cultural Revolution. His sensational melodramas The Legend of Tianyun Mountain (1980), The Herdsman (1982), Hibiscus Town (1986) and An Old Man and His Dog (1994), while arousing viewers’ emotions by showing the ruthless persecution and painful experience imposed on family members, also reinforced the myth of the peaceful, harmonious, tranquil and idyllic countryside, as well as the generous kindness embodied by country dwellers. Such a myth, however, has been demolished and subverted by some of the seminal Fifth Generation and Sixth Generation films.

Films including Chen Kaige’s Yellow Earth (1984) and The King of Children (1987), as well as Zhang Yimou’s Red Sorghum (1988), The Story of Qiuju (1992) and To Live (1994) showed a more negative and depressing vision of the Chinese countryside, associated with a lack of culture and civility, endemic poverty, struggle and repression.

Although these films appeal to Western tastes – winning awards at international film festivals – in China itself they were often criticised for exaggerating the dark side of China by portraying the countryside and Chinese society overall in an undesirable way, and for exporting ‘negative’ images of China to international audiences.

Nevertheless, these negative images have to some extent continued with Sixth Generation filmmakers too. For example, Guan Hu’s Eyes of a Beauty (2003), Cow (2009) and Design of Death (2012), as well as Wang Quan’an’s White Deer Plain (2012) have offered a critical view of the feudal-patriarchal system and ideology dominating Chinese countryside – with a particular focus on the struggle of rural women.

The backwards and uncivilised countryside has also offered inspiration for the rise and development of the crime-thriller film genre, in which the countryside is portrayed as a place which fosters crime, and rural migrants are held responsible for increasing levels of crime in the city – a testament to the loss of social cohesion at the heart of this process.

The ‘rural’ has for a long time been a significant driving force behind the Chinese government’s ideology of state-making and nation-building, as it formed the essence of socialism. However, today the countryside is something that people look to escape from rather than embrace.

A paradox thus arises: under processes of strong economic growth and the ‘opening up’ of China to the world outside, the old ideas can no longer be easily supported. Accordingly, in recent years the rural has essentially become ‘invisible’ – most modern films and TV shows, for example, celebrate ‘urbanity’ and appeal to urban tastes. Young rural people want to move to the cities, and young urban people do not care about the countryside.

In the media, rural migrants are often stereotyped as either poor and naïve outsiders in the city, or a threat to civilisation. This is a contrast to the image of the revolutionary peasant in Maoist-era China. The nature of life in contemporary rural China does not carry wide appeal to audiences or attract media coverage, and this perhaps can explain the increasing invisibility of the countryside in Chinese cinema today.

Dr Qijun Han is an Associate Professor in the School of Foreign Languages at Nanjing University of Science and Technology.

The Chinese film industry’s rollercoaster ride
Does China want to globalise the renminbi?