Indian elections 2019: women candidates to watch out for 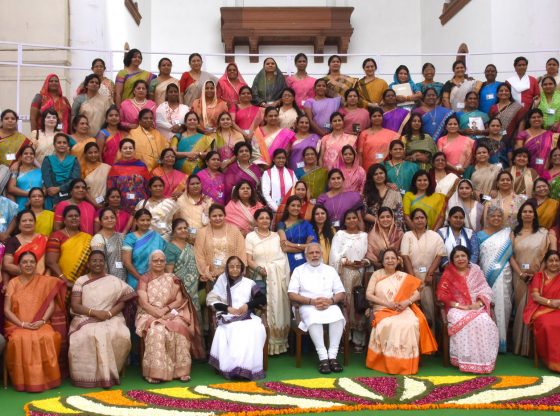 *This article is republished from The Conversation
The original date of publication: 21 May 2019

The outcome of the world’s largest election is almost upon us – the counting of votes by 900 million eligible voters begins on May 23. With more than 500 directly elected seats being contested in India’s lower house of parliament, the Lok Sabha, all eyes are on who will win and what this means for the next government.

One hope is that India’s lower house of parliament will improve upon the meagre number of women MPs elected to date. A depressing statistic revealed in Performing Representation, a book I co-authored with Shirin M Rai, is that if you count every woman MP elected to the Lok Sabha over every parliament since independence, these together would not fill a single Lok Sabha of 543 directly elected seats. This is despite the prominence of several senior women leaders in Indian politics and the fact that women make up between one third to one-half of local government representatives around the country as a result of gender quotas implemented in the 1990s.

Nonetheless, there are many women politicians that we should look out for. Of the 8,000+ candidates, there are more than 700 women – proportionally slightly higher than in previous elections.

On May 23, when the results are announced, it won’t just be a question of how many women were elected. If we are to do justice to the diversity of women in Indian politics, we must also consider who the women are, where are they from, which party they represent, and what they seek to represent in parliament.

There are two women candidates who have captured the public imagination in this election. They illustrate, for very different reasons, why the last six weeks of voting have been dubbed a toxic election.

One is a progressive candidate, Atishi Marlena, contesting in East Delhi for the Aam Aadmi Party. She has been widely praised for her contribution to reforming government schools in Delhi as an adviser to the government, improving the quality of both teaching provision and infrastructure. But, as many women in politics sadly experience, she has also been subjected to some severe misogynistic and casteist abuse on the campaign trail.

Atishi is not the first woman candidate to experience such abuse, even during this election. But her experience is a stark reminder of how poisonous electoral politics can be and why many women are put off careers in politics.

In contrast, the controversial Sadhvi Pragya Singh Thakur is contesting for the BJP in the city of Bhopal, in the Hindi heartland state of Madhya Pradesh. She is a Hindu holy woman and member of the Hindu nationalist volunteer organisation, the RSS, which has links with the governing BJP party. Her nomination was heavily criticised because of her alleged links to the 2008 Malegaon bombings, for which she was arrested but granted bail on health grounds in 2017.

She courted further controversy when she referred to Mahatma Gandhi’s assassin, Nathuram Godse, as a ‘patriot’ (deshbhakt). Senior BJP leaders condemned these remarks saying that this is not in line with party ideology, but they have not rescinded their support for her

Her victory or defeat in the election will serve as a litmus test for the level of public support for the BJP’s right-wing Hindu nationalist majoritarian agenda, and the extent to which parties and voters are willing to overlook alleged criminal behaviour of candidates.

Some of the most prominent women in the 2019 election are not candidates but are leading their party campaigns. This includes the chief minister of West Bengal and head of the All India Trinamul Congress party, Mamata Banerjee, who has been fighting hard this election to prevent the BJP from gaining strength in her state of West Bengal.

Another is the head of the Bahujan Samaj Party, Mayawati, in the northern, most populous Indian state of Uttar Pradesh. She has entered into an alliance with her opponent, the Samajwadi Party, in order to fight the governing BJP party and avoid splitting the anti-BJP vote.

Both Mayawati and Banerjee have directly confronted incumbent prime minister, Narendra Modi in their campaigns, and will likely play an important role in the immediate aftermath of the results.

We know that almost two-thirds of sitting women MPs are running again in 2019. This is significant because Indian politics has a high turnover of elected representatives. The male-dominated terrain of party politics in India, as well as a perception that men have higher ‘winnability’ within party selection committees, means it is significant when women are re-nominated by their parties.

Prominent women MPs to look out for are Meenakshi Lekhi (BJP) from Delhi, Supriya Sule (NCP) from Maharashtra, Susmita Dev (Congress) from the northeastern state of Assam. They are among a newer generation of senior women political leaders from across the political spectrum

After passing the leadership of the Indian National Congress Party to her son Rahul Gandhi, four-term veteran Sonia Gandhi is contesting again in Uttar Pradesh. Other veterans who lost in 2014 have been given another chance by their parties in 2019. Meira Kumar, former speaker of the Lok Sabha (2009-2014) is back, fighting for her former constituency in the northern state of Bihar. Sheila Dikshit, a three-time chief minister of Delhi (1998-2013) and former MP, is again contesting in Delhi for the Congress party.

National media coverage of Indian elections is often dominated by north Indian politics, but women candidates from south India are also worth watching. The south has higher development indicators, but this has not always led to women’s participation in politics.

The low number of women nominated by major parties in these states in 2019 means this trend is likely to continue. This will be the first election in decades without J Jayalalithaa, the longstanding chief minister of Tamil Nadu who died in December 2016. But we may see incumbent MP and senior TRS leader Kavitha Kalvakuntla, contesting in the state of Telangana, return to parliament. There are also two women Congress candidates, Jothimani (in Tamil Nadu) and Ramya Haridas (in Kerala), who may not have garnered much national media coverage but are interesting candidates to watch out for.

Patriarchy in practice: The predicament of women in Pakistani society
Tourism vs. remittances: The impact of the Easter attacks on Sri Lanka’s foreign exchange earnings