Tourism vs. remittances: The impact of the Easter attacks on Sri Lanka’s foreign exchange earnings 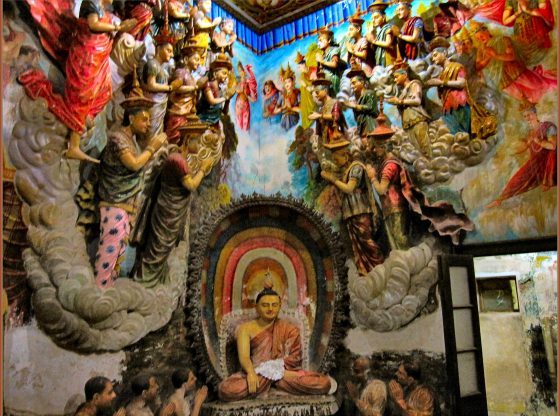 Sri Lanka was only a few days short of celebrating a decade of peace since the end of the 30-year separatist conflict when a series of horrific attacks shocked the nation. The Easter Sunday attacks on churches and tourist hotels claimed more than 250 lives and injured another 500 or more innocent people.

The terrorists struck at a time when the country was too complacent with regard to national security, and border control measures were lax. Indeed, a new on-arrival visa scheme was scheduled to be implemented from 1 May 2019, with the hope of boosting the tourism industry and allowing it to capitalise on Lonely Planet identifying Sri Lanka as the top country to visit in 2019.

At the same time, in terms of emigration, the concentration of Sri Lankan migrants in the Middle East (ME) and the growing significance of Sri Lanka’s Eastern Province as a sending region were overshadowed by international remittances dominating foreign exchange earnings. This blog links the Easter Sunday terrorist blasts to border control and foreign exchange earnings for tourism and remittances.

As shown in Figure 1, remittances had stabilised in recent years, while 2018 recorded the second consecutive year of negative growth in remittances. Reasons for the decline in remittances include the prevailing geopolitical uncertainties of oil price fluctuations and sluggish global economic growth, a decline in departures for foreign employment in the Middle East due to improvements in domestic labour market opportunities, and government efforts to curb migration for specific occupations and skills categories.

Meanwhile, earnings from tourism increased by 11.6 per cent in 2018. This growth in tourism income was fostered by the highest ever growth in annual tourist arrivals, which recorded a 10.3 per cent increase to reach 2.3 billion arrivals in 2018. Many factors, such as endorsements and accolades from reputed international tourism organisations, aggressive promotion campaigns, an increase in investment in the tourism industry, relatively free movement across the border, and better connectivity through air and sea routes, have contributed to this impressive performance in Sri Lanka’s tourism industry. Before the attacks, the sector was poised to grow even further, reaching out to the remaining untapped segments of the global tourism market. 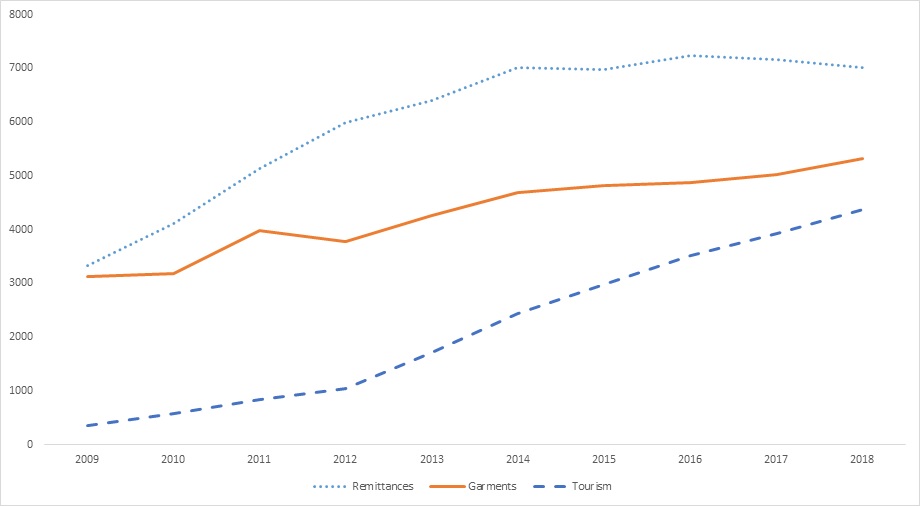 The impact of the attacks on foreign exchange earnings

The locations of the attacks on Easter Sunday are eerily connected to foreign exchange earnings. The blasts at the three tourist hotels in Colombo killed both local and foreign patrons; these were prominent, luxury hotels, frequented by wealthy travellers to Sri Lanka.

Although bombs went off in only three hotels, the entire tourism industry was dealt a severe blow. This is because, as the UN World Tourism Organisation (UNWTO) notes, ‘more than any other economic activity, the success or failure of a tourism destination depends on being able to provide a safe and secure environment for visitors’. Despite the remarkable resilience of the sector, high levels of international support, and a number of proposed government initiatives, the prospects for the tourism industry remain bleak in the short run.

Ironically, the immediate prospects for remittances now look more favourable, given that these are a common source of transfers which can be well targeted and speedily disbursed to enable the smoothing of consumption during times of financial difficulty. In addition to the cost of sudden funerals and treatment for the injured, the aftermath of the attacks has left many areas with little civilian movement and minimal economic activity. Consequently, similarly to Sri Lanka’s experience with the surge of remittances following the Boxing Day Tsunami in 2004 (although not on the same scale), extra remittances are now likely to flow in to support the kith and kin of Sri Lankan-origin migrants who have been affected by the tragedy.

Specifically, two of the targeted churches were in areas known to be home to many migrants and recipients of remittances. Zion Church is in Batticaloa in the Eastern Province, which accounted for 17  per cent of annual departures from Sri Lanka in 2017 (Figure 2), and forthcoming research shows that Batticaloa district has the highest proportion of households with international migrants. For example, 17.78 per cent of households in Batticaloa have a migrant overseas, while 21 per cent of households in the district receive international remittances. Similarly, the attack in Katuwapitiya is not too far from the area known as ‘Little Italy’ in Wennappuwa, named due to its buildings’ resemblance to Italian architecture, financed with remittances originating from Italy.

Figure 2: Remittances and the Eastern Province 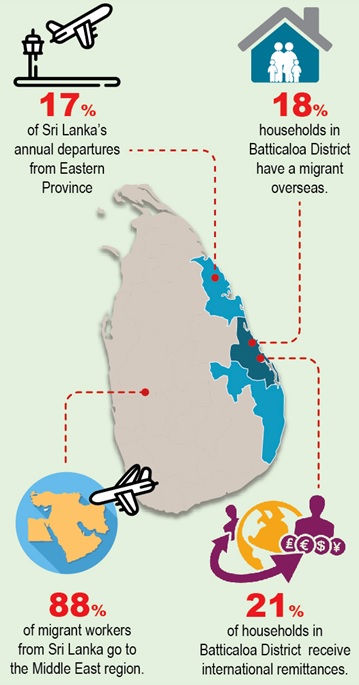 The short and medium term

As such, taking into account the locations immediately affected by the devastation and its ripple effects, a short- to medium-term impact on foreign exchange earnings is likely to be experienced in Sri Lanka. The tourism industry, despite once being well-positioned to continue its upward trend in foreign exchange earnings, is now likely to experience a temporary downfall, while international remittances, which were experiencing an incipient downward trend, are likely to experience a temporary upturn in the aftermath of these attacks.

In the medium term, if the security situation improves, the rebuilding efforts will help the tourism sector to pick up. On the other hand, regardless of improvements in the security context, migration to and from Sri Lanka is likely to undergo greater scrutiny. At the same time, appropriate measures need to be introduced to curb unfavourable social remittances in the form of Muslim extremism transferring from the Middle East to Sri Lanka and homing in on the Eastern Province. Therefore, in the medium term, the elevated scrutiny of out-migration from the Eastern Province, particularly to the Middle East, is likely to result in a decline in departures and associated remittances.

Dr Bilesha Weeraratne holds a PhD in Economics from the City University of New York, USA. She is currently a Research Fellow and Head of the Migration and Urbanisation Research Institute of Policy Studies of Sri Lanka.

Indian elections 2019: women candidates to watch out for
The climate-food-conflict connection in Indonesia